Hello again, readers! This week I'm pulling double duty, since Konami was kind enough to drop the new Yu-Gi-Oh Neuron dueling companion app for all of us in TCG territories. I've already been messing around with it pretty extensively, so I wanted to discuss some of the coolest things I've found in Neuron so far.

Personally I'm always a sucker for apps and any little additions that can make the time I spend dueling easier and more enjoyable, so when I saw Neuron hit our shores, I instantly downloaded it to give it a whirl.

It's An Official Product

Many duelists have used unofficial calculator apps over the years with varying features. Despite the fact that Konami's official tournament policy makes it verboten to use your phone or a calculator as your exclusive method of tracking Life Points, lots of people did it at locals anyways.

But yeah, Neuron's an official product distributed by Konami Digital Entertainment, and the website copy recognizes it as a valid option for tracking Life Points, saying it's "Supported at official Yu-Gi-Oh! tournaments." Tournament policy in European territories already allow players to use it on the dueling table too, and it's very likely we'll see the same policy adjustment for other territories very soon. That's huge, and it fuels the hope that maybe in the future we'll see Neuron allowed at Tier 2 or even Tier 3 events, perhaps with some minor changes that can address little problems like incoming messages showing on your phone's screen while you duel.

It Translates Your Cards

If you've ever played in a big event or even a larger local, there's a good chance you've encountered someone using non-English cards; TCG cards printed in German, French, Italian, and other languages are often popular for differences in printing technology or just the flex of having a version that few others have in your area. While it's perfectly within your right to use any TCG legal card in your deck regardless of language, there are some additional rules that need to be followed. You need to either have a second copy of the card with you for reference, or have translations printed or written for your opponent.

If you use an English printing of the card as your reference, you can't keep it in your deck box because it's counted as part of your deck, which can incur serous penalties. Whatever method you chose, it was an awkward process that could often confuse both players. 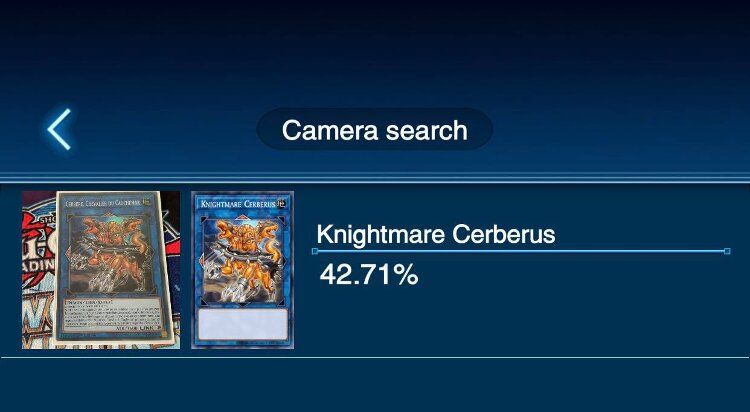 That all changes thanks to Neuron. Now duelists can just snap a quick picture of the card in question and the exact text gets pulled from the official card database, in your native language. That's a tremendously useful tool that seasoned players will definitely take advantage of, and it's going to make some of the most common problems in tournament competition a non-factor. One of the worst parts of playing with and against cards in languages you don't speak is having to carefully word your question about the card so you don't give away free information. Now, you can simply pull it up in Neuron and not worry about giving your opponent any insnight into your plans.

This is one of the features I don't expect many people to use, just because counters aren't common in most formats, but it's cool regardless: Neuron can track up to four sets of counters in play. Lots of duelists use dice to keep track of counters, and while that's convenient, it's actually not allowed in official tournament play. Unfortunately Neuron can only track counters on four cards at a time right now, but it's a neat feature nonetheless.

Neuron gives you a new, easy way to track the total number of counters on individual cards, up to 99 counters each. I mean, I hope nobody ever has that many counters on any card. Please tweet me if you have, because if so, I need to know the back story to that.

It Remembered To Bring Your Dice

You'll find another awesome tool in the calculator section; an in-app dice feature, as well as coin flips.

Let's be honest, we've all been there. We've all been "that" person who forgot to pack dice, stuck asking neighbors and shouting out for help like some Dickensian figure panhandling for gaming supplies.

But now as long as you have Neuron, you always have the necessary tools to ensure smooth gameplay.

Neuron's randomization tools also take away concerns about variance, worries about dice falling off the table, coin flip tricks, and rigged dice if those are the things that keep you up at night. Giving duelists peace of mind, as well as an officially sanctioned method of randomization for effects, is nothing short of invaluable.

Hopefully in the future, Neuron can include some customization features in the displays for these tools, to give some more individual flare to each duelist's app. Please Konami, I need to include my Duel Links coin in Neuron, I love it more than any human being should ever love a shiny metal disc.

I even named my personal coin. Here name is Wendi.

Anyway, that got a little personal. MOVING ON…

This one's really going to be helpful should tournament protocols allow Neuron for tournament use in competitions of any tier. Being able to go back and see all the changes to Life Points over the course of a game is huge, because it helps ensure the state of the game is clear at all times and it keeps both players on the same page as to where the game's currently headed.

The calculator log's also a tremendously helpful tool for any judges who need to review changes to Life Points during a dispute, to reconstruct what exactly happened over the course of the game. There's even an 'undo' feature which can help correct mistakes made without logging them, avoiding any awkward questions in the future.

Another cool thing about this feature, is that you can actually record what deck you used during a match, as well as whether you won, lost, or drew. There's even a section to take post-game notes, why is my favorite part. Your opponent's name, deck info, and any noteworthy parts of the game can all be tracked within the app. That's awesome for players like myself, who like to take notes of any mistakes made during matches and anything special they want to remember.

You can also lock the log, so that specific information won't automatically cycle out, as the app only tracks thirty duels at a time. That limitation's definitely something to keep in mind, but it should be enough to get you through a day of dueling, and this feature's a pretty neat way to track some of your most memorable duels.

It Stores Decks You Totally Forgot About

For me, this is where the Neuron app really starts to shine. Any deck you've made using the official card database will be saved on the app, which is awesome. I found a deck I played eight years ago on here that I totally forgot existed. You can also build decks on the app, which is another great tool. You can even use the camera to help input the cards into your decklist, saving a ton of time. 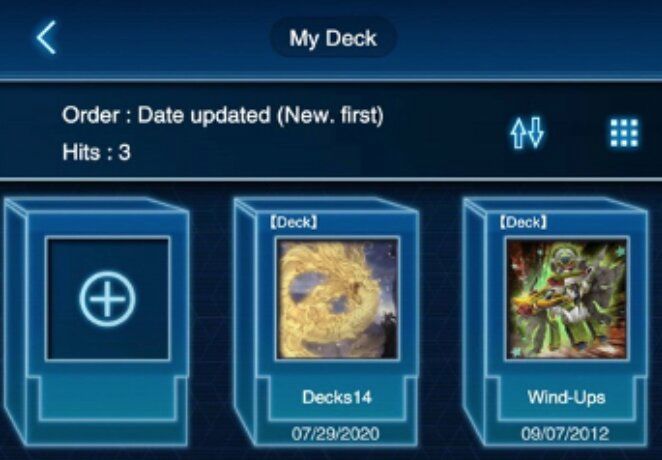 From there, you can even run test hands! Currently Neuron can just simulate your first five draws to give you a test opening, but the amount of information you can gain from that is extremely valuable. Maybe in the future they'll make it so you can run hands through further simulations, like some unofficial platforms allow, to practice combos and play sequences.

One of the smaller, but extremely useful additions to the app, is that you can actually view the most recent changes to the Forbidden & Limited List, as well as link to the full list for a complete reference. 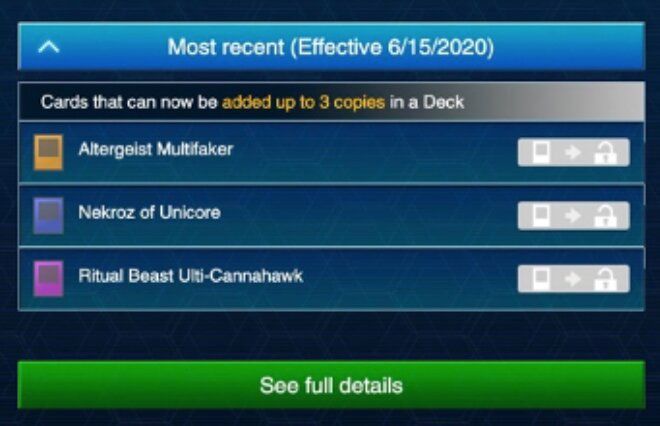 If you're like me, you'll often forget certain cards on the list since many of them haven't seen competitive play in so long. Or conversely, you might forget newer changes because they're so recent that they haven't quite sunk in yet. There's also a neat little note explaining some of the Advanced Format design philosophy as well; it's rare for Konami to share insights like those, so any time you can get a bit of information, it's pretty great.

It Shows You Decks All Across The World

Another surprisingly neat feature is that you can search decks that have been saved into the database, giving you insight into what other anonymous duelists around the world are trying. This is especially cool to me, because often I'll have a really random idea and then have no idea how to start building it. Being able to search any deck, in the TCG or the OCG is awesome. 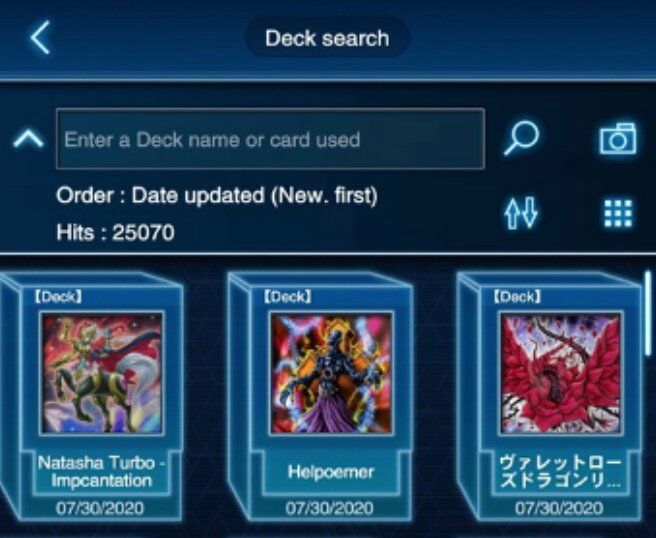 Take Shaddolls. If you're new to the strategy and want to take your first bite into competitive play with it, you can do a quick search on Neuron and see that the Invoked variant is extremely popular. That can then help you recognize the synergies between those strategies, and help you sculpt your build. The deck search tool can be extremely valuable if you're willing to take the time to explore.

It Helps You Find Cards You Need

Similar to the deck search tool, Neuron also has an option to search for specific cards. As seen in the screen cap below, I searched for every card in the database that included the word "draw". Let's say you wanted to search up Pendulum Monsters. You can do that, and order the results from high Scale to low Scale, vice versa, and sort the results in other ways as well. 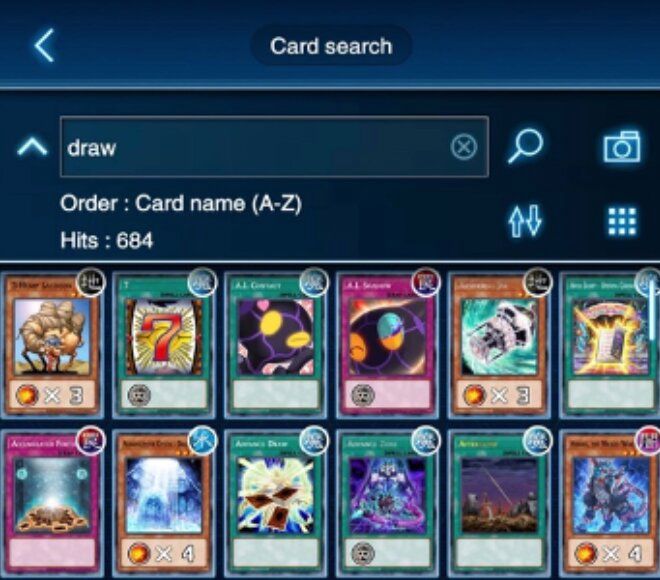 My favorite application for this feature is to keep ideas I find interesting a secret. When I play at locals and see a card that I'm unfamiliar with, I try and keep my interests to myself so that my local competition don't know to prepare for it. It's the little things that can make this app truly valuable.

It's Got EPIC Background Music

Okay, so this feature's pretty silly, and probably useless. That said, it's my absolute favorite, because it's just so ridiculously over the top. I can't imagine a world where you want some zany music blaring while you're playing Yu-Gi-Oh but if you really want that, it's now at your fingertips. Maybe some kids will download the app and have some epic games with their friends, and in that case it's totally worth having.

There are other cool features in Yu-Gi-Oh! Neuron that I didn't mention, and there may be more that I haven't discovered yet. You're able to keep up with product news, and general news as well, which is pretty handy – I'm sure we all have players at our locals that are always asking when a new release is coming out, and now that information will be easier to find than ever before. There's even a timer included in the app so you can make sure you're playing at a good pace when you're practicing!

Overall Neuron's a really neat app, with a lot of potential and a ton to offer. If you haven't checked it out yet I'd definitely suggest you download it and give it a shot. Until next time, play on!