Gruul is one of the ten guilds first introduced in Magic the Gathering's Ravnica: City of Guilds, and includes the red and green color identities. Mark Rosewater, Head Designer for MTG, has noted that red and green share many similar capabilities, including land destruction, power boosting, and access to mana ramp. Gruul excels at quickly ramping into large and aggressive creature threats. In Commander, Gruul associates with decks focused on landfall, +1/+1 counters, and attacking with huge threats. Commanders such as Omnath, Locus of Rage, Hallar, the Firefletcher, and Xenagos, God of Revels all align with the Commander deck strategies mentioned above. Although there are many excellent mono-colored red and green card choices for Commander, far fewer gold-colored RG cards are worth consideration. To assist with identifying potent RG cards for the 99 of a Commander deck, here are 10 Gruul cards you should be playing, ordered from lowest to highest casting cost. Modern Horizons 2 introduced a slew of outstanding, new-to-MTG cards for Commander and other formats. Goblin Anarchomancer is an excellent two-mana common that supports Gruul's game plan by reducing the casting cost of any red or green spells by one colorless mana. Practically every Grrul Commander deck can take advantage of Goblin Anarchomancer's ability to cast most spells earlier than expected. It is worth noting that Goblin Anarchomancer does have a few drawbacks: it cannot fix mana, provide mana for activated abilities, or reduce the casting cost of colorless cards. Nevertheless, Goblin Anarchomancer has strong synergy with Wulfgar of Icewind Dale, Wort, the Raidmother, Klauth, Unrivaled Ancient and other prominent Gruul commanders. Hull Breach is an appealing two-mana Gruul spell because it can provide a 2-for-1 by destroying an artifact and enchantment. Even with only one valid target for Hull Breach, it is still an efficient and effective card option for Gruul Commander decks. Cards with similar effects, such as Force of Vigor and Return to Dust, are often more expensive to purchase or require more mana to cast. First printed in Invasion, this Gruul enchantment is meant for aggressive creature decks. Fires of Yavimaya grants haste to creatures you control and can boost a target creature +2/+2 until the end of a turn by sacrificing it. Haste is a helpful ability that supports Gruul's primary strategy of attacking opponents. The additional ability to provide +2/+2 to a target creature can save it from dying in combat or from spells like Languish. In Gruul decks, Fires of Yavimaya may be better than Fervor due to its pump ability. Fires of Yavimaya also adds a duplicative effect for the next card on this list when in a Commander deck.

4. Rhythm of the Wild Rhythm of the Wild is an excellent Gruul card because it offers two practical abilities for only three-mana. Rhythm of the Wild provides riot to nontoken creatures you control, which gives a creature haste or a +1/+1 counter when they enter the battlefield. In addition, Rhythm of the Wild prevents creature spells you control from getting countered. Any blue mages looking to counter Tovolar, Dire Overlord, Ruric Thar, the Unbowed, or Neyith of the Dire Hunt will have their plans halted by Rhythm of the Wild. No matter which creature-based Gruul deck you build for Commander, this card should probably be in the 99. Domri, Anarch of Bolas is a three-mana planeswalker card that sees play in many Gruul Commander decks, and offers several abilities to complement their deck strategies. Besides loyalty abilities, Domri, Anarch of Bolas boosts your creatures' power by +1/0. For +1 loyalty, you get to add R or G to your mana pool, and creature spells cannot get countered for the turn. Lastly, the -2 loyalty ability makes a target creature you control fight a target creature you don't control. Any Gruul creature decks interested in the fight mechanic or attacking with creatures can probably utilize Domri, Anarch of Bolas' abilities effectively. Neyith of the Dire Hunt, Zilortha, Strength Incarnate, and Zangief, the Red Cyclone are a few commanders that may benefit most from adding Domri, Anarch of Bolas. Decimate is a Gruul sorcery that was recently reprinted in the Upgrades Unleased Neon Dynasty Commander Deck. For the low price of four mana, Decimate destroys a target artifact, target creature, target enchantment, and target land. Achieving a 4-for-1 is amazing in Commander, as long as there are enough targets to cast Decimate. 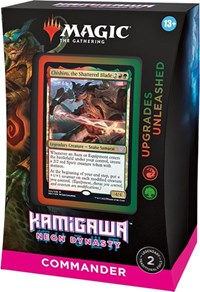 There should be several opportunities to cast Decimate during a Commander game to maximum effect. Even if you don't have four distinct targets, you may target a permanent multiple times if it has a combination of typing. For example, Phyrexian Metamorph will fulfill the artifact and creature target requirements for Decimate. Innistrad: Crimson Vow provided Gruul with Halana and Alena, Partners. This legendary 2/3 Human Ranger with first strike and reach is an outstanding inclusion in the 99 of a Gruul Commander deck. Halana and Alena, Partners blocks small flyers, puts X +1/+1 counters on another target creature you control equal to its power at the beginning of combat on your turn, and gives haste. Savage Ventmaw's mana production may assist with casting Dragon commanders like The Ur-Dragon, Karrthus, Tyrant of Jund, and Klauth, Unrivaled Ancient. Additionally, Wulfgar of Icewind Dale can double Savage Ventmaw's attack trigger, providing you with 12 mana to spend until the end of the turn. Xenagos, God of Revels can bestow a pump effect and haste to Savage Ventmaw, allowing you to recoup its mana cost to cast other spells.