A huge number of new Link Monsters are arriving later this month in Duel Overload, including the long-awaited Crystron Halqifibrax. Some are poised to change the shape of competition immediately, ushering in new combos and delivering a serious boost to previously-rogue strategies. Others have better potential down the road, and could be worth investing in before they reach their peak!

Let's break it all down, card by card.

Crystron Halqifibrax
Crystron Halqifibrax is the hottest card in Duel Overload, and for good reason. It's as much of a combo extender as Summon Sorceress was, and it's arguably the single best Link-2 in the game in terms of sheer value and versatility.

Halqifibrax has two things going for it: first, it's relatively easy to Summon despite requiring a Tuner as one of its Link materials. Second, many of the monsters it can Summon from the deck have some sort of built-in +1 that's activated in the graveyard. Glow-Up Bulb's a 1-card Halqifibrax, or effectively two additional Link Materials when Summoned from the deck. Mecha Phantom Beast O-Lion and Blackwing - Steam the Cloak offer similar value, and both Glow-Up Bulb and Steam are Forbidden in part because of their synergy with Halqifibrax.

There's no doubt that Crystron Halqifibrax will usher in a new era of Link combos, but its release also neatly coincides with the upcoming Master Rule changes. Synchro Summons have been a liability since the beginning of the Link era, but that's about to change when Fusions and Synchros no longer need to use the Extra Monster Zone. Tuners will naturally become more popular as Synchros and Synchro-heavy strategies finally become viable again.

The biggest winners post-Halqifibrax are themes with Tuners without any real way to use them, or decks where Synchro Summoning on your opponent's turn is a huge advantage. There's a lot of potential crammed into Crystron Halqifibrax, and April's Forbidden & Limited List will almost certainly make adjustments based on its arrival. 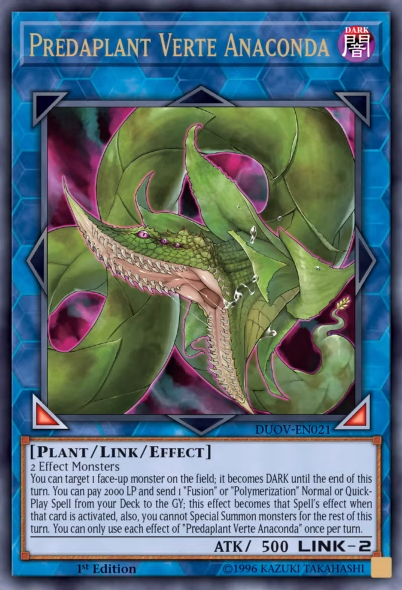 Dragun of Red-Eyes is a fantastic way to end a turn, and it's playable just about anywhere, but for now you'll mostly see Anaconda in decks that are already doing a lot of Fusion Summoning. Shaddolls, Thunder Dragons, Ancient Gears, and plenty of other strategies can use Anaconda as an optional route to their Fusion Monsters. You won't have to pay the costs of your Fusion or Polymerization spell either, which includes restrictions like Red-Eyes Fusion.

Anaconda's first effect is actually surprisingly useful in Plunder Patroll, and shockingly it's also great in Predaplants. Who would have thought?

Its third effect is really important: you can recycle a trap in your graveyard by tributing three monsters, which might sound familiar if you have any experience with Knightmare Gryphon. Auroradon sets itself apart as a Link-3, with two downward arrows, which is crucial for some combos.

There's a lot to love about Auroradon's flexible effects, and the fact that it can Summon Mecha Phantom Beast O-Lion or Mecha Phantom Beast Coltwing from the deck for even more Link plays is a big part of that. You can continue to Link Summon as much as you want as long as you don't activate Auroradon's first effect, but you can Synchro Summon, and those Level 3 Tokens might as well be asking you to Summon Trishula, Dragon of the Ice Barrier.

Sovereignty's End Phase effect can Special Summon a high-Level negation body like Mist Valley Apex Avian straight from the deck, or simply fetch a lower Level monster that provides some sort of value on your next turn. You can even Summon Barrier Statue of the Stormwinds to block virtually all of your opponent's Special Summons while keeping it from being targeted by card effects. Obviously this monster works best alongside the Simorgh support to keep your opponent's backrow clear, but I think it'll still end up seeing play in rogue Winged Beast strategies in the future.

Reptilianne Echidna
Reptilianne Echidna's a throwback to another casual theme, but this one has an interesting history. Reptiliannes were never competitive on their own, largely thanks to a set of underwhelming Main Deck monsters. Echidna won't make dedicated Reptilianne decks playable.

That said, Reptilianne Vaskii was once a serious competitive tech way back in 2010 when Dandylion was seeing significant play. Card removal's cheap these days, but I can imagine Echidna becoming an interesting tech choice along with Reptilianne Lamia and Vaskii.

There's potential to build a small engine where Summoning Lamia and then Link Summoning Echidna would perfectly set up Vaskii: a card you can search with Echidna. You could destroy three monsters with this play with a two-card investment, but I think we'll need more Reptile Link Monsters before Echidna becomes truly viable. 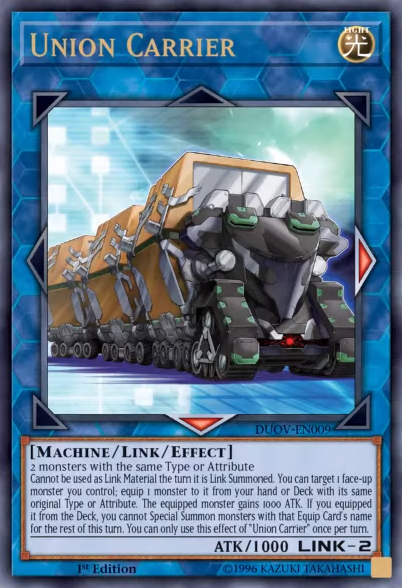 Union Carrier
ABC-Dragon Buster players are about to get a significant upgrade with Union Carrier, but they're not the only ones looking forward to equipping monsters from the deck. Union Carrier is a must-play in some themes that are based around equipping monsters, including ABCs. It's less helpful if you want to Summon the equipped monster straight away, but there's a ton of value in simply equipping a monster to trigger its graveyard-activated effect.

Outside of ABCs you'll probably end up seeing Union Carrier in decks with plenty of Dragon or Dark monsters where it can equip Dragon Buster Destruction Sword from the deck. Currently that combo is something only Plunder Patroll Captain Blackbeard can pull off, but with Union Carrier you'll be able to lock your opponent out of their Extra Decks in many more strategies.

But Summoning Black Rose Dragon on your opponent's turn can be devastating if you time it right, so the Quick Effect Summoning is handy. Its graveyard effect adds a bit of recovery to the Rose Dragon engine reviving Special Summoning White Rose Dragon too, which can in turn Summon Red Rose Dragon alongside it.

Unfortunately both Rose Dragons are best used for Synchro Summoning, not Link Summoning. You'll want to leverage your Plant monsters first, then start spamming the board with Black Rose Dragon.

I don't want to oversell it, but if you can't get Crystron Halqifibrax you'll definitely want to get your hands on Protector Whelp. It doesn't do much more than Halqifibrax already does for the deck, but its ability to Summon a Buster Blader from your hand can occasionally save a duel.

Protector Whelp won't fix the deck's biggest issues, including its dependence on an uninterrupted Normal Summon. But still, there are a few 1-card Buster Blader lockdown combos floating around using Link Monsters we won't see for a while yet, where Protector Whelp and Mecha Phantom Beast Auroradon effectively search Prologue of the Destruction Sword without Summoning a Destruction Sword card.

Ancient Gear Ballista
Ancient Gears can put a massive amount of damage on the board on short notice, but what happens when you don't open with Ancient Gear Catapult, or your Ancient Gear Wyvern's negated?

Those situations are where Ancient Gear Ballista really shines. Ballista by itself isn't the ideal opening, and you'll still want to resolve Geartown and Catapult together, but it's a solid recovery play when your initial push is interrupted. A Link-2 with a solid removal effect is a handy addition to most themes, and Ancient Gears can leverage it very effectively while searching out a key combo piece.

I think many Ancient Gear players will end up playing the Scrap engine anyways, but Ballista's an excellent Extra Deck option that can correct some truly terrible openings.

Herald of Mirage Lights
How often do we get a Link-2 with an actual negation effect? Herald of Mirage Lights might be hard to play outside of Fairy themes, but it's a very solid Extra Deck pick for those strategies thanks to its spell and trap negation. Its tough material requirements and extremely specific activation conditions make it nearly impossible to play outside of dedicated Fairy themes, although I imagine someone will try to make it work in World Chalice or another theme with searchable Fairy monsters. I think Mirage Lights is just waiting for its moment in the spotlight, even if its future is a little more up in the air than Predaplant Verte Anaconda.

Again, not every single card here is ready to break the game in March. Many of these cards have significant potential down the road when a new Reptile, Winged Beast, or Fairy theme emerges, or when a certain Red-Eyes Fusion Monster makes its way to the TCG. It's easy to overlook these new cards when Crystron Halqifibrax and reprints like Fantastic Dragon Phantazmay and Infinite Impermanence are drawing so much attention. There are even more Links waiting to be discovered in Duel Overload, and plenty of strategies to revisit after the set launches.