My first-ever SCG Open was in New Jersey, clear back in 2011. I had just started my permanent (ha ha) writing gig for SCG, and thought that I Had Finally Arrived. I confidently strode up to then-editor Steve Sadin and introduced myself, and he asked if I had any Valakut stuff he could borrow. I didn't, but was assured that that was okay and by the way, we're out of SCG t-shirts.

I assumed all of my opponents knew who I was, which is the best way I can think of to learn this fact: Assuming people know who you are only for them to have no recollection of you whatsoever is a bad look. That applies to almost no one, but is nonetheless an important fact for every content creator thinking about traveling to a Magic tournament to internalize and stay mindful of.

From August 2011 to August 2012, I had a weekly column called 52 FNMs, where I went to FNM every week and played a different deck every week for 52 consecutive weeks. It sucked. The column was okay, I guess; people either told me they liked it or that I was a jerk, which tidily sums up the feedback I get to this very day. The part that sucked was having to go to events on Fridays every week. Having to play a new deck also felt terrible really quickly. I got into the dregs of the format faster than I would've liked, and the majority of Standard decks then had trouble handling a Delver of Secrets into Mana Leak. This experience definitely had an influence on my present tolerance level of decks that aren't competitive against established metagames. We'll get to that at some point, but not today.

That said, this is why we're here:

A couple of things about that tweet stand out. The requisite number of likes was achieved, yes, but the remarkable part that that tweet embed doesn't show is that it was hit in less than an hour. The west coast wasn't even awake yet. Also noteworthy is that that tweet is roughly two years old. I think I still have some lingering shell-shock from dragging myself to my LGS every week just to play some random person's pile of cards in the name of novelty only to get annihilated by the regulars that didn't have to change decks every week and thus were free to develop proficiency with a deck of their own choosing. HOW NICE FOR THEM.

What you're reading is the reboot of 52 FNMs (there are 104 now, including the ones from the last time). Am I going to play 52 Friday Night Magics? No. I'll play a bunch of FNMs, but 52 is a ton. I'd like to go on vacation at some point in the next year, and forced FNMs really put a damper on that (trust me). I'll play whetever event I feel like. Am I going to play a different deck every week? Good lord, no. If YouTube booster box openings are living proof that, barring weird circumstances, you should never open sealed product, then the original 52 FNMs column was a case study in why it's safer not to brew if your goal is to win as many games as possible. The prevailing sentiment in more casual circles is that there's nobility in original ideas. That's not true, but clinging to that idea will help you lose a lot of games.

Will three articles a week for a year literally kill me? That's unclear! There's really only one way to find out — read every word of every column.

I work at TCGplayer HQ, and every Tuesday night at six, we draft Amonkhet. They're put on by my coworker pal Dennis, affectionately nicknamed Sped. If you've been around Magic a while (read: 20 years or so), you'll recall that there was a team of players called Team Sped, mostly active in the late 90's. Here's the etymology of the nickname Sped: 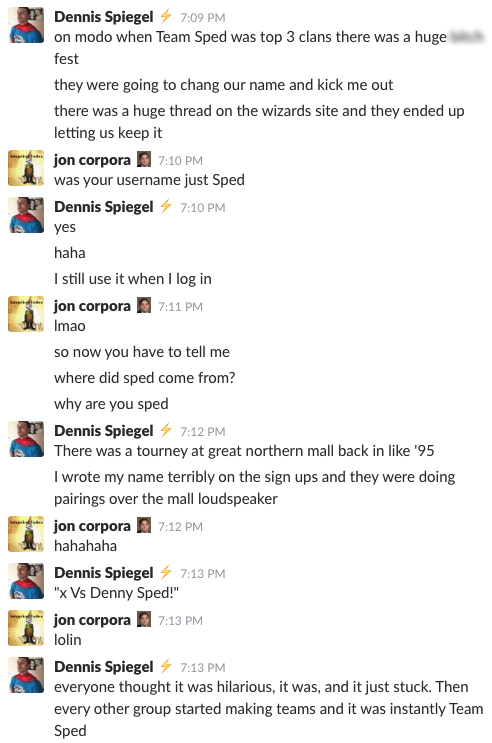 Ever since the Pro Tour, I've been trying to make the crazy one-two-three drop breakneck aggro deck work. If you don't know what I'm talking about, consult this video:

I don't know if I've ever seen an archetype stray so far from conventional wisdom. The Dampen Thought deck from Kamigawa block comes close, but that was more than ten years ago at this point and barely applies. I'm always interested in fringe draft strategies—particularly what their originators identified as a deficiency in the format in order to adopt the strat. The Calcano video above is worth a watch because he breaks down what he saw in Amonkhet drafts — the one-drops were undervalued (Slither Blade in particular), and a curve of one-two-three beats a curve of two-three-four.

I've been trying to get a handle on that strategy and have forced it in most of the drafts I've done since Pro Tour Amonkhet. This is where I ended up last night: 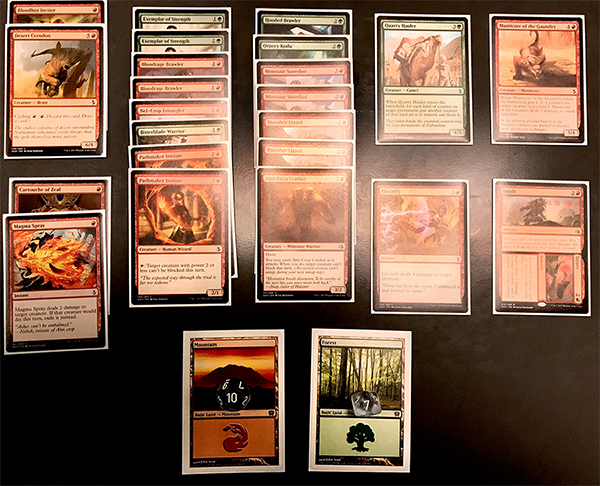 Things didn't go quite to plan.

My first pick was Archfiend of Ifnir, which pulled me away from pursuing an aggressive strategy in an instant. However, my neighbor feeding me, Meaghan, cut black pretty effectively. It helped that I got late copies of both Bloodrage Brawler and Exemplar of Strength in pack one to clue me in to the fact that I should look somewhere other than black for colors to play.

There's a dichotomy in Amonkhet Limited between "I want to draft an aggressive deck with a low mana curve" and "I'm drafting green." Oashra Cultivator and Naga Vitalist aren't playable in an aggressive deck, and Bitterblade Warrior is perfectly replacement-level — not what you're looking for for your aggressive deck. Uncommons really tie things together though.

My toughest pick came early on in pack two: the second Bloodrage Brawler over an Electrify. I had gotten my second Exemplar of Strength at that point, and figured that a fourth ginormous two-drop would be better than a removal spell of dubious efficiency. I ended up picking up an Electrify in pack three anyway, so all's well that ends well I guess.

This should've been a 16-land deck with a Brute Strength, but I got too conservative in the face of Manticore of the Gauntlet and Insult // Injury, the latter of which is preferable to play as a six-drop. The only time I ever got to cast it in three rounds was when I discarded it to a pre-combat Bloodrage Brawler and cast Injury to kill an Honored Crop-Captain and win the game. In my defense, I only had five lands.

My three matches were non-competitive, a 3-0 6-0 in which I played against decks that had a much higher curve than mine did. My closest match was round one against one of our remote developers — he had a white-red deck with two Honored Crop-Captain and a bunch of Rhet-Crop Spearmaster and other such things, but couldn't really stop me from chipping in early damage with my suite of gigantic two-drops; flooding the board and coupling that with some carefully-placed attacks and removal sealed the deal.

Many of the matches played out like this. A 4/3 on turn two is really not a thing that's supposed to happen, and they often made for lots of novel circumstances that culminated in me winning the game. I'll take it.

I didn't get much wins playing 52 FNMs the first time around, so a 3-0 6-0 on my first outing feels pretty good. Here's to many more.