Last week, some Commander 2017 cards were leaked. The circus around them played out like a comedy of errors. The leak poster went by "Turn1Thoughtseize," not realizing a Turn1Thoughtseize already existed in the Magic community. Given Hasbro's strict, arcane, and frankly, vague policy around leaks, the other Turn1Thoughtseize was adamant about clearing his name:

WE DO NOT NOW, NOR HAVE WE EVER, HAD AN INSTAGRAM ACCOUNT. THE PERSON WHO POSTED THOSE CARD IMAGES IS NOT ASSOCIATED WITH THE PODCAST.

From the outside looking in, this is all rather funny. After all, these are wizard squares we're talking about. Pieces of cardboard depicting spells wielded by sorcerers ("Planeswalker" is #brandspeak for sorcerer) — in this case, literal dragons that breathe fire and fly around and stuff. Look, I love Magic. I've given more of my time, money, and potential to the game than I'd like to admit, but if you start taking this stuff too literally, you need to start talking to more muggles.

Perspective is always tricky. I've always preferred to spend my time around other players that know how Magic looks to most muggles. Yes, lots of people will see Magic and become interested in it, but to the broad population, it's a nonfactor. Even in the cases when it appeals to someone on an aesthetic level, you'd better hope the mechanics of a dry, methodical math and tracking game clearly developed by 90's grad students appeals to them or else they're going to feel bait-and-switched by pictures of hydras and fireballss.

Content creators are uninterested in this narrative. For their audience, Magic starts as a hobby, ultimately culminating to an escape. Content, immersive, personable content, keeps the escape going. This isn't a condemnation of casual Magic content — it's just a fact. I would never fault anyone for not actively seeking out malaise and melodrama and GRITTY REALISM in Magic content. Casually-geared content actually makes the most sense, given the aesthetics of the game; like I said before, it's all just wizard squares at the end of the day. The cards have no pretense. Why should the content? The juxtaposition between the actual content of content and the stakes involved when you make anything your living is on full display. Having to genuinely worry about toxic YouTuber idiots and keep track of whatever nonsense they decided to convey to the cosmos this time is not a fate I'd wish on anyone. Being affable and present on social media at all times is a massive grind. Burnout — the snap, followed by the public meltdown, is as sad as it is inevitable. Spend enough time online and you, too will show your worst self to the world in some way or another.

The Commander 2017 cards were leaked by someone enthusiastic about having them. They likely observed other content creators selling the narrative that Magic Is Fun!, bought it, and wished to convey the same message. Now they are likely in some non-zero amount of legal trouble. The fact that someone in over their head found themselves in over their head isn't something to be celebrated, but plenty of people did anyway — check tweets from May 26th when you get the chance. Watching content creators laugh at the downfall of someone who, in all likelihood, learned their enthusiasm about Magic from watching them was discomforting. Rarely is cynicism clearer than when someone is reductive towards something they had a hand in creating. As the leaker squirmed, trying to put the toothpaste back into the tube online for everyone to see, everyone's mirth only got worse, which was hard to watch in realtime. Who are the leaks hurting, anyway?

Look at it from the content creator's point of view: Those Commander 2017 dragons ostensibly would have been divvied out among them. Preview cards are more clicks, which means more revenue, which means more opportunities to grow your brand. (For me, they mean I get to script and produce silly things like this:)

Leaks aren't trivial for content producers, but that doesn't mean that they aren't trivial to everyone else. Online is a complicated place, but there's one rule that's very easy to remember and practice that many people forgot last week: don't punch down. It's not a good look.

I did another work draft at TCGplayer HQ last night; I have an Amonkhet Sealed RPTQ coming up and while I'm not entertaining any real notion of doing well (Stybs keeps kicking my ass in practice sealeds at lunch), I'm playing as much Amonkhet Limited as possible so I can say I did my due diligence. This deck didn't go quite as well as last week's: 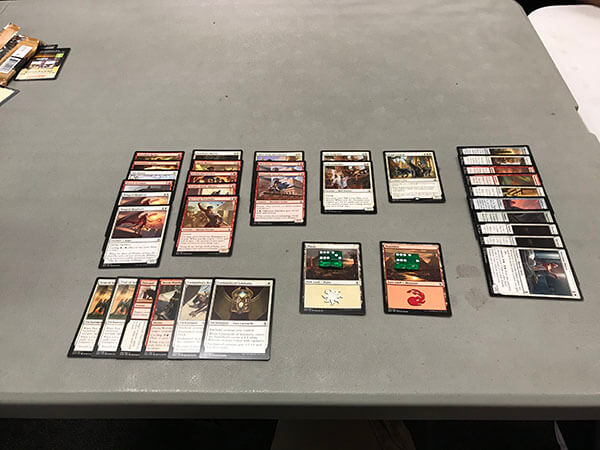 The draft started with an Edifice of Authority over nothing (the rare in the pack was a Bounty of the Luxa). P1P2 was a Deem Worthy and P1P3 was a Trial of Solidarity that I was unwilling to pass, putting me in an awkward spot. I took all the Cartouches I saw and tried to keep my curve low in order to maximize the effect of the Cartouche, but the deck ended up being trash — a hodgepodge of aggressively-skewed cards backed by a bunch of slow stuff. It didn't really come together. I did, however, open a Regal Caracal in pack three, so I had that going for me.

I'd love some feedback on this deck, because I'm positive I didn't build it correctly.

Round one I'm paired against my friend Dave, and looking at his deck, it's abundantly clear why mine was unable to come together: he's got a pair of Gust Walkers, a pair of Fan Bearers, a Cut // Ribbons, a superior curve, and superior card-quality. I am able to take this snapshot of game one though: 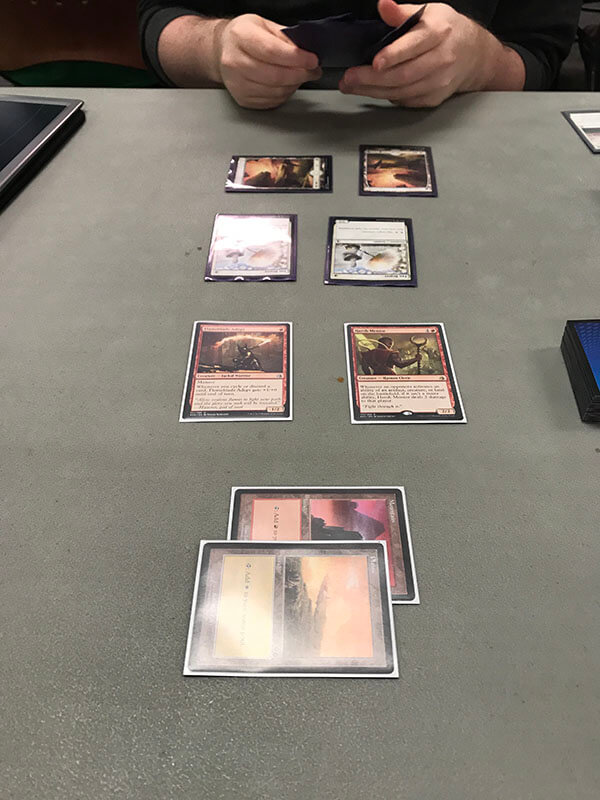 A Harsh Mentor loves to see two Fan Bearers on the other side of the table, BUT I lose this game anyway with Dave stabilizing past his mana screw at eight life. I have an Onward // Victory the entire time but he never gives me an opening to use it and closes the door on me while I flood out. Game two is a lot less close, featuring an Oketra's Monument and a Cast Out on my Regal Caracal after I declare attackers. That does not feel great.

Next round, I play against Vaughn, whom I briefly profiled here, playing a black-green deck sporting Ruthless Sniper and topping off with Archfiend of Ifnir, a truly miserable matchup for me. I lose very easily, but since it's pack-per-win, I must trudge on.

I eventually earn that pack by dunking on an opponent who was mana-screwed every game. The dream lives on!

If all goes to plan, there's a PPTQ in my (and yours, dear reader) future this weekend. Wish me luck.