Suspense is the worst. I hate it. As a result, every winter from when I was 13 years old till I was 17, I went into my parents' bedroom and found all my Christmas gifts. I did it every year. I recently started confessing this to more and more friends, and they all look at me with disgust. "Doesn't that ruin the surprise?" I'm not here for the surprise, my dude! I want the damn gift! If I think I'm getting Guitar Hero but I'm not, I want that information as soon as possible.

This dumb personality trait extends into how I watch movies. Like I said, I hate suspense, so I always spoil endings for myself by looking up the plot on wikipedia so I can relax and appreciate the film for what it is. That one's really strange, I admit. Girlfriends past and present loathe it, let me tell you. It's not like I even tell them how the plot unfolds, but yeah. Try the line "I'm gonna look up how this movie ends" to a significant other in a theater and let me know how that goes.

So yeah, I appreciate that while I am super-duper-ultra-mega weird about spoilers, people are generally put out by stuff revealed ahead of schedule.

Last week, while all the fine makers of #content were in Las Vegas, the Ixalan rares and mythics were leaked in the form of an uncut sheet. The picture is out of focus, but I have no doubt (and you shouldn't either) that the Reddit hivemind is going to figure out the exact text of what every card does. Depending on your perspective, this is a disaster on par with New Phyrexia "godbook" leak, although Ixalan's release isn't for another three months, making this most recent incident worse by comparison.

At the moment, it's easy for content producers—that is, those privileged few that make their entire living off outward-facing content about Magic cards—to say that the Ixalan leak is an ill-gotten gain and that they're to be ignored. We're in the thick of Hour of Devastation preview season (our card went up today!) and while Aetherworks Marvel was banned, there haven't been any Standard events and there won't be any meaningful ones until after Hour of Devastation is legal. So there's lots to talk about right now!

A selling point for the "let's put our heads in the sand" approach is that the Ixalan leak isn't good for anyone. From the top on down, not many people are happy about the leak; its existence creates a lot of problems. Here's an issue that effects less than 1% of Magic fans but is still worth mentioning: Ixalan preview season from a content creator's perspective. We got an Hour of Devastation preview card just like everyone else, but I have no clue what's going to happen during Ixalan preview season. If the card TCGplayer gets to preview is a rare from the sheet that got leaked, it doesn't matter how much editorial posturing we did—at the end of the day, we still got a card everyone already knew about. The toothpaste is out of the tube no matter how badly everyone wishes it wasn't.

Whether or not propagating the leaks is right or wrong depends on your perspective, but as always, broadly applying your perspective to everyone else is not a good look. It's easy to not talk about Ixalan now, but if Hour of Devastation Standard gets stale ahead of schedule, don't be surprised to see more and more folks walk back hard stances on not covering the leak. At the end of the day, it's tough to argue that a leak of one of Magic's major yearly releases is not news. Of all the hills to die on, that seems like an especially dubious one.

After last weekend's play Magic nonstop extravaganza, I felt that a nice, quiet work draft would be a nice change of pace. 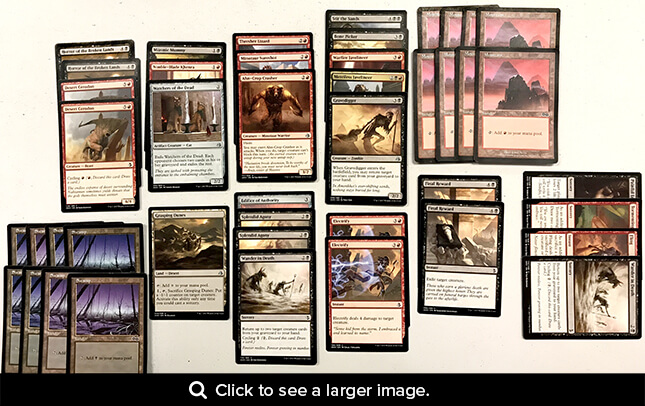 I take Stir the Sands over Rags // Riches p1p1. Not a particularly close pick, but worth mentioning. I'm thrilled to get passed Dusk // Dawn p1p2 and try to cement myself in a grindy ol' zombie deck, but I get shipped a ton of red and no more white. I feel as though I did a decent job cutting both my colors but pack two's pretty awkward — I see almost no black cards. I end up with no rares but am happy enough with my deck; Ahn-Crop Crasher and Merciless Javelineer cosplay well enough as rares that I don't mind.

Round one is uninteresting — I dunk on a mana-screwed opponent both games — but round two's pretty fun. I'm paired against the neighbor to my left during the draft, and it turns out he took the Rags // Riches and settled into a Sultai control deck splashing red for a Trial of Zeal. I'm able to win game one on the back of Wander in Death and Gravedigger (wombo combo IMO), and for game two I sideboard out all my two-drops for Tormenting Voice, Painful Lesson, and a second Wander in Death. The matchup magically gets way, way easier when I have so many ways to get ahead on cards.

The finals are against good ol' Sped, and he's get the white-black zombies deck you dream about: Double-Wayward Servant, Liliana, Death's Majesty, and wall-to-wall zombies. His deck also features double Vizier of Remedies, which are a nightmare for my other-wise awesome Merciless Javelineer and pair of Splendid Agony. I lose game one after being forced to Final Reward a Vizier of Remedies, and think I'll lose game two in a similar fashion, but Merciless Javelineer plus Horror of the Broken Lands outmuscles his offense before Liliana, Death's Majesty shows up. Then he get mana-screwed in the decider and I win. Limited is easy!

See you next week.