Hello again, readers! This week we're diving into another topic to sharpen your skills as a deckbuilder and a player, helping you better understand the choices you make every time you put together a new strategy.

Let's face it, math isn't fun and doing all the number crunching to find optimal ratios for a new build can be exhausting. So I did the work for you. If you want to know the odds of opening with your best starters, your biggest combos, or you're just wondering how many hand traps you should run, I've got your back! Today we're going to look at key numbers that can make you a better deckbuilder.

Seeing Single Cards
Let's kick it off with one of the biggest benchmarks in deckbuilding: what are the odds of seeing a single copy of a card you need in your opening hand? If you're looking to open with a card you run three of like Adamancipator Researcher you've got a 34% chance to see it in your first five cards. Why's that important? Well, Researcher's the best starter card in the deck, and it's also an extender, so you want to max it out and draw it in as many games as you can. What if you don't see it in your first five cards? You're looking at a roughly 5% increase on each subsequent draw until you see your first copy.

How about a card you play two copies of? Say... Pot of Desires? In that case you're looking at a 24% chance of having at least one copy in your opening hand – about once in every four games. That's important because that 24% represents the odds of seeing any Semi-Limited card in your opening grip. With each draw your chances only increase by a rough 4%, so you're losing a lot of power there.

At first glance it doesn't seem too extreme. But think about those 1-in-4 odds when applied to say... four games? Compared to the 34% chance to draw a three-of, that's suddenly an entire extra game where you won't open with that card. There are times to run two-ofs, but we'll dive into that later.

How about those sweet Limited cards? Want to know how often you'll score that gorgeous Ultimate Rare Terraforming, that game-winning Imperial Order or even a game-losing Salamangreat Sanctuary? The answer's a mere 13%. On average, assuming you go first and start with five cards you'll see a Limited Card – or a card you chose to run only one copy of – only once in every eight games.

The odds of seeing those high-impact power cards and painful engine requirements only goes up by a rough 2% chance per draw beyond the first five, which is why we see players "cheat" them into the game so often. Curious, the Lightsworn Dominion and Knightmare Gryphon come to mind as the best examples of effects that can reverse toolbox your one-ofs into play. Those cards that let you bypass the need to draw your singletons altogether are really powerful, because you just won't see them very often otherwise.

These numbers are incredibly important for lots of reasons when you're putting together any deck, but most importantly they let you make informed decisions when you're building around key combos. Knowing the odds of seeing individual cards is great, but let's look at the numbers that determine how often you'll see them in combination. 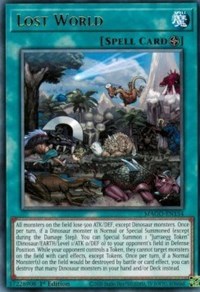 Seeing Combos
Let's say you're building a Dinosaur deck. You want to open with Souleating Oviraptor to start your plays, and Called by the Grave to secure it against hand traps. With three copies of Oviraptor, the odds of opening with at least one copy is 34%. With three Called by the Grave, the odds of opening with one of those is the same: 34%. But if you want to see both cards in your first five draws, your chances drop to 10%.

If your deck runs one key starter card and one key extender to go with it, that's how often you can expect to see those exact cards in your opening hand. Going second that 10%'s boosted to 13%, which isn't a big increase, but it's worth noting for those go-second strategies. Even if you're going first, that's how often your opponent can expect to see say... Evenly Matched and Dark Ruler No More together before other deck thinning cards are added to the mix.

What does that mean? That's a rough idea of what you can expect your openings to look like in Orcust if you play three copies each of Orcust Knightmare and Orcustrated Return. That's helpful in two major ways: it shows the weakness of draw cards that can't be activated without another card, which is why Destiny Draw isn't worth running in a conventional Hero deck; but it also shows the power that those cards need to have, to make them worth playing in the first place.

Think back to the most powerful combo decks in the game's history and you'll notice that the main engine cards that were played in triplicate were all incredibly powerful. We can even take a more recent example of SPYRAL and look at the ratios that deck played, specifically triple Magicians's Soul along with triple SPYRAL Mission – Rescue. You wanted to see those cards together as often as possible, and that 10% chance is how often you would do that.

What if you wanted to know the odds of seeing the above combos with a third card? Like Lost World. That sort of perfect combo – at least one copy each of three separate cards you play in triplicate – will only happen 2.3% of the time. That's not very often, and that makes perfect sense. You're getting very specific when you're looking for three-card combos, but it's incredibly useful just to know how long that shot is. Your chances of seeing that 3-piece play increases by a little less than 2% for each draw beyond those first five. The lesson? Don't fret too much: your opponent won't open with Lightning Storm, Dark Ruler No More and Evenly Matched more than once every fifty games. But at that same time, don't build for three-card combos unless you've got some serious search power to set things up.

As a Hero player, nothing feels better than opening with Vision HERO Faris and Destiny HERO – Malicious: a three-of and a two-of respectively. Unfortunately for Jaden fans everywhere, that's only going to happen in about 7% of your games.

Those kinds of calculations can work in reverse too, giving you the odds of combos you may want to avoid. Let's say you run two different cards that both compete for your Normal Summon; you run three copies of one, and two copies of another. In this case the math is similar, but you need to model it a little differently; in this case you're not looking to avoid the combo scenario: you're not trying to dodge a hand with one of each of those two cards, you're trying to avoid drawing any two of the five cards combined. In that case, the chance to draw two competing Normal Summons is 11%. If you go second that becomes a bit of a bigger concern, jumping to more than 15%.

Seeing Double (Or Triple!)
In Yu-Gi-Oh and in real life, seeing doubles can be problematic. It's important to know the chances of seeing two copies of the same card because it's usually undesirable. It's also important to understand just how unlikely it is to see multiples of a specific card you might want, which can help you make more logical deckbuilding decisions.

The odds of seeing two Ash Blossom & Joyous Springs together when you run three of them is less than 4%, slightly fewer than one in 25 games. What if you run two copies instead? Then you'll see both of them together in a little over 1% of your games. It's important to remember that while reducing your chance at the duplicate outcome by 3% sounds great, dropping to two copies of Ash Blossom also means you'll see just one copy in 10% fewer games, which is actually pretty bad. Is that 3% boost in not bricking really worth the loss of Ash Blossom in 10% of your openings? Probably not. That's why it's so important to approach deckbuilding analytically, and to weigh your priorities against each other.

I can't tell you how many players I've seen trying to justify the choice to run Ash Blossom & Joyous Spring, or any hand trap, at two copies instead of three based on the logic of, "It sucks in multiples." While yes, it does suck to draw multiple foreheads in your opening hand, it just doesn't happen so often that it's worth costing yourself consistent access to one copy overall. When you're going second the odds don't get much worse. Seeing two copies of a three-of goes to 5%, which isn't very scary at all. Seeing both copies of that two-of jumps to a whopping 2%.

As you can see, it's not worth skimping on those unsearchable power cards just to avoid scenarios that barely happen.

Let's say you want to know the worst-case scenario: the dreaded three copies of a card like Ash Blossom. Or even worse, three copies of Blue-Eyes White Dragon when you're not in Duelist Kingdom. That nightmare scenario will only pop up in .1% of your games, or .2% if you're going second. That's so low it's not even worth noting. The lesson to pull from that is just how infrequently you'll see those horrible hands that make you want to pull a Weevil and throw your cards into the ocean. It's not worth factoring those rare scenarios into your decision making.

Seeing Hand Traps
Building off the last segment, the final bit of math I want to outline for you is a quick guide to the odds of seeing a single hand trap in your opening hand, specifically in your first five cards (because that's when those hand traps will be of use). Instead of citing specific examples, I'll just be highlighting the percentages based on a card by card basis: you know how many hand traps you run total, so just add them up and find the percentage that corresponds to the number you play.

Typically you'll probably run a combined total of five, six, or nine hand traps. But I'll also include seven and eight in there as well, to better demonstrate the power of diminishing returns; overloading your deck on defense isn't always optimal. Whenever you decide to run multiple cards that fill the same role, you hit a point where the benefits of playing more copies starts to become questionable, and it's at that point where additional copies may not be worth playing; they cost you deck space and they won't win you a significant increase in probability.

Interestingly, the numbers above can also be used for applications of cards like Salamangreat Gazelle. Since you play three copies each of Cynet Mining and Lady Debug, plus Salamangreat Circle and Gazelle itself, you can effectively play eight copies of Gazelle when you want to see it. That means you can open with it 69% of the time when you're going first. That showcases why playing multiples of highly searchable cards isn't always correct, and why engine cards tend to be preferred.

You can also use those numbers to expand your understanding of the chance to draw a Normal Summon in your opening hand. If you play five, you'll see a Normal Summon in just over half your hands. That can help you make decisions about the correct number of Normal Summons to play.

Bringing It Together
When you're building a deck that you plan to take to an event, it's important to use all of these numbers toward the goal of creating a more consistent strategy than your opponents. You want to make sure you can execute your game plan first, and then worry about cutting into your opponent's plans second.

That's it for me today everyone, until next time!