Welcome, everyone, to Lorehold 101. I'm Professor Prince, but you can call me Dr. Nick. To get one thing out of the way quickly: no, I'm not Professor Onyx, just your resident white aggro specialist. Ignore any rumors of the sort. I'd like to take our first day to give you all a preview, courtesy of Wizards of the Coast (whoever they are), of what we'll be learning this semester.

The Lorehold are committed to history, archaeology, and researching both through spells to speak to the dead and uncover lost artifacts and enchantments, leaving no stone unturned.

One of the best ways to learn about people from the past is to just ask them, no?

After all, studying the past is one of the best ways to predict the future. So what can we learn with this spell?

First, there is an emphasis on spells, specifically instants and sorceries, here at Strixhaven. While other environments will typically have a 3/2 white creature with some upside, at Strixhaven the same card is a Sorcery. With abilities like magecraft, there are plenty of reasons to prefer casting spells to summoning creatures.

Second, hybrid mana is a large part of Strixhaven. Flexibility in casting is important, and spells with minimal hybrid requirements are often excellent flex picks in Limited environments. Hybrid mana can also be used to make sure that powerful spells and creatures from one school are not desirable to another in Limited. Third, as a Lesson, Spirit Summoning can be taught to students quickly and easily. If a card would "teach," then you can either choose to discard a card, then draw a card, or go find a card from outside the game (usually your sideboard) and put the Lesson into your hand for a free card. In Limited, this is going to make drafting Lessons to pair with teachings important, effectively increasing the number of cards you play in your Draft deck. In Constructed, teach gives us an effective "wishboard" where we can go find the right tool for the game we're in, at the cost of some sideboard slots. I would be shocked if this mechanic didn't make a big splash in both Limited and Constructed. The ability to use sideboard cards mid-game, especially in game one, has a long history of winning games of Magic.

On its own, a 3/2 for three mana with no other upsides is just fine. They trade up decently well, and on curve help end the game quickly. This has multiple advantages over a Warpath Ghoul, and you'd be wise to remember this Lesson (it will be on the test later).

Next, we have a spell that will really teach you what knowing your history can do. While red and white mana are not generally known for their card advantage, the Lorehold understand its importance. Returning two cards from the graveyard is already more than these colors usually get, and Reconstructed History has the potential upside of being a five-for-one. In Limited, I'm a bit hesitant on this card. Artifacts and enchantments don't go to the graveyard very frequently, and most decks won't even have a planeswalker in them. In Standard and Commander, however, this card could be a powerhouse. As we saw with Showdown of the Skalds, giving a color combination that doesn't normally have card advantage a way to effectively draw extra cards is massive. That it works well with Showdown is a huge draw to the card—using it to rebuy Showdown and a couple other spells could bury an opponent.

Another home I'm considering for this card is a Mardu Yorion deck with Doom Foretold. These decks have existed off and on for months, but never quite seem to make it for very long. A way to recoup Doom Foretold, a planeswalker, and an artifact along with any other random instants and sorceries can be a quick way to swing the game back if you've fallen behind on cards. If you can ever draw all five, I assume the game will end shortly after. Of course, there are also ways for aggressive decks to use Reconstructed History, but we do have to get a bit more creative. I suspect there will be more ways to make token creatures with all five of these types in Strixhaven, as Spirit Summoning and Lorehold Command have demonstrated. The Theros Gods and Demigods are enchantments to be returned, and there are some artifact creatures worth getting back in Standard as well, such as Stonecoil Serpent. If there's an aggressive planeswalker or two in the format, Reconstructed History can represent a similar but different kind of top end to Showdown of the Skalds, allowing this theoretical deck to grind for much longer than most white-red decks do. And of course, it's possible it could also run Showdown as well.

Over in Commander, all these card types end up in the graveyard often, and white-red decks need more ways to draw cards and keep up with the card advantage of… well, honestly every other color combination. Most every deck in the format is already running instants, sorceries, and artifacts (in the form of mana rocks), and simply including Reconstructed History in most lists is trivial. Unfortunately with the exile clause there aren't many ways to recur this, making it a one-shot ability, but a welcome one. 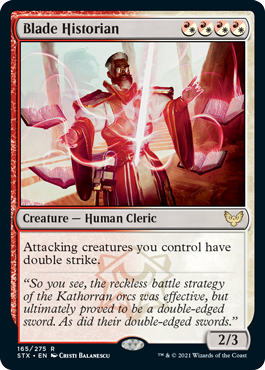 Finally, the Lorehold are not just classical scholars, or why would they bring me in?

The most obvious draw to Blade Historian is that center line of text: "Attacking creatures you control have double strike." Double strike is among the most powerful keywords in Magic, and giving it to even one creature is worth building entire decks around, as Embercleave has demonstrated. Dealing double damage ends the game almost instantly, it makes trading in combat frustrating, and it interacts incredibly well with trample and deathtouch. Giving all of your creatures double strike is fairly rare, especially for such a low cost. Of all the ways to give this ability that have been printed into Standard formats before, none of them have ever cost less than five mana, and most cost six or more. At four mana, there is the potential to create dream curves of playing a creature for the first three turns of the game, casting Blade Historian, and ending the game instantly. To demonstrate just how good this can be, we don't even need to go out of the way to play cards we aren't already interested in. Turn one Clarion Spirit, turn two Seasoned Hallowblade, turn three Skyclave Apparition, turn four Blade Historian is a lethal attack on turn four. So is Selfless Savior, Seasoned Hallowblade, Bonecrusher Giant, Blade Historian. Even if they're able to remove one of the other creatures, the influx of damage should still put them low enough that they're constantly at risk of losing the game.

This card's ability on its own feels like it should put people in "check" reliably, where they must remove it right away or concede. On top of that, white currently has two ways to protect a high-value creature in the form of Selfless Spirit and Alseid of Life's Bounty. I'm also interested in the casting cost of the card. Hybrid mana has a huge advantage built into it. Blade Historian can wrack up devotion for the Theros gods or other similar effects very fast. Specifically, Blade Historian curves perfectly after a Heliod, Sun-Crowned, hitting opponents like a wrecking ball. Heliod decks in Standard have run Arcanist's Owl before just because it single-handedly makes Heliod a creature. If there's any lifelink around, counters can be added after first strike damage to mess with combat even more. While this leaves us in a similar position as before (kill Blade Historian, or lose), it's another way to end the game on turn four with this creature.

Finally, while not likely, it could be relevant that Blade Historian is both a Human and a Cleric. Humans decks haven't done that well outside of Modern, but they do occasionally run an odd 4 mana value creature, and color requirements aren't tough for the deck. Cleric has some applications in Standard, such as triggering Righteous Valkyrie, and could be worth remembering with the D&D set coming out this summer.

With the semester starting soon, I don't want to keep you all too long. Bring your quills, read the syllabus, and remember: no board wipes in Lorehold 101.