Of all the player-created formats in Yu-Gi-Oh, none are more popular than goats.

The goat format's totally separate from the officially supported Advanced Format, and while you can't play it at official events you can still enjoy it with friends in unsanctioned settings. There are plenty of players who carry goat format decks on them whenever they're at a local, Regional, or YCS event, and right now you can easily find players looking for some goat format games via remote dueling.

Goat format offers a different kind of Yu-Gi-Oh experience that's akin to a time capsule: it's a static environment that imitates an ancient era of dueling. There's a few things you'll need to know when you consider building a goat format deck, and this week we'll discuss some of the basics you'll need to keep in mind. 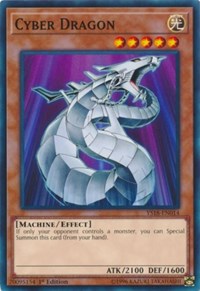 What Cards Are Playable In Goat Format?

Goat format chiefly focuses on a period of competitive play that ended in the fall of 2005.

It uses the April 2005 Forbidden & Limited List, and all cards released prior to Cybernetic Revolution are playable. There are a few potential exceptions – including some Collector Tin promos that were available early in a handful of regions – but for the most part, cards that debuted before August 2005 and weren't in a Collector's Tin are the most agreed-upon collection of cards available for goat format play. Goatformat.com has an excellent spreadsheet that you can download to quickly check whether a card is compatible or not, and some third-party dueling programs have a goat format setting that you can toggle.

These limitations produce some truly interesting builds, but why stop at Cybernetic Revolution specifically? There's more than one good answer to that question, but the best one is Cybernetic Revolution's most famous card: Cyber Dragon. Before 2005 a 2100 ATK monster that could freely Summon itself from the hand with easily-met conditions was unheard of, and its introduction completely changed the direction of the game.

Goat format represents the end of an era and the beginning of a much more combo-heavy style of play. That said, Yu-Gi-Oh still had plenty more transformations waiting for it in future sets, and the goat format wouldn't be the last 'end of an era' for the game. 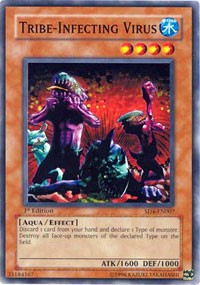 The Yu-Gi-Oh Rule Book looked a lot different in 2005, and goat format attempts to emulate that by turning the clock back on the many rule changes we've seen over the years.

Goat format fields have five monster zones, no Extra Monster Zones, a Fusion Deck instead of an Extra Deck, a Draw Phase for the player going first, and turn player priority for monsters' ignition effects. Most of those differences are pretty easy to understand, but if you're a new player you might not have any experience with priority for ignition effects. Luckily it's not too complicated, and it's basically just an extension of the priority that currently exists for the turn player for Spell Speed 2 and 3 card effects.

Basically, the turn player has the first opportunity to activate a Spell Speed 2 or higher effect whenever they make an action that doesn't start a chain, or doesn't change the phase (or step of a phase) in the duel.

For example: if you summon Tribe-Infecting Virus today you'll get the first opportunity to activate a Quick-Play Spell, trap, or a monster quick effect if that summon doesn't cause another effect to be activated. Assuming something like Black Garden isn't on the board, or Slifer the Sky Dragon, you'll be able to activate a set Torrential Tribute before your opponent can activate their card of choice.

In goat format you can even activate the effect of Tribe-Infecting Virus before your opponent can respond to the summon with Torrential Tribute or Bottomless Trap Hole. It's a hugely important part of goat format play, and it's one of the biggest reasons why cards like Tribe-Infecting Virus and Black Luster Soldier - Envoy of the Beginning were so popular despite so many counters existing at the time. 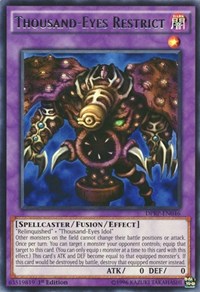 What Kind Of Decks Are Being Played?

Goat format is named after the period's top deck: Goat Control. That deck ran multiple copies of Scapegoat with Metamorphosis to summon Thousand-Eyes Restrict and leverage its monster removal and floodgate effects. Thousand-Eyes Restrict could absorb nearly any monster on the field by equipping it to itself, and also completely prevented the opponent's monsters from attacking. It was a fantastic monster in its own right, and utterly insane in an era where monster effect negation was scarce.

Goat Control decks further abused their power spells by recycling them with Magician of Faith, and both Sangan and Apprentice Magician could search it. Tsukuyomi let players 'reset' Thousand-Eyes Restrict by flipping it face-down and sending the equipped monster to the graveyard, which made it an important counter to Thousand-Eyes Restrict as well as a supporting combo piece.

Many of the format's tech choices were a response to Goat Control and its dominance in the game in early 2005. Nobleman of Crossout was a widely-played answer to set monsters, and generic monster removal was a must for dealing with Thousand-Eyes Restrict – a card that D.D. Warrior Lady and D.D. Assailant couldn't stop. Of course, Goat Control wasn't the only playable deck during this period. Zombie variants, FTKs featuring Royal Magical Library, Chaos-heavy builds, Monarch-based strategies, and even Horus the Black Flame Dragon LV8 are potential goat format decks. You can see some of these in action at Shonen Jump Championship events – the predecessor to today's Yu-Gi-Oh Championship Series – in old archived reports on the former Metagame.com website. For example, here are the Top 8 lists from SJC Los Angeles about two months before The Lost Millennium.

But what do goat format decks look like today? Goatformat.com's event coverage gives an excellent insight into what kinds of decks are being played and how successful those decks have been. In the example I just linked from May, Chaos-heavy builds represented most of the Top 8, and it's hard to overstate just how strong Chaos Sorcerer is in the format. Blade Knight saw play in 1st Place builds as a counter to Flip Effects, Abyss Soldier was played in the 2nd Place deck as an extra piece of monster removal, and the 4th Place build even ran two copies of Blowback Dragon for more firepower.

There are a lot of deck building decisions to make when putting together a goat format deck. These builds might look similar, but beyond a handful of staple cards there's plenty of room to try out different tech choices. You can play higher level cards that require tributes like Airknight Parshath, Blowback Dragon, or Jinzo, or prioritize cards that activate on destruction like Mystic Tomato, Shining Angel, or Apprentice Magician. Scapegoat and Metamorphosis, or Sakuretsu Armor and Solemn Judgment. Magical Merchant and Reasoning, or Trap Dustshoot and Mind Crush. There's plenty of variety despite the many staples you'll absolutely want to play. 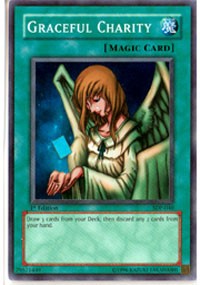 Playing goat format duels is a completely different experience from modern Yu-Gi-Oh, and that's probably obvious if you compare deck lists from the goat era to modern ones. There's a recurring theme of power spells and monsters being played in single copies, and decks that are built around leveraging card economy rather than a single explosive combo. The lack of search effects, themes, and quick effects gave duels a slower pace where draw power had significantly more impact on the outcome of the game.

The biggest differences between goat format and modern Yu-Gi-Oh are the impact of card economy and the reliance on the Normal Summon. Card economy's a subject that gets discussed pretty often as a new player, but in today's game the relevance of a +1 or +2 is almost always secondary to whether a card helps you continue a combo or solves an otherwise impossible-to-beat board. Yu-Gi-Oh today is riddled with many 'free' cards – largely a byproduct of the Dragon Ruler era. Countering that stream of free card economy is usually about setting up negation effects or deploying floodgates rather than out-resourcing yor opponent.

In goat format you're constantly waging a war of attrition. Wins don't come from locking down your opponent's effects, but by making beneficial exchanges and answering the threats they present. You can't win a goat control match on the first turn by flooding the board with negation effects, but you can lose it just as quickly if you don't build field presence. There are very few effects in goat format that allow monsters to Special Summon themselves, and those that can often don't have worthwhile effects. Most monsters in your goat format decks will be Normal Summons, and keeping them on the field while denying your opponent's Summons is a major part of the format's strategy.

That's not to say that goat format doesn't have its share of completely free card economy. Pre-errata Sinister Serpent is effectively unlimited discard fodder, and chaining together Pot of Greed, Graceful Charity, and Delinquent Duo can be just as devastating as any of today's combos. What's worse, there's no recourse for the player going second. There were no hand traps, and the player going first could draw a card on their first turn. The advantages to playing first were enormous, and falling behind in the duel early made comebacks difficult.

Goat format wasn't perfectly balanced – it was simply balanced in a way that some players preferred. There's clearly a demand for a format that takes Yu-Gi-Oh back to its fundamentals, and for now goat format appears to be the best venue.