I was never an early adopter of 90's toy crazes. I attended a private Christian school where pop culture reached us several months late, if at all. I had the Tamagotchi, Giga and Nano pets well past their culturally relevant expiration date.

I have no memory of Pokémon cards being a "thing" in my school (they were likely pre-banned because of the tendency to assume anything vaguely related to anime had some connection to the occult). My first time learning about Pokémon was reading a story in a children's current events magazine distributed through school, with this image seared in my memory: 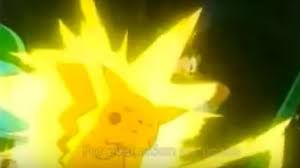 Apparently more than 600 kids watching the TV show in Japan in December of 1997 experienced seizures at an alarming rate from a flashing red and blue light from this scene (warning this WILL hurt your eyes).

Less than a year later, in September 1998, the Pokémon Red and Pokémon Blue Game Boy games and the Pokémon TV show reached the United States. Three months after that, Wizards of the Coast rolled out the Pokémon trading card game, setting the stage for Pokémon's popularity to reach a fever pitch in 1999.

The first news article I identified tracking the Pokémon card school bannings was by AP on April 15 of 1999.

"They seem to be the latest craze and the children are beginning to become obsessed by them," said Gerard Finelli, the principal at Colonial school. Finelli has banned trading between pupils "because some of our younger kids were getting suckered out of their more valuable cards." The cards are banned entirely at Prospect Hill school, where principal Richard Limato said,  "we were having instances in which the children were losing them and then getting very upset."

"The children were losing them." We'll come back to that phrase.

The next big cluster of news segments and articles around Pokémon card school bannings are from the beginning of the Fall of 1999 to Spring 2000 school year. Sept. 1999 to December 1999 seemed to be when Pokémon had permeated just about every U.S. state (or when school principals and teachers noticed how distracting they were). Populous states like NY, CA, NJ and Florida had clusters of news articles on the TCG and also a Missoula, Montana, newspaper reported that just about every elementary school in the area had banned the Pokémon cards.

So why were Pokémon cards banned in mass from elementary schools all over the U.S. in 1999? No other 90's toy fad seemed to catch the ire of principals and school districts as much as Pokémon cards. The latest toy fad trend piece was a recurring featured news bit in the 90's. Pogs, Beanie Babies, GameBoys, Furbys, and Yo Yos were all toys teachers had to deal with at some point, however the collectible nature of Pokémon cards raised unique issues.

Of the dozens of news articles I read, distraction and issues stemming from trades, buying and selling and theft of cards seemed to be the biggest concern for teachers trying to maintain order. Like Magic cards before them, Pokemon cards presented an unregulated economy thrust onto a demographic whose frontal lobes weren't even close to fully-developed. Pokemon cards offered a harrowing look into the obvious outcomes that arise when agents who aren't yet capable of thinking outside of themselves are given a currency to barter over and perceive value from.

Children weren't the only ones whose baser instincts were triggered by Pokemon cards—in more rare and alarming stories, the AP reported in Dec. 1999 there were stabbings, physical assaults, and robberies directly related to Pokémon cards.

There is no master list of every single elementary school that banned or restricted Pokémon cards from this era, however I identified at least 16 separate states mentioned in articles around elementary school card bannings.

When you talk to millennials who remember 1999, there is usually an air of injustice surrounding the bans. One of my peers even spearheaded a campaign to get the cards successfully reinstated at her school. A NY Daily News feel good story from 2011 featured a third-grader who was able to overturn the long-standing ban at his Queens charter school highlighting the addition, subtraction and multiplication skills learned from playing the TCG.

"I knew nothing about Pokémon," Assistant Principal Dr. Richard Welles said. "But I did some research and it confirmed what Lucas said. There's a great deal that's mathematical about it ... so I wrote to the staff saying that we can, under certain circumstances, promote it."

Some articles around bannings in 1999 featured more proactive principals and teachers who put restrictions on the trading and selling of the cards to avoid the inevitable tears, but encouraged their students to actually play the game during lunch or in special clubs.

On September 9, 1999, Chicago Tribune reporter Eric Zorn wrote about a teacher and principal who embraced the trading card game:

I'm now an admirer of the attitude of Carol Dudzik, principal of Lincoln Elementary in Oak Park, and Keith Pain, principal of Oster-Oakview School in New Lenox, both of whom are in the apparent minority of school officials who see benefits in Pokémon (about a third of the programs I called said they'd seen little evidence of the craze). "I've never seen anything like it," said Pain, who allows the cards on the playground yet prohibits trading. "It's constructive. The kids are doing some thinking and having positive interactions with each other. The game also gives kids who aren't good at soccer or football a chance to be good at something." "I find it so appealing," said Dudzik, who said her pupils are "big time" into Pokémon and gather in many little groups on the playground each day. "What's great is that the groups are mixed--cross-cultural, different ages, boys and girls," she said.

In this 1999 MSNBC news report, Psychiatrist Dr. Carole Lieberman is the voice of dissent, telling parents their children should avoid anything related to Pokémon because its central message is "violence." Dr. Lieberman is still paying the price for her unpopular opinion 20 years later; her healthgrades rating is a mere 1.8

Dr. Lieberman still practices medicine, self-branded as The Terrorist Therapist. Judging by her website, I'm not the only one who was confused by that choice:

Pokémon card school banning stories are still popping up, but were all in the United Kingdom pre Covid-19 pandemic in February. Teachers are still figuring out how to work with the popularity of the Pokémon TCG by creating lunchtime clubs where kids can learn how to play the game instead of making trades in the classroom and on the playground.

Looking back at all these news stories from 1999, one could have easily written off Pokémon as another weird Beanie Babies fad, but the Pokémon franchise and TCG has survived and thrived over the latest two decades as a main cultural staple. More than 20 years after Pokémon Gameboy games came to the U.S. it's grown to the highest grossing media franchise in the world. Why is this exactly? For one thing, it has managed to grow with its original audience and attract new generations of enthusiasts with Pokémon Go, the merchandise, video games, shows, etc.

And as the original trainers have grown up, they've introduced Pokémon to their own children and rediscovered the game themselves. This has resulted in a cross-generational experience shared by adults and children. As NPR reports, competitions in game stores can sport players aged 8 to 38. If it looks as though Pokémania has died out, that's only because we've acclimated ourselves to it. In truth, these Japanese pocket monsters have become as much a part of American life as cowboys, Superman, and Mickey Mouse.

I hope you enjoyed this little jaunt into the past and stick around for more Pokémon TCG cultural pieces on TCGplayer Infinite. Oh, and if you're feeling extra nostalgic, check out the original Pokémon TCG site that WOTC graciously has left up in all its 1999 glory for all us aging millennials.