When Wizards announced the new order of things not so long ago — two blocks a year and Standard Rotation every six months — it was met with quiet acceptance, if not enthusiasm. The change to the two-block structure was almost universally applauded, while the change to Standard Rotation was more mixed.

On one hand, more rotation means more decks. More brewing, more breakout weekends, more opportunities to play something different. For a format defined by change, this seemed like a home-run positive; no longer would Mono-Black Devotion dominate for too long under the new regime. For the most part, new Standard was successful in this. We got rid of Bant Company before we got too sick of it, even though it felt to many like it didn't come soon enough.

But it seems that not all was what it appeared.

There are growing pains with any change. We've seen that time and again in Magic, where announced changes by Wizards of the Coast take several iterations to get right. And, to Wizards' credit, they haven't been shy about adjusting policy to fit what players want.

Which brings us to today, and this bombshell. 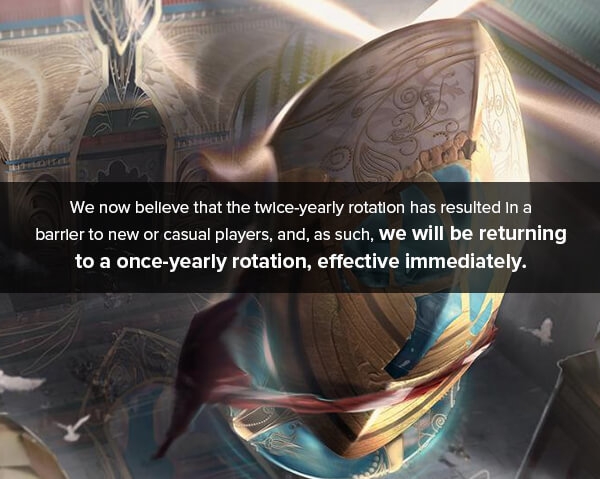 A little background: When I'm not editing for TCGplayer, doing coverage or being the work-from-home dad, I run the singles case at a large store. I'm actively involved in planning, running and judging Magic tournaments, and as a result have some insight into how these things affect us at the dealer level. My experiences in that capacity add to my takeaways here.

There's a lot to process with this announcement, so I want to try and cover as much as possible without delving too far into baseless speculation or prognosticating. Instead let's focus on the concrete changes we can expect from this.

This is NOT Old Standard

This is something I think will be lost in the change moving forward as people view this "new" structure as a return to the old. But for all the similarities, the reality is it is not. What we had before was one block a year, with a core set thrown in for good measure, along with rotation. What we're moving into is two blocks a year with no "off-set" in the form of a core set, and rotation was a year.

It's a key difference because of the way sets are designed. Dragons of Tarkir, for all its differences from the previous two sets, was still a continuation of what was laid out in Khans of Tarkir, just like Journey into Nyx was a continuation of the themes Theros laid out beforehand. While individual cards from those sets certainly had big impacts — Doomwake Giant and Den Protector say hi — they were still fundamentally the same concepts. New builds of strategies incorporated new cards and there were new decks in that regard, but constellation is still constellation, megamorph is still morph, and Siege Rhino decks are still Siege Rhino decks.

The two-block-a-year paradigm changes that. Even if rotation hadn't occurred, it's safe to say that Kaladesh would have spawned new archetypes in Standard, not simply added cards to previous decks. Vehicle decks are vehicle decks, and that wouldn't change even if Collected Company were still legal.

The takeaway here is that the new system is not like the old, despite the similarities. Two blocks a year is fundamentally different in the way it changes the metagame compared to one a year, regardless of the fact the number of sets is the same.

Decks Will Stick Around

Speaking of Collected Company, I am confident we would still be drowning in it if rotation hadn't kicked it out. Under the new system we'd still be looking at six more months of the format's best deck, something that brings with it both positives and negatives, and the possibility of more Siege Rhinos than ever before.

I know the first impression of this is all negative. After all, Collected Company was a menace on the metagame, and like Abzan and Mono-Black Devotion and Thragtusk and Jund and Faeries before it, people get tired of the best card and deck very quickly. Trust me, nothing is more exciting at my store than rotation day, where everything seems possible and some of it actually will be. New blocks — and rotation with them — drive interest from the player base, and a huge part of the Friday Night Magic crowd is people who would rather build their own deck than take one from the latest big Standard tournament. More rotation was great for those players.

But there is another side to it as well, one that I've had mentioned to me multiple times: "Standard just changes too fast; I can't keep up and justify the cost."

In affluent countries like the United States, Japan and most European countries, this is a minor annoyance to most players, and one worth the cost considering the benefits I outlined above. But it's important to remember here that Magic is a worldwide game, now more than ever. While most players in Western countries can stomach the cost of keeping up with Standard — even if they don't like it — players in other parts of the world aren't so lucky. TCGplayer isn't an option for everyone in the world, and in the small cities and game stores that make up a vital part of the Magic community worldwide, tracking down Standard cards can be much more of an ordeal. Lessening the window those cards will be useful for only exacerbates the problem.

That touches on the other aspect of this change, the financial one, and it comes with the good and the bad. While a major step was taken in regards to this with Kaladesh and the Masterpiece Series working to keep the cost of Standard down, Magic cards still cost money and are right now useful for less time than ever. Torrential Gearhulk is an awesome card. It's also $20 and the window to get use out of your $20 investment is shorter than ever. That's a real concern, and I've seen players step out of Standard because of it.

It's not that changing rotation is a Panacea, because while it can help in some aspects it also introduces another. Imagine if Dragons of Tarkir were still legal in Standard and a previously unplayed card like Hidden Dragonslayer were to suddenly take over Standard for whatever reason and be a 4-of all over. It may not seem like that long to us, but that set is nearly two years old, and that is a recipe for extremely expensive cards. Even worse is that the card would be rotating in just a few months, so the inevitable price jump — helped along by how long it's been since the printing — would be pronounced but short-lived. That's not good for bringing players into your flagship format. Yes, this is a problem that exists wherever you drop the rotation flag, but it becomes more pronounced the older the card is. I'm hopeful that the "Masterpiece Effect" will help to alleviate these issues in the future.

It Could Cannibalize the Newest Set

It's no secret that the primary goal of Wizards of the Coast is to sell Magic cards, and given the way the market works that means selling packs from the newest set. Nothing else happens in Magic if this goal is not met year after year. It's neither a good nor a bad thing, it's just the reality of the game.

In this sense, the 18-month Standard Rotation seemed like a boon for Wizards. After all, the smaller the card pool is, the more chance of new cards making a major splash. You better believe that Wizards is happy when new cards do well at events, and seeing Aetherworks Marvel Top 8 Pro Tour Kaladesh but not dominate is exactly the balance they want to strike.

Lengthening the Standard season actively damages this goal, which seems contrary to the ideal world Wizards of the Coast wants to live in. Which leads me to my final and most important point.

Wizards Has a Good Reason for This

There is one thing Wizards cares about more than any other. More than breakout cards, narrative storylines or optimal lengths of Standard seasons.

They care about players playing the game.

We've seen exactly two bannings in the history of the Standard metagame. Affinity met bannings during the Mirrodin era, and CawBlade decks ran into the banhammer during Zendikar block.

Why? They certainly weren't the only decks to dominate during their time in Standard; I ran through a long list of dominant decks above that generated nearly as much dominance. But there's a key difference that makes Affinity and Jace-Stoneforge different than any other time in Magic.

Collected Company was annoying, but players still played Magic. Everyone loved to hate on Siege Rhino and Pack Rat (with good reason), but people still showed up in droves to FNM. Neither of those merited immediate changes.

And yet the 18-month Rotation cycle did, less than a year into its implementation. That's an incredibly short timeframe to judge success by, but here we are. No, I don't know Magic's year-over-year tournament attendance (profits grew in Q3 2016), but I do know that Wizards — an incredibly conservative company when it comes to the bottom line — felt comfortable pulling the trigger on this change based on "player feedback."

That speaks louder than any announcement article ever could. When analyzing decisions by Wizards, always remember that they have access to worlds more information than we ever will, and that's what decisions get based on, not Twitter or Reddit feedback. If they're pulling the plug on 18-month rotation this quickly, it means they had good reason to do so.

What exactly that means for us moving forward, we won't know the full details for some time. What I do know is that you can expect an additional six months of Smuggler's Copter.