Jet Synchron and Mecha Phantom Beast O-Lion are now Forbidden along with Block Dragon, but Crystron Halqifibrax is still legal; you can still summon it and do some crazy combos. Those plays aren't as easy as they used to be, but they exist and they're going to be relevant enough that you should watch out for them.

If you're building a new deck and looking for ideas, Crystron Halqifibrax could be the way to start. It's still one of the most powerful search cards in the game, able to summon any Level 3 or lower tuner directly from the deck so you can Link climb or unleash powerful Synchro combos. Crystron Halqifibrax can search out almost 300 cards, many of which are extremely viable, so of course everyone wants to use it. But what are the best options in the new format?

Today I'll cover a lot of the popular cards people often use to summon Crystron Halqifibrax in case you need to get up to speed, plays that are still legal under the latest banlist. I'll also show you some cool combos I've found that haven't become popular yet, geared toward the new format.

The best options are 1-card summons that instantly get you two bodies on the field, at least one being a tuner. Here's a list of the top picks.

You definitely need to consider the Dino matchup moving forward because it's so consistent; there are plenty of ways to search out the combo pieces. 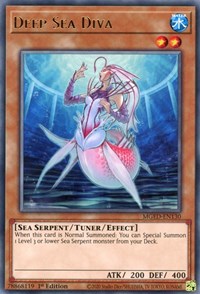 Deep Sea Diva one of the best options available, because if it resolves, you can bring out Neptabyss, the Atlantean Prince and eventually get to Deep Sea Minstrel. That lets you snipe Nibiru, the Primal Being from your opponnent's hand before you summon Crystron Halqifibrax.

Deskbot 003 can search and Special Summon Deskbot 001. That's an instant Crystron Halqifibrax as well as a Herald of the Arc Light. If you use Crystron Halqifibrax to bring out a second Deskbot 001, you can do some crazy combos with Mecha Phantom Beast Auroradon and extend your plays even more with Mecha Phantom Beast Coltwing. There's lots of potential to abuse Herald of the Arc Light search power.

Girsu, the Orcust Mekk-Knight can also be a 1-card Crystron Halqifibrax. Just keep in mind that it's only a tuner if it was summoned in a zone with two other cards, so it's not exactly a 1-card combo in some perspectives. That said, your opponent definitely has to stop it when you summon it going second, since it can summon a token to combo with as well as loading an Orcust monster to the graveyard for follow-ups. 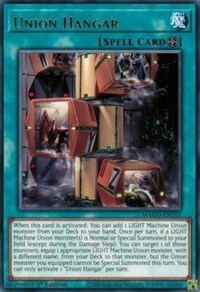 The Field Spell Union Hangar can also be a 1-card Crystron Halqifibrax. Being able to equip Union Driver from the deck, you can use Union Driver to equip Torque Tune Gear. You can then Special Summon it and thus have a tuner and another monster on the field. With ABC-Dragon Buster finally back to two-per-deck, there will definitely be more ABC players in tournaments this format. 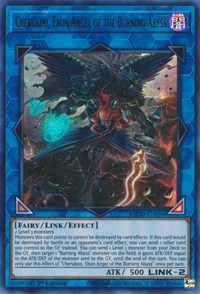 There are plenty of other monsters that can be 1-card Crystron Halqifibrax plays, but these are the most efficient, and the most rewarding. Cards like Lefty Driver and Righty Driver, Sublimation Knight with its partner Squeaknight, Sangan into Salamangreat Almiraj to search and summon Crusadia Arboria, and D/D Savant Kepler with the Dark Contract and D/D Lamia are all pretty decent.

Halqifibrax But With Extra Steps

But that's not all, there are also combos that don't summon Crystron Halqifibrax right away, just like the Tour Guide from the Underworld combo. I want to highlight them because they summon out other powerful Link Monsters that give you free cards, relevant because of Linkross and Martial Metal Marcher. These plays are quite powerful, and they're good at setting up a Herald of the Arc Light before you get to Crystron Halqifibrax.

Chaos Space into Black Dragon Collapserpent and White Dragon Wyverburster, or any of the 1-card Dragon Link combos – there's just too many to list! – is super ridiculously powerful.

I personally try to splash Chaos Space with the Level 4 Chaos dragons into any Light or Dark deck because there's a combo to summon Crystron Halqifibrax without Normal Summoning, and they're just such great extenders on top of that. You really want to summon Dragunity Knight - Romulus. Then you can search out the Equip Spell Dragunity Divine Lance, letting you search, attach and summon Dragunity Phalanx to the field. That's a Crystron Halqifibrax right there. 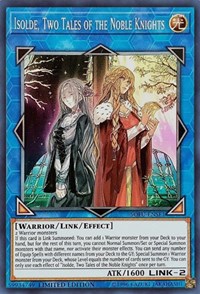 It's especially powerful with the Neo Space Connector package because it's just like the Deep Sea Diva play, where you can disrupt your opponent's hand before you go into your Links. 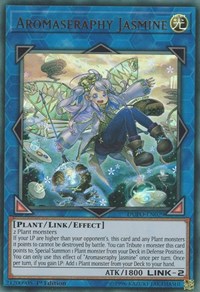 Once you have the combo pieces to summon Crystron Halqifibrax you're ready for the ever-popular Linkross. You'll turn your Link 2 monster into Linkross to spawn two tokens, and from there, your line of play depends on the level of your tuner. 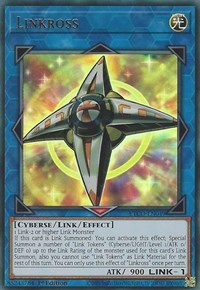 Tune the token with Martial Metal Marcher to summon Herald of the Arc Light. Now you can safely summon Crystron Halqifibrax with the Linkross and the Level 2 tuner while you're protected by Herald's negation. Or you can even just end the combo with Predaplant Verte Anaconda into Red-Eyes Dark Dragoon. Up to you.

If your tuner's Level 1 instead, you can summon Formula Synchron to get a free draw. Then summon Martial Metal Marcher to revive back either the Level 1 or the Formula Synchron. From there, summon Crystron Halqifibrax and continue your combo, or go into Mecha Phantom Beast Auroradon by turning two of the monsters (including the Linkross) into a Barricadeborg Blocker.

Those are the most popular generic combos.

What To Summon Off Halqifibrax? And Which Combos?!

So now that Jet Synchron and Mecha Phantom Beast O-Lion are banned, what should you summon off of Crystron Halqifibrax?

I've mentioned it before, but you can bring out Deskbot 001 for some pretty cool combos with Mecha Phantom Beast Auroradon and Mecha Phantom Beast Coltwing. Those combos saw limited play even before this new format, but they weren't too popular because they require a lot of other cards in the deck. 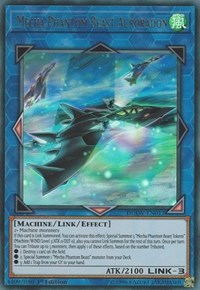 People are hyping up Plaguespreader Zombie now more than ever since it's not only a 1-card Crystron Halqifibrax with Salamangreat Almiraj, but also its use as an extender. Since its graveyard effect isn't limited to once per turn, the ceiling for its performance is instead determined by how many cards you have in your hand. It's even funnier if your opponent uses Artifact Lancea, in which case you'll get free Link climbing material via Plaguespreader Zombie.

Orcust Brass Bombard is exclusive to Orcust decks but it makes a great extender in case things fall through. It lets you summon out an Orcust from your hand later in the combo. And since both Plaguespreader Zombie and Orcust Brass Bombard are Dark monsters, you can make a Barricadeborg Blocker with the Crystron Halqifibrax and an extender to gather the materials for The Phantom Knights of Rusty Bardiche.

Lately I've been testing with Scrap Tuners, like Scrap Goblin, Scrap Worm and Scrap Mind Reader. Their Levels aren't too important but they let you go into Scrap Wyvern to bring out Scrap Golem and extend your plays. I personally do the Linkross combo after I resolve Crystron Halqifibrax so I can get the most value out of the play.

Having access to the Scrap Wyvern combo also means you can easily make a Link 4 like Apollousa, Bow of the Goddess or even Curious, the Lightsworn Dominion since you'll have Scrap Wyvern (a Link 2 Earth Dragon) and Scrap Golem (and Earth attribute Rock) along with the Scrap Tuner you've chosen. With the power of Curious, the Lightsworn Dominion you can send any card from your deck to the grave and even mill three afterwards to keep your plays going.

I think these Scrap cards are definitely worth picking up before they become more popular. 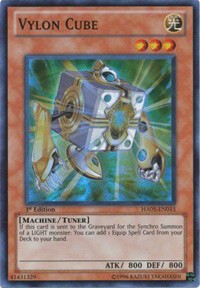 If you really want you can probably play Unchained Abomination in other decks to destroy your own Smoke Grenade of the Thief and trigger the effect. And with enough extenders you can do the Union Carrier Dragon Buster Destruction Sword lock with it. That could be a cool idea. 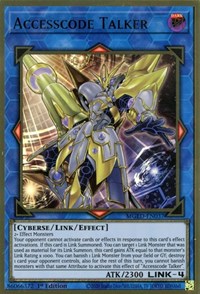 Another classic combo that still exists in the new format sees you summoning a Spellcaster tuner off Crystron Halqifibrax. People usually play Effect Veiler because it's also useful as a hand trap, and it lets you climb into Selene, Queen of the Master Magicians. Continuing the combo requires you to have Spell Counters on Selene, but all you need is at least three spells in either player's graveyard, or face-up on the field.

That'll give you three counters for Selene's effect, so you can to revive your Spellcaster tuner and Link Summon once more into Accesscode Talker. It'll hit the field with 5300 AATK and at least two destruction effects, helping deal damage and finish games.

Once again, we're in a similar environment as last format; you still have to play hand traps so you can stop your opponent from resolving a Crystron Halqifibrax combo. It's even more scary now, since even if you do negate their Crystron Halqifibrax, your opponent could still be playing Predaplant Verte Anaconda with Red-Eyes Fusion just to bring out Red-Eyes Dark Dragoon. This all means that combo decks will consistently force the player going second to have two cards that can interact, or risk facing a big set-up that just can't be stopped.

Not to mention that Numeron cards are still legal, turboing out Number S0: Utopic Zexal with ease.