I haven't been to a local event since Duel Overload came out, and last week Konami released a statement that all Organized Play and events are postponed indefinitely until further notice. That means that for at least a few more weeks, instead of playing Yu-Gi-Oh at a local card shop, you just gotta play it with friends on your kitchen table. Or your living room coffee table. Or even on the floor.

Of course, you could play the best and most viable decks of the format to uhhhh… "practice"? Or you could be like me and explore some serious jank instead; the kind of decks that are funny when they work, especially against your friends.

I was thinking about Chaos Space a little while ago while I was surfing through the endless sea of social media, and it occurred to me that Chaos Space can also search for Ritual Monsters, because they fill the card's qualification of monsters that "cannot be normal summoned or set." So what Light or Dark Ritual deck's the most viable in combination with Chaos Space? Probably the one with negation effects and the power to search any Fairy-type monster that

That means Herald of Perfection and Cyber Angel Benten. 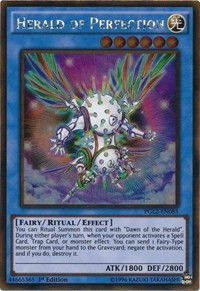 Chaos Space costs you a card to play, and the Ritual engine doesn't inherently banish anything; you'll have to do a little footwork to draw the extra card off of Chaos Space. But like Ritual Sanctuary I think two copies of Chaos Space is still viable; the two cards work well together since they're both hard once-per-turn effects.

Besides searching for those Light Fairies, Chaos Space can also fetch Impcantation Chalislime, which in turn searches for the non-Ritual Impcantations. They can search for any Ritual Spell or Ritual Monster. It's actually really amazing; there's so much Ritual support that almost every card in the deck can search for your key combo.

Sitting on a Herald of Perfection with two negates is ok, but it won't win you the game outright. And even though Cyber Angel Benten can search for the likes of The Agent of Creation - Venus, Star Seraph Scepter, Manju of the Ten Thousand Hands and so on, I'd rather search for something like Vanity's Ruler to just win the game instantly.

You could play Archlord Kristya instead, but I think Vanity's Ruler helps you progress your own position far more. Follow-up moves like Special Summoning more Impcantations on the following turn to get more Fairies back your hand for Herald of Perfection negates can be incredibly valuable, and you can't do that if Archlord Kristya's locking down your Special Summons too.

And this is where you'll see even more synergy. The Impcantations don't let you use your Extra Deck while they're on the field, and you usually need to use them to search for the Cyber Angel Benten combo. So searching for The Agent of Creation - Venus or Star Seraph Scepter would be somewhat counter-productive, as those Impcantations are still on the board. It's much easier to use them to Tribute Summon Vanity's Ruler! After that, you just keep poking at your opponent one turn at a time, gathering more and more Fairies in your hand for Herald of Perfection.

And that's the deck's concept. It's VERY simple: search for a way to Ritual Summon Herald of Perfection, search for Vanity's Ruler, and if you've got two Impcantations on board just Tribute Summon it. That combination of Ruler's floodgate effect and Herald of Perfection mass negation is often an instant win. Ask your opponent if they have Dark Ruler No More, and if they don't then they've probably lost.

Dawn of the Herald

Just a reminder: this is only a deck concept. When I was testing it I found that I didn't necessarily need an Extra Deck unless I really wanted an Elder Entity N'tss to send to the graveyard with Extra-Foolish Burial when I'm going second. Or you could be playing Pot of Extravagance. There's probably some room for improvement, but you'll be surprised to see how consistent this deck already is if you give it a try.

Honest was probably the only remaining Fairy I found that I'd want to search, because even if you don't summon Vanity's Ruler, you still want something that could help you win with an 1800 ATK Herald of Perfection. It's also very nice that Ritual Sanctuary can let you revive and reuse Honest by recycling spell cards.

I chose to play Sacred Sword of Seven Stars and Allure of Darkness because not only is drawing two cards really good, I wanted to get the additional draw with Chaos Space by recycling Impcantation Chalislime. My list plays 6 Dark monsters with multiple ways to search for the Impcantation Chalislime, so it's actually pretty consistent.

After that I max out on Herald of Perfection, Dawn of the Herald and Cyber Angel Benten, with 5 filler draw cards in Upstart Goblin, Sacred Sword of Seven Stars, and triple Allure of Darkness. Vanity's Ruler, Honest and Impcantation Inception round things out, all searchable cards you'd rather avoid drawing. Though you don't want to draw the Impcantation Inception, it does combo with Impcantation Chalislime and you can discard it with Ritual Sanctuary, so I guess it could sort of be considered the 28th search card.

That's the deck. Like I've said, it's very simple and there's only one real Normal Summon.

In my playtesting I tried to incorporate cards like Monster Gate and Reasoning because the Impcantations get their on-summon effects as long as you Special Summon them from the deck. So after sending Ritual Monsters and spells to the graveyard, even Impcantation Bookstone and Impcantation Penciplume could also have gotten you a card. If you played Archlord Kristya instead of Vanity's Ruler, the Monster Gate and Reasoning could also Special Summon it.

I experimented with some going-second Fairy monsters to help break boards, too. Timelord monsters would probably be the best cards to search with Cyber Angel Benten, but usually you would have Herald of Perfection on board to get the Cyber Angel Benten search anyways, which means you'd have to rely on Tribute Summoning with the Impcantations.

After I created this list I realized just how affordable all the cards were, especially because this version doesn't play Pot of Extravagance. Even if you have to buy everything and build it all from the ground up, the whole deck can be had for as little as 60 dollars give or take shipping.

There's not really much else to say. The strategy's very linear and very consistent, which is what I wanted to build. Though being flashy and wombo comboing with stuff like The Agent of Creation - Venus and Star Seraphs is fun, all of those options come with risks. Tribute Summoning a card that stops your opponent from playing the game while having a card that negates almost anything is pretty funny and carries a very low chance of failure. Why does this combo exist? And why is it so easy to do? It's so good!

I hope you guys have fun with this quick list I made. Maybe the next time you hang out with your friends you can whip this deck out and bully them with it a bit. Just don't play this against your friends too much, as the strategy's pretty oppressive and may prove discouraging.

Wait! This article didn't mention True King of All Calamities! Oh no, I broke my pattern! See ya next time.