Alternate artworks are a staple in trading card games, and Yu-Gi-Oh is no exception. There are over 10,000 cards in Yu-Gi-Oh with unique artwork, but every so often, the game's most popular cards receive a little extra love. Classics like Blue-Eyes White Dragon and Dark Magician have more artworks than most cards have reprints, and recently there's been a major shift in how alternate artworks are distributed. Alt art cards in non-promo sets used to be exclusive to the game's most famous cards. Today, we're seeing more and more alternate artworks in mainline products like Starter Decks and reprint sets like Maximum Gold.

This week we're taking a look at the legacy of Yu-Gi-Oh's alternate artworks, starting from the game's earliest releases and continuing through the upcoming product-hover id="246446".

Alternate artworks in the Yugioh TCG actually began with Legend of Blue Eyes White Dragon. Monster Reborn was printed with an alternate art for its international release, in the very first core booster pack in Yu-Gi-Oh history. 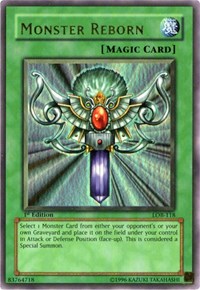 Plenty of other cards early in the game's life had drastically different artworks when they made their international debut, including Ultimate Offering. You could argue that these cards don't qualify as alternate artworks since their original artwork didn't exist in the TCG, but I think it's worth pointing out that cards with multiple artworks existed in some form from the game's inception. Many of these cards weren't just lightly edited for their international release — they were radically changed, with entirely new art.

The first true alternate artwork in the TCG was, of course, Blue-Eyes White Dragon. 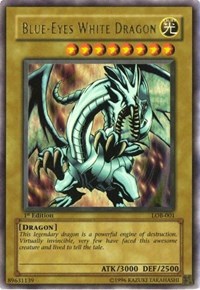 It debuted in Legend of Blue Eyes White Dragon as the game's premiere boss monster, and was reprinted after only a few weeks in Starter Deck: Kaiba with an artwork that more closely matched its anime and manga appearance. Personally I'd assumed that the Starter Deck: Kaiba printing was actually the original, and years ago I was surprised to learn that the LOB Ultra Rare featured the same artwork as the Starter Deck: Kaiba Evolution version. The Starter Deck: Kaiba Blue-Eye was the first Yu-Gi-Oh card I'd ever owned. As a result, that's still the 'original' artwork in my mind, despite the LOB printing technically coming first in the TCG.

Another classic monster made the same jump from LOB to a Starter Deck, and it also came with a new artwork. As you've probably guessed, Dark Magician was reprinted shortly after LOB in Starter Deck: Yugi, again with anime-accurate artwork. 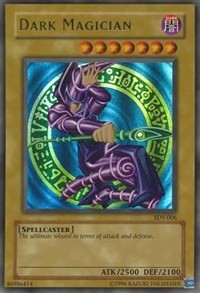 Interestingly, Red-Eyes Black Dragon didn't make the jump with a new artwork in Starter Deck: Joey. Its LOB printing and Starter Deck artwork are identical — both cards even have the same rarity. Of course, Red-Eyes would get its own fair share of alternate artworks, although still not nearly as many as Dark Magician and Blue-Eyes.

Special Edition Artworks Through The Years

The Anniversary Pack is a famous collection of alternate artworks of classic Yu-Gi-Oh cards — and one new monster — as drawn by Yu-Gi-Oh manga creator Kazuki Takahashi. These unique artworks haven't been featured since, which makes them incredible collector's items even if they're not extremely valuable. Blue-Eyes White Dragon is the most expensive card in the set, and for good reason: you're just not going to find that artwork anywhere else.

Kazuki Takahashi also personally created a set of alternate artworks for the initial debut of the playable Egyptian God monsters. Obelisk the Tormentor, Slifer the Sky Dragon, and The Winged Dragon of Ra made their first playable appearance in the TCG as Shonen Jump promos featuring art that was very different from their anime appearance — in a good way! These cards have since been reprinted with their Shonen Jump art in a handful of different sets, including Battle Pack: Epic Dawn and Gold Series 4: Pyramids Edition.

The Lost Art Promotion is like a backwards alternate art release schedule. Rather than releasing the original art and following it with a variant, Konami released literally hundreds of cards with variant art for their international release. These cards are finally receiving 'alternate art' printings that are really just imports of the original artworks.

It's a weird situation that might not 'technically' fit here, but as I mentioned earlier some of these cards are significantly different from their original printing! product-hover id="215605" is recognizable at a glance, but what about product-hover id="216501"? They both look like alternate artworks, even if their OCG artwork was actually the original.

Over the years, alternate artworks have found their way out of special edition sets and into more core products. Structure Deck: Spirit Charmers and Structure Deck: Shaddoll Showdown featured reprints of Charmer and El Shaddoll monsters respectively, bringing players brand-new artwork in a Structure Deck format for the first time in years. Yu-Gi-Oh set a trend of debuting new artwork in Starter Decks at the beginning of the game and only began following through recently. It's an exciting trend that could mean even more alt arts in future Structure Decks, especially ones that are updating older themes.

2019 and 2020 introduced over a dozen alternate artworks between Duel Power, Duel Devastator, Duel Overload, Maximum Gold, and the Lost Art promotion. Duel Power dropped a handful of alternate artworks — one for each series protagonist in the anime — including cards like Stardust Dragon, Odd-Eyes Pendulum Dragon, and Decode Talker.

Last year's Maximum Gold reprinted a handful of cards that had already received alternate arts in Duel Devastator and Duel Overload, but it also introduced new artwork for Fantastical Dragon Phantazmay, Borrelsword Dragon, and Apollousa, Bow of the Goddess.

There's a surprising lack of alternate artworks for some of the game's most popular cards. Kuriboh only has two in the TCG, despite its near-mascot status, and Exodia the Forbidden One has just one artwork if you exclude its Lost Art printing. Red-Eyes Black Dragon hasn't had any new artwork since 2008. Yu-Gi-Oh's process of introducing the same art with a new rarity keeps players buying their favorite cards without relying on artists to produce new work for existing cards, but that might be changing now that more tournament cards are receiving new artwork.

Combining new rarity offerings with new artwork was successful in last year's Maximum Gold, and there's no reason to believe it won't work again this year. It's an opportunity for collectors to get their hands on new rarities and alternate art cards in one place, and there's even demand among players who already own the original artworks. It's impossible to know when these artworks are returning, and if Maximum Gold is any indication these cards will likely rise steadily in price over the next year.

There's a lot of value in unique rarity/artwork combinations. Outside of a mass reprint set in the future, it's unlikely that any of these cards will be returning anytime soon. Luckily, product-hover id="246446" a fantastic set that's worth investing in for its reprints alone.