Most themes these days have long-winded combos, big win conditions and even a bevy of boss monsters… but not ABCs. In a game that feels like it gets more and more complicated every month, the ABC deck's simplicity is actually a tremendous strength. All you want to do is banish three specific monsters to summon ABC-Dragon Buster… and…well, that's about it.

Kelly Locke featured a World Legacy Deck just this week, and it's a great example of how expansive one theme can be. Zachariah Butler showed us a Salamangreat Deck last week too, packed with flashy theme-stamped combos. But ABCs are something entirely unique these days, for both what they are and what they aren't.

And what I can tell you right now is that contrary to popular belief, ABCs aren't dead. Not by a long shot.

Union Hangar Is Its Own Combo
Thanks to a few new card releases, Union Hangar's a self-contained combo that nets you some insane results. Obviously the recursion and search power of the ABC cards is nice, and really helps you out in grind games, but I believe ABC is still a viable deck just based on the sheer power level of some of its individual cards.

Depending on what you have in your hand, Union Hangar can create certain boards with varying levels of ease, but to start I want to focus on using just Union Hangar. If one card can be so powerful and consistent, adding a supporting cast only proves tha the deck can be a contender.

-Banish Union Driver to equip C-Crush Wyvern to B-Buster Drake, then Special Summon it right away

-Link Summon into Barricadeborg Blocker, triggering B-Buster Drake and C-Crush Wyvern to search and Special Summon A-Assault Core. (You'll need another Union monster in hand to activate C-Crush Wyvern's effect in this case, but that extra card isn't used in the play so I'm still calling it a 1-card combo)

You'll finish this base combo with Mecha Phantom Beast O-Lion and Tokens, opening up tons of possibilities. Some combos require you to get back a Union monster with A-Assault Core, but at the bare minimum, you've placed all the pieces you need for ABC-Dragon Buster locked and loaded in your graveyard! 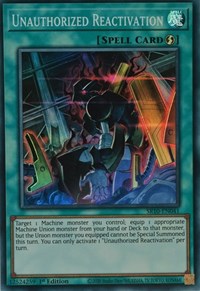 -Banish Union Driver to attach C-Crush Wyvern, then Special Summon it and follow the same steps from the first combo

Given that you play B-Buster Drake and C-Crush Wyvern in triplicates, it's mostly a matter of drawing Unauthorized Reactivation to gett the same results as Union Hangar. You can call it a 1.5-card combo if you want to get cute about it. But yeah, turns out, there's another way to get the same results outside of the core ABC cards on their own.

Yes, Scrap Recycler's The Combo Too
Scrap Recycler continues to be played everywhere. While it's not as self-contained as Union Hangar, the combo requirements devolve to just Scrap Recycler plus another card on the field. Let's say you open with Scrap Recycler and Upstart Goblin.

The difference with this combo is an extra Mecha Phantom Beast Token on the field and C-Crush Wyvern in your hand, but you've effectively arrived at the same setup as the other combos. Keep in mind in the first two, A-Assault Core can add back C-Crush Wyvern, which will be important later.

While Union Hangar, Unauthorized Reactivation and Scrap Recycler aren't congruent on all fronts, it's proof ABC decks don't 100% live and die by Union Hangar. It's nice to have everything neatly packaged into one Field Spell, sure, but now over a quarter of your deck is suddenly a good starter card. Check out the deck list before we get into any crazy combos.

That first combo's simple but powerful, in all of its iterations. All of the following combos pick up at the end of that one, with Mecha Phantom Beast O-Lion and two Mecha Phantom Beast Tokens on board. First up, you can play for Borreload Savage Dragon with ease.

It's not rocket science, but it's evidence that without many ancillary cards, you can set yourself up with at least two answers to your opponent's plays.

-Send Jet Synchron to the graveyard with Accel Synchron to make it a Level 4 Tuner, then Synchro Summon F.A. Dawn Dragster with a Mecha Phantom Beast Token

It's a tad different from the first combo but only requires one extra card in each of the Main and Extra Decks. If you're expecting to play against a spell and trap heavy strategy or anything that needs to send cards from the hand or deck to the graveyard, this combo's even better than Borreload Savage Dragon.

Having the ABC-Dragon Buster's a nice treat, too. After all, that is the deck's namesake.

Borreload Savage Dragon + Herald of the Arc Light? Check
Surprise, it's not totally an either/or situation! You can have the best of both worlds, but it takes a little more investment after you've summoned the two Mecha Phantom Beast Tokens and Mecha Phantom Beast O-Lion.

-Discard the C-Crush Wyvern you added back or just searched, to summon Jet Synchron

This is probably one of the better boards because you finish with a generic negation, a spell or trap negation, you banish cards that are supposed to be in the graveyard, and you've go a way to shoot down a card from your opponent. You don't have to make a crazy investment into the deck, but Karakuri Gama MDL 4624 "Shirokunishi" isn't something you want to draw.

Calamities + Herald of the Arc Light? Check
While all the above combos came from just a Union Hangar, I'll give you a slightly bigger headache and add one more card that gives you more things to do: Deep-Space Cruiser IX. Pitch a card, summon a Level 9 monster. Easy enough, right?

-Send Jet Synchron to the graveyard with Accel Synchron to make it a Level 6 Tuner, then Synchro Summon Ravenous Crocodragon Archethys, drawing a card

-Discard the C-Crush Wyvern, however you got it, to summon Jet Synchron 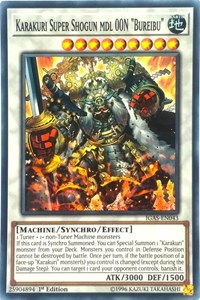 Limitless Options? Check
Without being hyperbolic, I'm not even described literally dozens of combos that are just as good; you're only really limited by deck size and cards you're hoping not to draw. If you included every good option here, the deck would be about half full of situational cards that you'd hate to actually see in your hand. But there's a lot of possibilities out there.

For example, consider the Level 9 Karakuri Super Shogun mdl 00N "Bureibu". Adding that and Karakuri Watchdog mdl 313 "Saizan" changes the last combo into True King of All Calamities and Abyss Dweller with the same investments, but now you're seeing the problem I ran into. It's really hard to say what the "meta" is without any actual competitive play going on, so judgment calls like "is Abyss Dweller worth it" are tough to make.

Each of the combo permutations I described are great against specific decks, and I believe you can counter just about any strategy if you tailor your list just right. That said, it's important to cover as many matchups as possible. Adding Infinite Impermanence, Ash Blossom & Joyous Spring, and Called by the Grave covers a lot of ground whether you're forced to go first or second.

Don't sleep on ABCs. Sure, they'll have to adapt to stay relevant in competition, but thanks to some of the ridiculous combos we just discussed I'm excited to keep my build up to date as metagames evolve!