When it comes to pure power level, Aether Revolt is a set full of cards that are weak in Limited. These types of formats are often frustrating yet interesting since it's up to you to draft a deck that maximizes how well your cards work together – that means the most important aspect of this format is to draft for synergy. While this may be in your best interest in any Limited format, in Aether Revolt in particular it's mandatory to get enough utility and strength from your cards and deck beyond just selecting the best card out of every pack.

Aether Revolt has an abundance of powerful removal spells at each rarity. This can strain your ability to draft synergistic decks, but it's still advisable to go for removal first and foremost. Very often you will be taking removal early to establish your colors and ensure your ability to deal with threats and put pressure on your opponent when you happen to be ahead. It's important to evaluate removal on the fly, as deeper into the draft it may be more important to take cards that fit your deck.

This primer is more of a general outline on the format. If you are looking for a specific pick order or even if you're not, I highly recommend checking out Frank Karsten's article as I agree with most of his evaluations which can be a helpful for early in-draft decisions. This is a good baseline for knowing which cards are "good enough" to take over premium removal.

In most artifact-themed blocks you typically see a plethora of artifacts that are powerful enough to be played in any deck. Uniquely, it seems that Wizards designed the artifacts in Aether Revolt to not be used in this manner. A large portion require colored mana, such as the Implements and the Automaton cycles. Beyond that, the artifacts revolve around vehicles, energy or improvise that are best used in one color.

Because of this, cutting a color is an effective way to set up a good pack two for Aether Revolt mechanics since many of the artifacts essentially have color identities. For instance, you can possibly force an archetype like Grixis Improvise since the improvise payoff cards can be found in early pack one or throughout pack two. On the other hand, in the third pack being in an open color combination sets you up to get the best cards out of the pack. A color combination like Red-Green Energy Aggro is going to be most effective while drafting it while it seems open, as opposed to forcing it since the best cards for the archetype are all from the Kaladesh pack.

There are several pillars that I see in the best draft decks of this format:

To get the most out of your draft, prioritize being quick and drafting cards that work well together. While many of the strong decks of the format are aggressive, don't confuse drafting for quickness with drafting for the most aggressive deck. Quickness is a word I'm going to use to describe combining a low-to-the-ground, efficient curve with cards that work well together. In Aether Revolt, synergy and swiftness go hand in hand, and utilizing them in tandem leads to many snowballing victories. A look at the mechanics demonstrates the prevalence of this principle 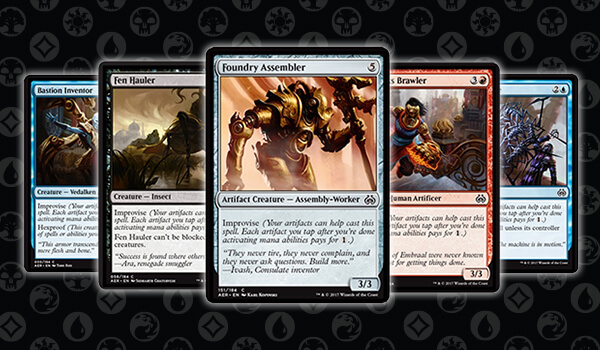 Improvise is a mechanic for blue, red and black (Grixis) cards that you'll find in Aether Revolt. It allows you to ramp out and play cards for less mana and more rapidly in your curve than normally by tapping additional artifacts you may have. Well, you probably know this – the more pivotal aspect is understanding how it all ties into the format. Essentially, most of the color pie is looking to play more artifacts early on in games, essentially giving you free mana. Doing this does not necessarily mean you need to be aggressive – the best improvise enablers often aren't creatures but instead are implements or cheap artifacts. This results in high-impact plays earlier on in the game, which sometimes will be used to stabilize and sometimes will be used to pull vastly ahead of your opponent. Either way, it pays to be on playing to win the battlefield early. 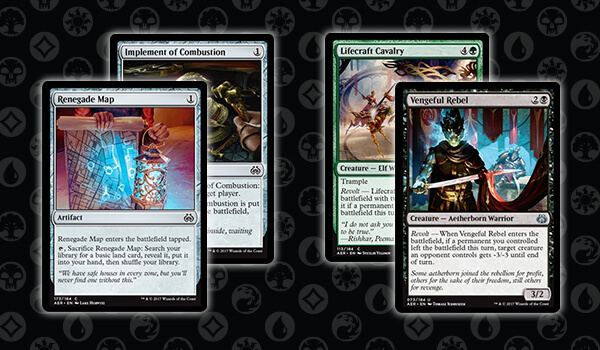 Revolt is the green, white and black (Abzan) mechanic, giving your creatures powerful effects if the correct hoops have been jumped through. Notably, you can trigger revolt from a creature leaving the battlefield. Setting revolt up with Implements, Renegade Maps or blink effects isn't unreasonable and can lead to both card and board advantage. I find this to be a less of a "draft-around-me" mechanic since you don't want too many revolt cards or it will leave you with a rather underpowered creature base too few reliable enablers. However, the further ahead you are, the more likely your opponent is going to have to block and thus the more devastating your cards such as Vengeful Rebel and Lifecrafter's Cavalry will become. The quicker your deck is, the more likely revolt will line up profitably, and you won't need to rely on enablers as often. 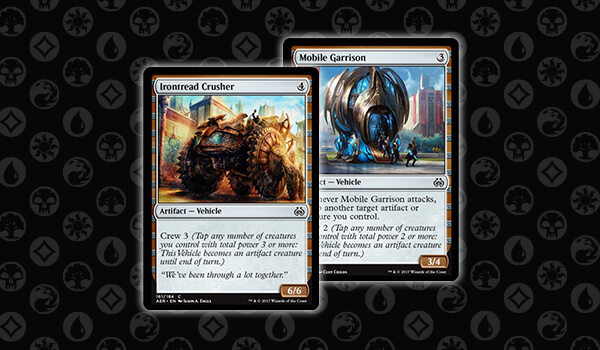 Aether Revolt features vehicles, and while they are not quite as potent as their Kaladesh counterparts, vehicles still lead to faster gameplay and more races due to them often causing your creatures to come into play tapped in order to crew. While the vehicles in Aether Revolt are a bit better at blocking, the attack-to-block ratio is still absurdly high.

All the mechanics in Aether Revolt want you to find low-cost enablers and often benefit from aggression. You get more payoff from synergistic cards as your early plays can help you improvise, revolt or crew as needed. If your deck is not improvising, revolting or doing both, you most likely have a bad deck as you aren't maximizing most of what you will get in Aether Revolt. Even Kaladesh can supplement your ability to accomplish those mechanics well without having any of the payoffs, so it is important to draft them when you can. Speaking of, if you're interested in more about the Kaladesh mechanics, you can find more in my Kaladesh primer. 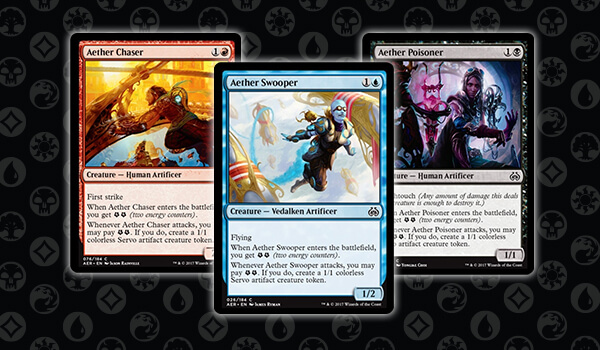 Being quick is of the essence and you want ensure you have enough early plays. In fast formats, getting a critical amount of two-drops (four or more, generally) is pivotal. Essentially, the earlier you get them, the better, as it will give you the option to take more powerful cards over curve considerations later in the draft. Having presence on the battlefield works well with all the mechanics of Aether Revolt, so draft to take advantage of this.

Aether Swooper, Aether Chaser and Aether Poisoner are very strong and an integral part of the format. All of the "Aether" two-drops are all excellent cards and already somewhat reasonable two drops in terms of raw stats. Coupled with the energy and token generation in the format, they can give you early synergy and earn many wins from snowballing. They all work great with improvise since they provide you with Servo Tokens. There are fewer ways of utilizing energy in Aether Revolt, so these cards can act as payoff cards themselves or can work as an energy producer to be used elsewhere – even sometimes feeding each other. Cards like Die Young and Thriving Rhino, for instance, go much later than in triple Kaladesh draft, and having enough energy will make what is often a dreadful pack three into a great one.

All in all, you can never have too many of these guys, they make a great core and allow flexibility. The only commons you should be taking over Aether Swooper or Aether Chaser are premium removal spells such as Daring Demolition or Chandra's Revolution. The Poisoner is a bit worse, but is still strong, especially if you are already in black. 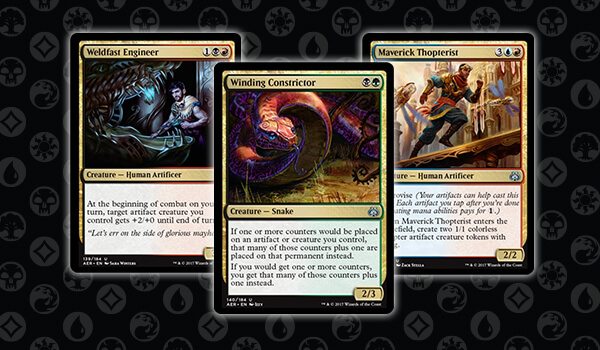 The uncommon multicolored cycle (Winding Constrictor, Maverick Thopterist, Weldfast Engineer, etc.) provides built in "draft-around-me" archetypes. Most of these cards are all quite powerful in their respective color combinations, but also quite strong when put in any deck. They are often synergy-driven and are some of the greatest payoffs of the format. If not for the fact these are multicolored, they would be first picks, but as it stands I still tend to take them highly even with the risk of not ending up playing them. After all, you at the very least know that half of the color combination should be open when you see one in any given pack. They are reasonable signals, and splashing is relatively easy in this format and especially so if you're playing green. The upside can be huge, as mostly every player who passes one of the gold uncommons is essentially giving up on the archetype. The later in the draft, the more potent the signal is. This can allow you to draft an archetype you know is open and also gives you a chance to capitalize on the corresponding gold cards in Kaladesh. 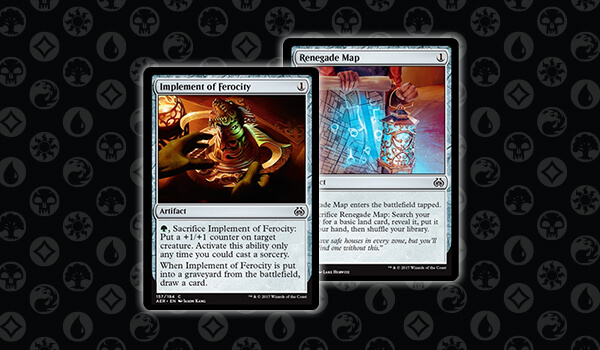 Most of the time in this format you end up with 25-30 or more playable cards, which is a strange phenomenon when so many of the cards seem so underpowered on an individual level. We've spoken a bit about synergy, and I don't like throwing that word around so much without a bit of explanation. You should draft archetype enablers a bit higher than normal in this format as it makes all the other cards in your deck more powerful. For instance, drafting an Implement of Ferocity over a Prey Upon is the type of pick that is unintuitive and could seem outright bad, but the one-drop Implements and Renegade Map all enable and empower revolt and improvise, the major components of the set. Map does this while also enabling you to splash a powerful gold card or bomb such as Release the Gremlins.

A specific example of a cheap artifact that is better than it looks is Consulate Dreadnought, which is going way later than it should. Cheap artifacts can act as mana ramp for improvise cards, and the Dreadnought is a low-cost card that can have a huge impact on the board. It's hyper-efficient and unlocks even more opportunities for synergy with Aerial Modification or Siege Modification.

Most cheap artifacts should be drafted higher than filler, given you still have the opportunity to be improvising or revolting. There are also cards in Kaladesh that care about you having an artifact, which actually is not as common or easy as you would assume. I don't find the Implements other than the green one to be super powerful. They don't always make your deck, but they widen your avenues for deck building and drafting, which is why you should always be on the lookout for them.

This format is super dynamic and contains many different archetypes and even some sub-archetypes within the more broad color combinations (such as Black-Red Wrangle utilizing Defiant Salvagers and Embraal Gear-Smasher).

Drafting Removal>Synergy>Speed is the basic formula for success. Fortunately, this format is pretty well balanced and every color combination is playable and functional. Red is certainly the most powerful color with the highest density of playable commons and uncommons, followed by black-green, while I consider white and blue to both be inferior even though they do often act as good support colors. The better colors will happen to get drafted more, so don't necessarily try to force your way in or out of anything when you can just try to draft the colors that are open at your table.