LoadingReadyRun's Pre-Prereleases are something I adore. While I was incredibly humbled to have been invited for the Kaladesh event, getting a chance to see a range of players—with wildly different styles, ideas and preferences—tackle the new cards every set helps me see the game through the eyes of others. If you have about eight hours to spend watching some fun Magic, you can watch the entire Aether Revolt Pre-Prerelease now:

I put in the time to see as much as possible. After all, I've got a Pauper Cube to update.

To the matter at hand, Aether Revolt had an exciting, compact preview season (though now a worrying beginning to its analysis) and the official Prerelease events are just days away. Enjoying the Pre-Prerelease meant I could take a few notes on what to look for this weekend. After forcing Jon Corpora and Ryan Gomez to help me, we summed up the high notes of what we learned.

Below I've written down some more detail around what Jon and Ryan covered, but I wanted to give you one last tool: a handy Google Sheet of every instant speed trick in Aether Revolt and Kaladesh. Be prepared this weekend!

What We Learned: Removal

There's plenty of removal in Aether Revolt, and even at common it's impressive. More packs of Aether Revolt means we'll see those answers more often. Every color's best two removal spells at common should be considered carefully for your decks.

White has Decommission—like Appetite for the Unnatural from Kaladesh—which gets an artifact or enchantment, and triggering revolt means a bonus of three life. Caught in the Brights is a Pacifism effect, but with Vehicles you can exile the creature too… and you want to that since both white and blue can bounce things back to their hand easily. Be careful.

Blue's Leave in the Dust returns something—Not just your stuff!—as an instant and replaces itself, which is always great for Limited. Ice Over keeps a big thing tapped, making it excellent against Vehicles. However, the same disclaimer applies here as it does for Caught in the Brights. 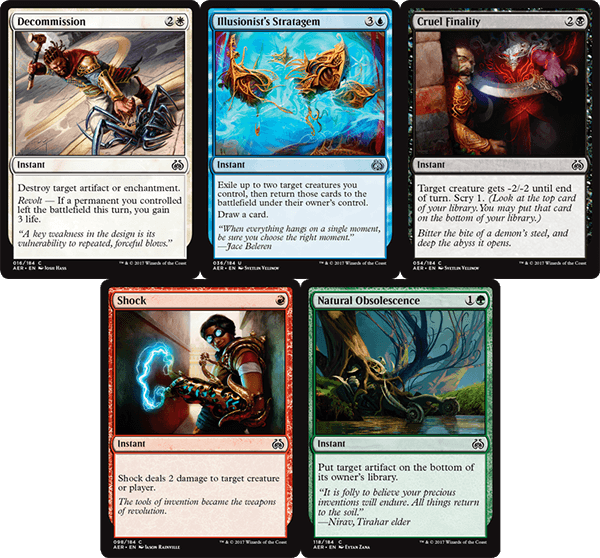 Black's Cruel Finality Shrinks things by -2/-2 and has scry 1—a nice bonus—but three mana means it won't outshine black's sorcery: Daring Demolition. While it takes double black to cast—don't plan on splashing it—it can answer a Vehicle without it being a creature. It's a rare way for black to destroy a noncreature artifact, which is something to keep in mind if you have a Vehicle bomb. (See Aethersphere Harvester for more information.)

Red's got a sweet reprint in Shock, making two toughness even less safe than it was with just Kaladesh. Even better, Chandra's Revolution hits bigger things than you expect red to be able to, reaching all the way up to a whopping four toughness. It's splashable, but doesn't go to your opponent's face. (And I'm doubtful the "tap a land" temporary Stone Rain effect will be potent in Sealed.)

Green's anti-artifact trick this time is Natural Obsolescence, which tucks—puts on the bottom of the library—an artifact. That's better than the graveyard where an opponent might get it back, but like Fragmentize from Kaladesh it's limitation shouldn't be overlooked—hitting only artifacts, like only cheaper cards, means it isn't necessarily the best choice for every deck. On the sorcery speed side, Prey Upon is an unexpected reprint, and efficient way to fight. You know how it works.

What We Learned: Multicolor

All of the multicolor uncommons are strong, and most of them are efficient creatures to boot. Repeatable scry and token generation on Hidden Stockpile, energy plus drawing a card with Rogue Refiner, or just plain ol' hard-to-block Outland Boars are all excellent in different ways. 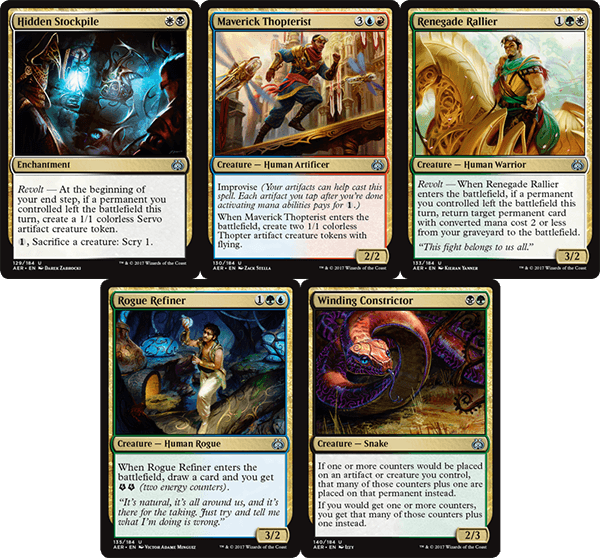 The format seems a touch faster, but that's just as likely the difference in not having Panharmonicon shenanigans take up a 90-minute match. (I have forgiven you, Blake). What was evident is that Aether Revolt is like Kaladesh in more ways than one.

As a set designed for inventors, you can pull off some amazing things. Trick pulled off an amazing Mechanized Production win over Doc thanks to Whirlermaker and the mythic Aura.

That said, Vehicles are still bombs. The (Constructed-playable?) Aethersphere Harvester pulling Kenji back from the brink of 1 life against Jennifer is proof that the power of Vehicles is something you must keep in mind.

Finally, curving out and having things early in the game matters. While there will be fewer Renegade Freighter to humble even the best of opening draws, having a good curve of creatures remains vital, which we saw when Doc curved out against a light-handed Graham: it wasn't a close game. Having an opening hand with creatures and not just Vehicles or doodads like Implement of Examination (see Decoction Module from Kaladesh as well) is needed if you plan to set up shenanigans.

I'm excited to jump into what Aether Revolt brings to Kaladesh Limited. If you are too, be sure to find a Prerelease this weekend to get started.