It's Aether Revolt preview season and there's three things on my mind, in no particular order:

- Which new cards will I get for Commander?

- What does Aether Revolt do to my Pauper Cube?

Today I'm looking a little closer at my Pauper Cube. Yes, that's a Google Sheet link. Yes, that's currently the most accurate way to look at my cube. Yes, I'm aware there are websites that are useful for managing a cube. I'll be honest: Moving all my info into one of the cube services is a ton of detail work I just haven't committed to. (I did add a "Tokens" tab to the sheet to suggest what tokens you need and an "Archetypes" tab to give newcomers a quick overview, so I have that going for me which is nice.)

And if you're all sorts of confused hop back to my Kaladesh and Conspiracy: Take the Crown Pauper Cube Update to get some grounding.

While it's too early to update as we'll need to see all the commons, I did get another glimpse into what's coming in Aether Revolt with Aegis Automaton: 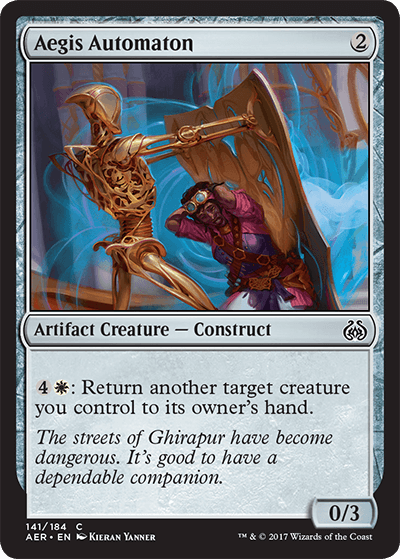 When I first built my cube it was the primal "every best card in each color" kind of cube. Every color had powerful things, but little thought was paid to strategy. What good was green ramp if Ravnica signets could trump Rampant Growth? What good was Brainstorm if we couldn't shuffle the deck afterwards?

A few years ago I finally decided to change how I approached the cube, moving away from strictly powerful cards for power's sake and into archetypes by color pair. That was the turning point from the cube being a pet project to something that's reached far beyond what I thought it could. Giving every deck you can draft something specific to do made the cube make sense. Suddenly, certain cards gravitated towards specific strategies and other cards languished.

It gave immediate context for what was good in the cube and what players found fun.

There's a difference between archetypes and synergies, however. Archetypes can be much broader. For example, "White-Blue Skies" (tempo) is a classic Limited archetype: You draft evasive creatures, bounce and removal, then Soar to victory outracing opponents playing creatures on the ground. Now, are flying creatures and bounce/removal spells synergistic?

This is the type of question different sets answer in different ways. In Khans of Tarkir, the Mardu cared about attacking. It also gave you token creatures. While attacking and tokens aren't necessarily a synergy, the raid mechanic specifically made it one. Attacking a token into obvious blocks meant raid was active, and therefore disposable token creatures were great even without Trumpet Blast.

That mechanical connection illustrates an answer to the question "What do I do?" for players drafting. That's what the new revolt and improvise mechanics do with Aether Revolt. 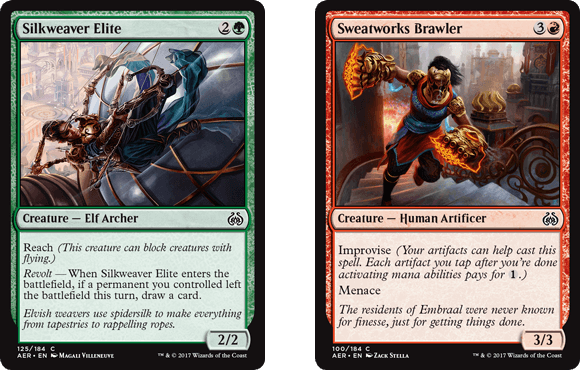 Revolt tells you that effects that bounce your own stuff (see Acrobatic Maneuver and Aviary Mechanic) are better, and it gives you context for green and white as a pair. Improvise does the same for red and white, and two colors that already cared about vehicles (artifacts) now get another reason. Tying both together is fabricate from Kaladesh, giving you either artifacts to fuel improvise or Servo tokens to chump attack/block their way to turning revolt on.

Making Green-White Bounce an archetype only works because fabricate (creatures you want to bounce to make more servos) and revolt (things that care you bounced something) are mechanics telling you to specifically do that.

Take to the Skies

Which brings me to my cube, and why I care so much about the commons in each set: I need mechanics to support the archetypes I've included.

Some mechanics have names, like fabricate. It makes tokens, and both white and green have token themes in my cube. It's obvious and straightforward when you see Chatter of the Squirrel in the pack next to Peema Outrider. Delve, for blue, black and green, points you to a full graveyard which gives context to Wailing Dead and Screeching Skaab and Grapple with the Past.

Other mechanics don't have names and don't make obvious connections. What does seeing Vulshok Sorcerer do with to Silent Departure? That's where multicolor cards shine in my cube, providing a clear direction to take that color pair. Suddenly, Razorfin Hunter and Izzet Chronarch tell you what you should be doing.

The problem with multicolor cards telling you things is that most cards you see aren't telling anything. Named mechanics do a much better job of spelling things out to players than just the text and colors of cards, and it's why revolt has a mechanical name – players would miss the connection (in addition to tying some story flavor into text boxes).

That's the problem I'm trying to solve for white-blue in my cube. It does stuff and that's not strong enough to tell you to go do that. The experienced players get what to do with the color pair since they've seen that archetype before. They delight in the power of cards like Guardian of the Guildpact, Mulldrifter and Deputy of Acquittals. The real problem is emphasizing what the color pair does best. Is it simply evasion backed by removal? Is it value-generation and the flexibility to stay ahead on tempo or grind out more advantages?

Mechanically, there's no "value" keyword (except for, perhaps, cascade) that tells you to "consider blocking and bouncing Mulldrifter with Whitemane Lion, then draw two more cards next turn." There's a line to draw between telling players how to play cards and pointing players at the guideposts in a draft, but Wizards solved the problem by naming mechanics after flavorful elements. You don't have to be qualified for the Pro Tour to understand that you should consider bouncing your own creatures if you have some revolt cards in hand.

A Mechanic for Mechanics

Which brings me back to Aegis Automaton.

It's an early blocker: the 0/3 for two body is a dead giveaway. But it's also a late-game enabler, giving you the repeated ability to Saving Grasp every turn for five mana. Suddenly, Cloudblazer and fabricate creatures look stronger. Blocking and bouncing in response can buy valuable time while valuing up. With three toughness, it blocks a fair number of things safely by itself.

In Aether Revolt Limited it might be possible to set up a Panharmonicon-lite version of a White-Blue Bounce deck thanks to this card at common. While I don't see obvious Pauper (competitive format) applications, the potential for my cube is a bit murkier. My efficiency sense tells me it's just too expensive for something that does nothing for so long. My synergy sense tells me that this is an easy way to point players to bouncing their own stuff as "a thing to do."

Of course, that also assumes self-bounce is the archetype I really want to drive home. So far, having the classic Limited tempo deck that can also grind out extra value has felt right. Sometimes, Mulldrifter is a Divination you get back later with Gravedigger. Sometimes it's just a gross five-mana flier that draws into Pacifism. I'm not sure what adding Aviary Mechanic in addition to Whitemane Lion would do, but I do know cutting something like Mistral Charger or Kor Skyfisher feels wrong.

Aegis Automaton might not tip the scales by itself, but given enough "bounce your own stuff matters" cards it could be part of a white-blue rebuild, just as we did with blue, black and green for graveyard shenanigans.

And that – digging into depths to see what mechanics and gems of commons I need to advance an archetype – is why it takes me playing with cards and looking over multiple sets to update the cube.

While I've been assured our developers are working on it, the best way to buy a bunch of cards using the new TCGplayer Optimizer is to break your large number of cards into smaller orders. Here is each section of the Pauper Cube in convenient chunks. You can "Buy This Deck" and Optimize one section at a time and it should work like a charm. Enjoy!