Black in Standard got a huge power boost in Theros Beyond Death. Treacherous Blessing, Nightmare Shepherd, Gray Merchant of Asphodel, Kroxa, Titan of Death's Hunger, Drag to the Underworld and Cling to Dust have all given a shot in the arm to a color that was already in the running with green as the best color in Standard currently. Even when there's powerful white aggro cards available, I haven't been able to stop playing Black decks, because they seem like the most powerful things to be doing now. A big part of that is Nightmare Shepherd, which I've found consistently impressive early in the format.

But I should start at the beginning. Like every red-blooded Magic player on the planet, the first thing I did upon getting access to Theros Beyond Death was load up Mono-Black Devotion. Maybe it was nostalgia, maybe it was the fact that I already had most of the cards crafted anyway and it was a quick way to start exploring the format, or maybe it was the giddiness that a big Gray Merchant of Asphodel trigger inspires when it goes off and the opponent's life total drops 12 points. Besides, it was a good way to learn both how good the deck is and how my theories about the deck should be built stacked up with what everyone else was doing. 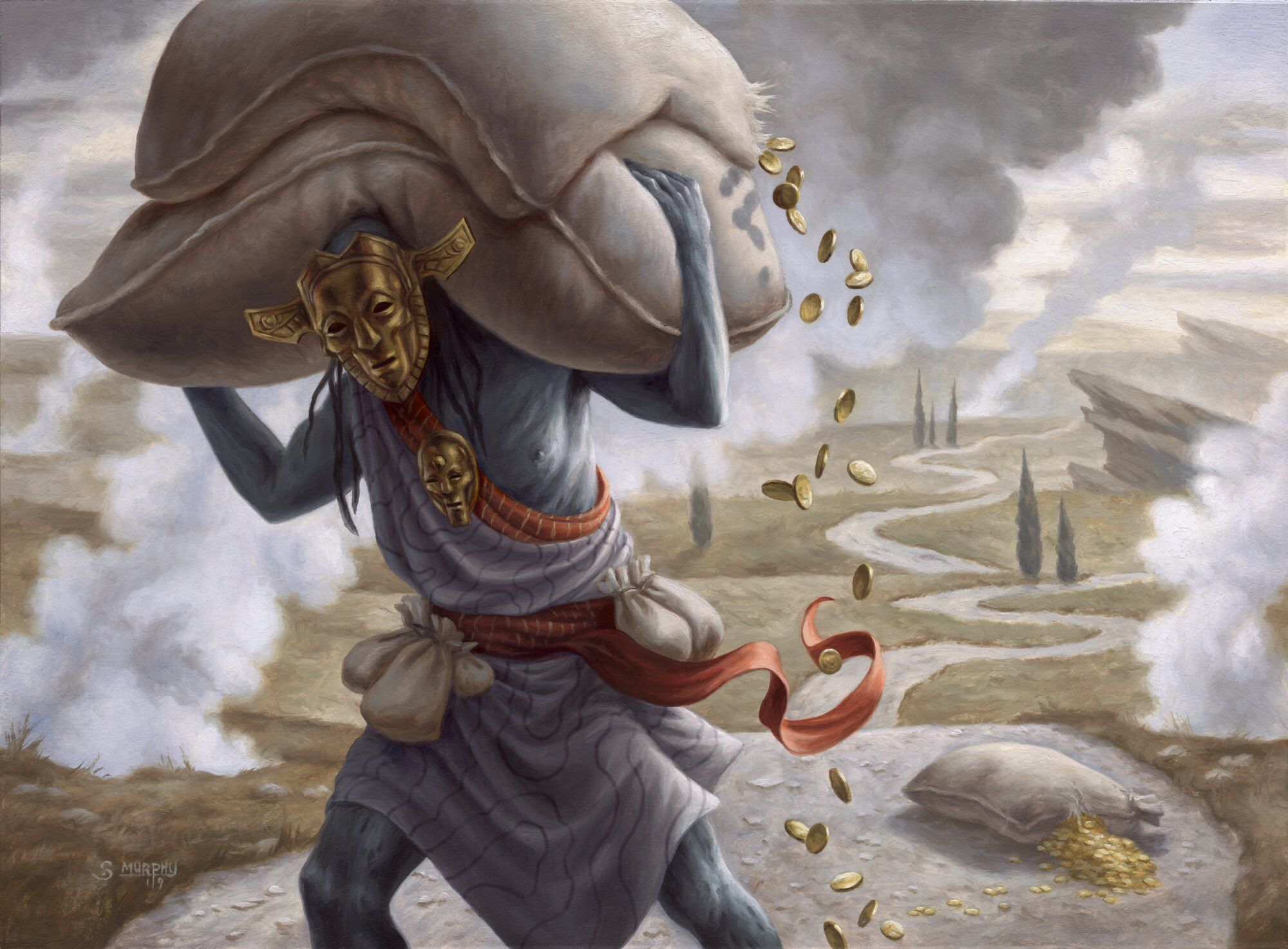 The first versions I played tried to get aggressive using cards like Gutterbones and Knight of the Ebon Legion, and then finish them off with Gray Merchant of Asphodel as a burn spell. In theory I liked the idea, because reach in aggressive decks is something I typically look for whether its literal burn in Mono-Red or something like Legion's Landing and March of the Multitudes with Flower // Flourish in a white-green deck. Black had similar options before, but Cauldron Familiar and Witch's Oven aren't exactly aggressive.

In practice, though, it didn't quite work. Knight of the Ebon Legion is the only functionally aggressive card, and everything else is quickly brickwalled by anything with 3 toughness. Something like Blacklance Paragon helps a little, but at some point it started feeling like Rakdos Knights was a better version of what the deck was trying to do.

Instead it felt like the deck was destined to be on the controlling side. Black's best cards are removal, Cat/Oven, and large Gray Merchant of Asphodel swings. I found myself leaning further into the sacrifice abilities of Ayara, First of Locthwain and Priest of Forgotten Gods to chip in for damage while keeping the board clear.

Ultimately, I settled on this version of Mono-Black:

This version wins in one of two ways: Bolas's Citadel, or Nightmare Shepherd enabling multiple Gray Merchant triggers in a turn.

The first is almost a one-card combo, but Woe Strider is invaluable for it. Last week I said that time would tell on Woe Strider, and even went so far as to call it Warpath Ghoul. As it turns out, I didn't need much more time to decide the card was much better than I thought. Playing Bolas's Citadel with a Woe Strider means each other creature is one more land the deck can bypass when it's playing cards off the top of its library. Because so many cards drain them for life, and Gray Merchant generates enough life to typically pay for several cards, there are often states where unless the top of the library is a string of several lands in a row, a resolved Citadel is game over. The unsung hero towards this plan, though, is definitely Priest of Forgotten Gods. Sometimes it's best to hold on to the Priest's activated ability anyway, but waiting a full turn to use it on turn four can mean that the game ends long before opponents think Citadel will even be relevant. Easily the best curve in the deck is:

You only have to do it once to fall in love with the deck.

Unfortunately, the Bolas's Citadel plan doesn't always come together. Without Woe Strider, it's hard to burn someone out from 20. Hitting six lands in a row is definitely not a guarantee by any stretch, and sometimes the pieces get removed or the deck is under too much pressure to ignore them completely or else it'll be at too low of life to matter. And when that happens, the deck has to turn to a slow burn to win. Nightmare Shepherd looks incredible in this situation. When the deck is forced to actually use its creatures as blockers, it takes over the board single-handedly. Lazotep Reaver chump blocks (or, if you're lucky, trades with) two creatures at essentially no cost. Reaver protects Ayara, First of Locthwain, which speeds up the clock and is a card-draw engine on its own. And with Gray Merchant of Asphodel, it can actually burst through a large amount of the opponent's life. Especially because there are already several other "lightning rod" creatures that must be killed before they come online (Ayara and Priest of Forgotten Gods), Nightmare Shepherd can frequently be the last threat and survive against everything but Esper Hero and Azorius Control decks.

What started to get to me while playing, though, was that it could have some clunky draws. Cards like Nightmare Shepherd, Gray Merchant of Asphodel and Bolas's Citadel look incredible when things are going right, but by themselves can look pretty awkward. Shepherd and Merchant both need at least something in play or they're pretty far below the rate that we would expect from a creature in 2020. Bolas's Citadel doesn't need to have a Woe Strider in play to be good, but a land on top immediately makes the six-drop look embarrassing on turn six.

Meanwhile, the sacrifice element looked very strong. And I had been looking for an excuse to try out an idea for a Rakdos shell that I had watching the Early Access Streamer event last week. Conveniently, it featured many of the same cards that were impressive in Mono-Black, and let me experiment with Kroxa, Titan of Death's Hunger.

Similarly to Mono-Block, I first tried this deck in an aggressive shell. Knight of the Ebon Legion again underperformed, and I didn't bother going down the same route as I had before. Instead, I tried to focus on pushing the sacrifice element as hard as possible, and leaning on access to Kroxa, Titan of Death's Hunger for my eventual endgame.

Kroxa itself automatically trades with one card in the opponent's hand, so any extra value that it can generate starts boosting it into two-mana Divination territory. This black-red shell can:

(*On MTG Arena, make sure to turn on Full Control mode before playing Kroxa, or it will not give you priority to sacrifice Kroxa to a Witch's Oven or Priest of Forgotten Gods.)

What impressed me with this shell was just how powerful Nightmare Shepherd was at protecting or utilizing the creatures around it. With Shepherd in play, the deck goes from needing to protect its pieces to being free to use them in combat as removal spells, while still keeping the cards in play. Doubling up on Plaguecrafter and Kroxa, Titan of Death's Hunger triggers removes the last two creatures or cards from their hand weirdly often. And two Shepherds together protect each other beautifully while ending the game quickly. Anax, Hardened in the Forge was especially impressive in the deck. Turning each cycle of the Cauldron Familiar / Witch's Oven combo into a free 1/1 token is a lot of free value, as is creating more fodder for Priest of Forgotten Gods. Especially cute is any time that Anax gets to combine with either of the sacrifice outlets and Claim the Firstborn to steal a key card, attack them with it, and then turn it into a Satyr. The speed with which Anax kills when paired with practically any other card in the deck almost makes me wonder if there's a different build with Embercleave available—though it might be too cute for this deck to take advantage of.

Kroxa, Titan of Death's Hunger continued to be an interesting puzzle. The card is not trivial to escape, especially in red-black, which already has several recursive threats already. Any time it does escape, though, the game is usually over within the next turn cycle. Once the first attack connects, Kroxa has typically done 12 damage already. Combined with the rest of the incidental damage, that is typically enough on its own. If they somehow have survived, or blocked, making sure that the opponent is hellbent creates a virtual win anyways. Finally, it almost never comes up, but it is possible to attack with Kroxa the turn it enters play by using Claim the Firstborn on it after it escapes, because the card has a converted mana cost of only 2.

The strength of the deck, combined with the absolute blowout potential of the old Claim the Firstborn / Witch's Oven combo has me in love with the deck. It's been performing very well against the decks I've thought were serious contenders in the metagame so far, and would be on the shortlist of decks I'd play if I had to register something tomorrow.

More than any other time, at the start of the format you should be testing things out, changing cards, and generally trying to figure out what the best plans are rather than sticking to a set formula. But if it helps at all, and in the interest of sharing what I've been doing, here's how I've been sideboarding with the deck against a few of the top decks.

I want access to Drill Bit to take away a Citadel or a Gray Merchant that they're building to, but drawing too many risks being a dead draw late. Instead, I'd rather try to keep the board clear while building synergy with Nightmare Shepherd. Cling to Dust comes in as a way to draw cards and also disrupt their Cat/Oven.

Plaguecrafter is solely for Dream Trawler, and you should try to keep Teferi, Time Raveler off the board so that it works. Also, hold it for that purpose—don't run it out just for a card from their hand unless it leaves them dead on board.

The goal here is to provide a small amount of disruption, but primarily focus on building an engine as quickly as possible. The small dorks can be handled with Mayhem Devil pings, the large creatures are largely irrelevant because Priest of Forgotten Gods will eventually eat them, and few of their cards have trample. Uro, Titan of Nature's Wrath can be targeted by Claim the Firstborn, meaning there are now several high-value Claim targets between it and Hydroid Krasis that make it worth playing.

Please do not take Heliod, Sun-Crowned with Claim the Firstborn you will cry. Otherwise, the goal is to control the board. Blight Beetle doesn't work forever, but it can stop them from going off too quickly.

If they have Hushbringer, punish them by playing all four Kroxa, Titan of Death's Hunger. A turn-two 6/6 is not remotely fair.

There are a lot of other decks out there, but for the most part these are the general ways that I've been sideboarding against the various archetypes. If there's anything that you think I'm missing, feel free to hit me up on Twitter and I'll be happy to talk through it with you.

For now, may your dreams be your opponents' nightmares.