This past weekend I was faced with a dilemma. I was torn between good and evil, angels and demons, babies and pacts. I didn't know what to pick. I had tasked the people of Facebook to help me make a decision. Should I listen to the chorus of singing angels and play a Sigil of the Empty Throne Deck or listen to the whispering of my inner demons and play the Demonic Pact deck? The people of Facebook had chosen my weapon. 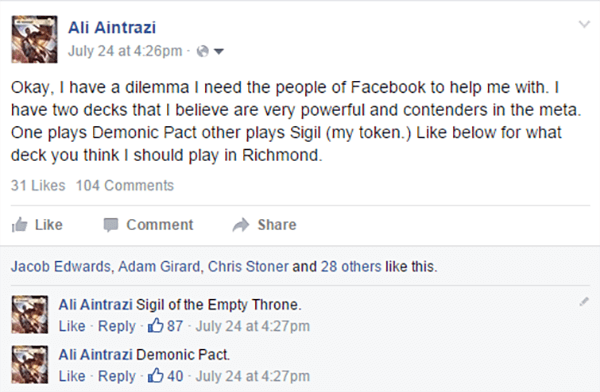 It was to be the holy Sigil deck. After all, the deck would allow me to fly over my opponent's creatures and slay them with my son in tow. 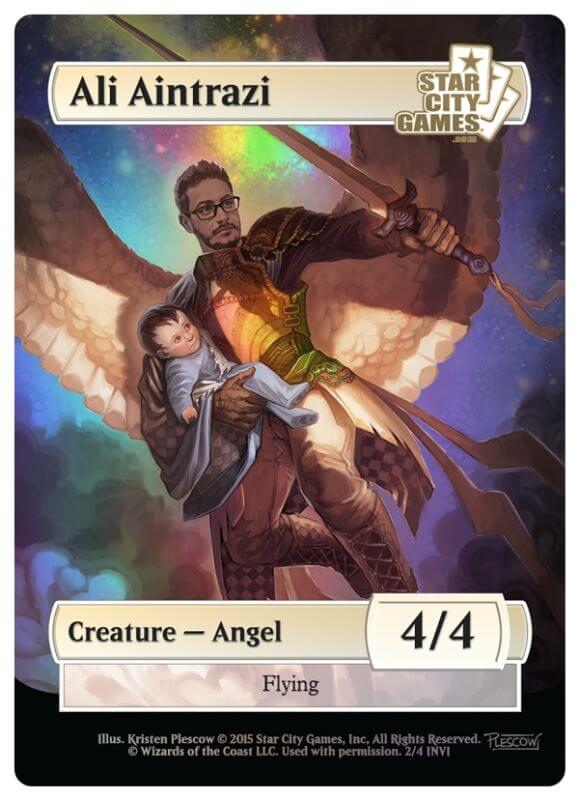 What could be more glorious than that? More honorable even? So I had went to bed Friday night with my deck choice locked in. It was going to be a great tournament and one that would echo through the centuries!

...but as I slept, I had dreams of crushing my opponent's with Demonic Pact. Casting it every game on turn four and always having the answer to not die to the enchantment. My head was filled with promises of power. How could I lose when I got to Cruel Ultimatum my opponents over three turns? As I awoke from these dreams of grandeur my mind was foggy, while I had previously been ready and steadfast in my choice I was now doubtful and questioning. Confused thoughts and worry had seeped into my frail mind and I was torn.

I decided not to Panic and I brought both decks with me to the event site. I had filled out two registration sheets, one with each deck. Fittingly enough I had the Demonic Pact deck in a Swamp Ion deck box and the constellation deck in a Plains Ion deck box. I held one in each hand. As the judge casually strolled over to collect decks and deck registration sheets the demonic whispering began again and I envisioned myself winning the whole thing with Demonic Pact. I handed the judge my Demonic Pact deck list and just like Liliana, I had made a pact with demons. This is the list I played.

This is what I was working with when the dust finally settled. I won't go through the gruuling match-by-match report, but throughout the day I made little mistakes here and there that ended up costing me matches. In my feature match round I Dark Petitioned for Disperse when I should've gotten Disdainful Stroke since the only way my opponent could've won was by resolving Ugin, the Spirit Dragon. He did have it and resolved it, then he proceeded to beat me in game two making the match a draw. Little things like that throughout the day just built up and knocked me out of contention. I still really like the deck and believe it has potential, especially after rotation since the deck loses basically nothing. I still recommend this deck, just not as a deck to just pick up and pilot right away. You need to play some games first and get a good feel for it. The deck seemed to do well against everything except Abzan decks where it would struggle. That should've been sign enough for me to stay away from it and just play the constellation deck. But greed, power, and demons had filled my head, and I was justly punished for playing this deck over a deck that put 4/4 me tokens into play.

Another Demonic Pact deck I was looking to play was more devotion oriented. It did very well against aggressive decks and heroic, but against control style decks it wasn't so hot. This was the devotion list I had also tested.

As you can see it has the combo of Fleshbag Marauder and Liliana, Heretical Healer that most heroic decks can't really handle. Fleshbag is an edict effect against them that they can't Negate, Disdainful Stroke, Stubborn Denial, Gods Willing, or Ajani's Presence. The best way for them to counter it is to just play more guys and sacrifice one of their weaker creatures. The fact that you can also recur them with Liliana hurts them even more. This was a nice appeal to the deck because I felt like heroic decks were a very good choice for Richmond.

Against aggressive strategies the Gray Merchant and Whip of Erebos package is usually enough. You also can't underestimate the Lifelink you get from Liliana, Heretical Healer. Attacking or blocking for two or three turns with her is usually good enough to give you a significant advantage in the matchup and allow you to progress the game to a board state where they can't win.

The GR Devotion matchup is about even. You just gotta get a lot of devotion, go wide, and then drain them with Gray Merchants and Demonic Pacts. Disperse will also help you along with that plan allowing you to effectively "buyback" Gray Merchants.

Control is a little strange since Fleshbag can either be awful or decent in the matchup. Flipping Lily is nice but otherwise Fleshbag won't get too many things worthwhile from your opponent.

Erebos's Titan however can be amazing against them and can go the distance. Demonic Pact can be scary against control since they can just counter your ways to get rid of the pact and have you die to your own pact. And that is an unfortunate way to go. The sideboard helps a bit with Duress, Ashiok, Treasure Cruise, and Read the Bones but your maindeck is geared to beating non control strategies so it's still an uphill battle.

This was another version of the pact deck I was toying with. You have more ways to get rid of Demonic Pact via Sultai Charm so it shouldn't be as scary. The only problem is you can't really run Dark Petition in this list because you have Dig Through Time and you'll be delving a vast majority of your graveyard away. I'll let you in on a secret: all Sultai decks look better on paper than they do in real life, that's one of the reasons I didn't play Sultai and instead played UB. It was surpassingly harder to kill Demonic Pact in this list; Dig Through Time is a very powerful card, but it's not Dark Petition. Dark Petition can find you an answer, threat, or way to deal with your Demonic Pact. On top of all that you can also flash it back with Jace, Telepath Unbound for more value later in the game. I kept wanting to add Counterspells to the deck and Counterspells don't really play too well with Demonic Pact. I basically wanted to play a different deck when playing Sultai. I could be wrong though; maybe a couple of Dissolves or Clash of Wills couldn't hurt. It's just awkward to sit behind counter magic when you have a Demonic Pact in play that is ticking away.

I figured I'd give you guys and gals all these Demonic Pact lists for you to toy with as you please since I'm actually going to get off Demonic Pact until the rotation happens or a new list emerges. I've just had enough with the card for now, I've gotten my fill of dark energy. I should've listened and just played Sigil of the Empty Throne like some of you said. So from now on that is what I will be playing with for the next couple of weeks...that and Turbo Fog...and possibly Pyromancer's Googles.

The constellation list I would've played this weekend would've been this.

If this deck looks familiar it's probably because this is what John Taylor Top 8ed with at the SCG Open in Richmond this past weekend. I was on the same list as he was, but I unfortunately did not play it. Congrats to him on his success throughout the weekend. This is where I will start with the constellation list. I think I will find room for the third Sigil of the Empty Throne since that card seems to close out games pretty quickly. I also believe finding room for Mr. Siege Rhino could just make the deck stronger and give you some sort of reach instead of being "all in" on enchantments. The board needs some fixing too now, especially since the Abzan Rally deck took the whole thing down. The best sideboard card we can probably play against them is a couple of Agent of Erebos. Agent of Erebos works with the rest of our deck triggering constellation and Sigil of the Empty Throne so it seems like the most logical choice. However it is a little slow and they will see it coming from a mile away. If you want to surprise them you could play Hallowed Moonlight instead or alongside Agent of Erebos. I'm just not sure if leaving two mana constantly open is healthy for a deck that wants to tap out a lot.

I'll be gone at Gen Con for the next week and enjoying "the best four days of gaming." I'm pretty excited about that. It'll be my first time getting to experience the whole Gen Con experience. The last time I was there I didn't get to experience it since I was too busy winning US Nationals. Sucks, I know.

As always, thanks for reading!