Did you ever notice how Magic art often uses the same perspective in composition? If you didn't, or if that last sentence sounded like gobbledygook, allow me to elaborate: more often than not, the art of Magic is drawn as if the viewer is eye-level with the subject, looking straight at it. This perspective is a good way for the audience to clearly see what they are looking at, whereas more extreme angles might distort the visuals and confuse the viewer (see Chandra, Fire of Kaladesh for an example). Eye-level is the default perspective for art.

For example, imagine you are taking a picture of something. How do you line up your shot so that you take a good picture? Well, first and foremost, you probably want to make sure you can actually see what you are trying to take a picture of. So you make sure there is nothing obstructing the foreground. Then, you have to make sure the subject fills an adequate amount of space. Get close, but not too close. Make sure the camera is level. And bam. You have the most basic of basic pictures. It's not bad, but like all things you are forced to see ten million times, it starts to grow stale.

He, along with his frequent collaborator Jana Schirmer, is the spicy variety in Magic art. Working in cahoots or alone, Johannes Voss uses extreme angles to make his pieces pop.

Let's take a look at Angelic Destiny. At first glance, you might write this off as normal perspective. After all, the figure is facing the audience head on. However, notice how the angle is below eye level. If there was a camera, it would be positioned low to the ground, looking up at the figure. This makes the woman look taller and more imposing. Also, the shot is panned out. A cliché shot would want to get closer to the figure, so it would probably cut the legs and do the shot from the waist up. For example, look at the cropped image below. 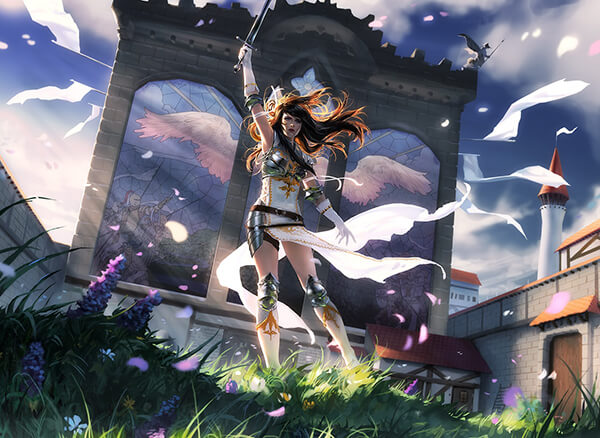 This allows us to get a closer look at the woman's face. She fills a larger portion of the space. You don't want a bunch of empty space in your painting or it looks half-finished and hollow. On the other hand, this view sacrifices the amount of green grass we can see. That splash of color helps balance the white and makes the image more vibrant. There is no sense of scale in this cropped image either; it's just another figure reaching for the sky, as pictured on every movie poster and video game cover ever. The original image uses perspective deliberately to create the perfect atmosphere. In the original image, the figure is part of the world, connected to the land they are determined to protect. 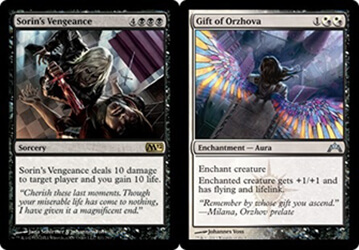 Some artists are leery of exaggerated angles because they can be distracting, or make it harder to tell what is going on. However, that attitude can be counter-intuitive. Sometimes taking a different angle allows the audience to see things they couldn't from eye-level. Both of these cards use high shots looking down in order to give the audience a better view of the action.

In Sorin's Vengeance, the ceiling-cam helps us see more of the scene. Imagine if this angle was taken straight-on, at eye-level. We wouldn't be able to clearly see both figures' expressions. Instead, we would see a side-view obscured by the sword. Also, we might miss out on Sorin's sassy hand. That would be the real tragedy.

Gift of Orzhova is taken high above the subject, looking down. It's such a distorted angle that we can barely see the subject's feet. However, it's the most effective angle to evoke that mood of standing on the precipice, overlooking the crowded streets of Ravnica. With this view we can clearly see both the towers below and the beautiful stained-glass wings. Another thing Johannes Voss excels at is vivid lighting. He has a way of making things Radiate. If you get the chance to see this card foiled, don't say no. It's breathtaking.

As you can probably deduce, Johannes Voss did heaps of art for the Innistrad block. His dramatic composition really helped bring out the epic good/evil conflict of the block. All of these cards are bursting with energy and flavor (Blood Artist tastes mostly like iron, in case you were curious). Let's take a closer look at each one. 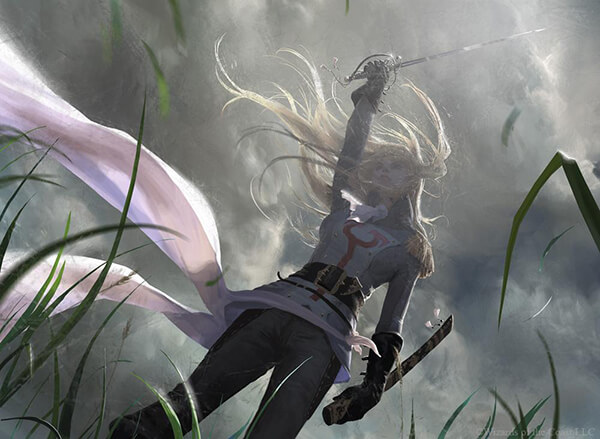 Thalia, Guardian of Thraben is an incredibly distinctive card. Why? Notice how similar the pose is to Angelic Destiny, with one hand held aloft, a long stream of fabric trailing behind the heroine. Like I said before, this pose can be seen thousands of places. It's not the positioning of Thalia that makes the art unique. It is the positioning of the camera. The extreme low shot makes Thalia look tall and imposing. She's a figure with strength, despite being a petite blonde (exchange her sword for a stake and she could pass for Buffy). The canted angle makes her a diagonal line, as opposed to a vertical one. The difference is that if she was straight up and down, she would be a firm-yet-static figure. Diagonals give her movement, making her look ready to strike at any moment. However, there is a slight tilt to her head, preventing her entire body from being one continuous line. Continuous lines are boring. It's the intersection of lines that draw our eyes.

Here's a clear example of how framing sets the tone. The full image gives us a view of the artist's workshop, complete with stark, imposing brushes and glasses of blood paint. In the cropped image, all we see is Mr. Snooty interrupted mid-stroke. You can practically hear the hipster-like wheedle to his voice ("I only use Type-O blood in my paintings"). Without the abundance of blood and the black framing of the brushes, the macabre turns into the mediocre. However, this angle catches it all. We get to see both artist and art, spooky cathedral setting, grim supplies, etc. 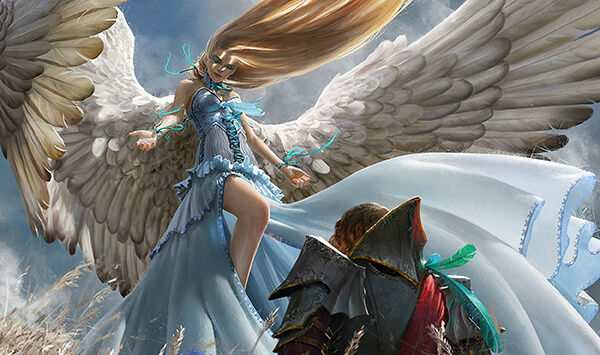 Restoration Angel is to the eyes what Golden Corral is to someone who's spent the last three days Fasting. It bombards the senses with a flurry of fantastic color, sweeping motion, dynamic angel angle, and atmospheric lighting. Everything about the angel, from her upturned palms to her serene expression, reeks of confidence and composure. The sweep of the skirt and swish of the hair look like the she just burst into existence out of thin air. Highly appropriate for a card with flash. The ribbons around the angel's hands, along with the plumes on the soldier, give a splash of neon color to a more toned-down palette.

More recently Johannes Voss has done artwork for some notable cards like Soulfire Grand Master, Dwynen, Gilt-Leaf Daen, and Dragon Hunter. I touched on Dwynen in a previous article, so let's look at the other two.

Magic art doesn't lend itself to drawing solitary figures well. All the images are locked into the same landscape ratio, meaning that they have to be wider than they are tall. If you just have one person, you either have to zoom in on them so they take up most of the space, or somehow fill the empty void to either side to make the piece work. Soulfire Grand Master has a wide, bent stance, meaning that she can fit in the shot while still allowing us to be relatively close. The curve of the cave provides framing, drawing our attention back to her, while the wavy green lines add color and energy.

The camera drops it down low in here, again using a ground angle to make the Dragon Hunter look ten feet tall and more imposing than an eye-level shot would. From this perspective, it's not hard to believe this warrior could use reach. His extended spear fills up the negative space, making the picture look more full and busy.

In addition, Johannes Voss has done fantastic art for many other sets. Let's look at some of his artistically note-worthy cards.

Shaman of Spring is one of those cards where you have to see it foiled to get the full effect. The white flowers glow, and it gives the card this otherworldly aura. Even without the extra shine though, the art is magnificent. The white flowers break up the color and there is a ton of intricate detail in the clothes.

There is so much energy in Duskmantle Prowler's jump. The harsh diagonal of its body makes it more dynamic, swinging from the rooftop with deadly intent. The spires of the city behind provide a sense of scale, and loom over the scene grimly. The point of view could very well be Duskmantle Prowler's next victim, looking up just in time to see shadowy death leaping from the roof.

The panned-out shot makes this piece interesting. We get to see the Skyknight surveying their domain, looking out over a massive area. The brilliant blue draws our eyes back to the main subject, but the sweep of the griffin's wings bring it out again.

Dark Impostor's fisheye angle lets us see both our Vampire Assassin as well as his victim slumping into a pool of their own blood. The hat provides mystery and intrigue, with the creamy coat and glove breaking up the otherwise bleak palette. There's a lot of minute detail, like the halo of light around the lamp to the streak of blood trailing from his lips. The whipping tail of the jacket provides movement, crystallizing the moment Dark Impostor sweeps away from the scene of the crime. It's an energetic, captivating piece.

Now you've had both your crash course on perspective and the artistic stylings of Johannes Voss. Next time you flip through a stack of Magic cards, take a moment to note how often the art is drawn at eye-level to the viewer. Once you start recognizing it, you'll gain a greater appreciation for artists like Johannes Voss, who are willing to take a risk and give viewers interesting angles and distinctive cards.