The most magical thing about Magic is its exquisite and lush illustrations. If Magic: The Gathering had no art, and consisted of black and white text boxes with some squiggles in the upper corner for mana cost, nothing would change about the core game, however anyone who has ever proxied a deck knows how uninspiring and tedious a monochrome Magic game can be. The art is what really brings the cards to life.

If you happen to be an A.D.D. scrubbo like me, you probably spend more time looking at the art than what the card actually does. (Like that one time I built a Pauper deck entirely out of Rebecca Guay cards. It was awful, but so pretty.) On the off chance that you are a seriousplayer, you still probably have a favorite artist or pet card that is functionally as useful as salmon-flavored toothpaste - but you own a playset of it anyway, just so you can take it out and admire it occasionally.

In honor of the hard-working artists behind the cards, I want to shine a spotlight on those influential artists and the works they have contributed to illustrating the multiverse.

This month I chose Raymond Swanland.

Raymond Swanland has a name that sounds like he should be composing symphonic music and possesses a distinctive and atmospheric ring to it. He's been making Magic art since the days of Future Sight. Before that, he was contributing to the world of geekdom with his art on the Oddworld series of video games.

I rifle through around ten thousand Magic cards a day and, frankly, sometimes the art starts to blur together. When I can thumb through a pile of 50+ random cards and immediately spot the card with Raymond Swanland's art, that's not just an indicator of skill: that's style.

In the art world, style means that there is a common theme that makes pieces visually similar to each other. It means I can look at two unrelated cards and know that they share an artist. Key features of Raymond Swanland's style: a harmonious color scheme and low-intensity color. 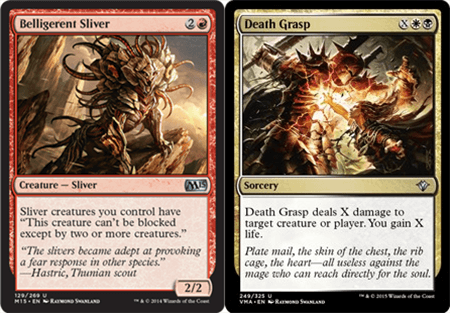 Let's look at the similarities. Both of these cards contain muted colors that steer away from high contrast. Some basic color theory for you: when colors on opposite ends of the color wheel are used, it's called "complementary colors" and it makes both colors appear more vivid. Think of the contrasting red and green colors found on a Christmas tree, for example. Notice how little of this effect there is included in the above pictures. Belligerent Sliver is mostly shades of red, orange, and yellow. Death Grasp has mostly yellow and yellowish-orange with a slightly greenish cast to the background. These colors are all close to each other on the color wheel. This is called an "analogous arrangement," and it helps create visual harmony.

There you go, you have now leveled up your posh attribute.

But wait, there's more! Not only are the colors all tightly grouped, they are also low in intensity. That means that the colors are not saturated. They do not knock loudly on the door to your eyeballs, screaming "Hey, look at me! I'm red!" Instead, they are more faded, swimming towards the brown end of the spectrum.

Usually, harmonious color schemes and low-intensity color combinations are good for low-energy pieces. Put simply, in the hands of an amateur artist, a color scheme with no contrast and low intensity will have nothing that stands out. It's the kind of art you use for wall-paper at a dentist's office - not for action-packed fantasy scenes. But that's exactly what Raymond Swanland's art is, and it does its job very well. That's because instead of using cheap contrast or eye-grating heavy saturation, he uses lighting to draw the audience's attention and control what we focus on in each piece. For example, check out these cards: 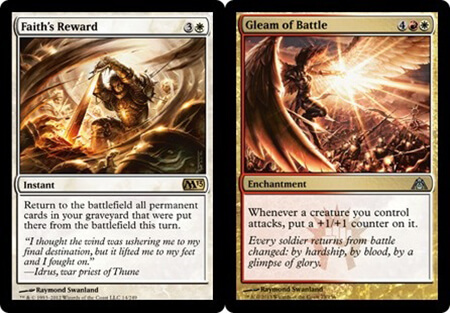 Well-composed art encourages your eyes to travel along a plane, rather than staying stationary.

What is the first thing that catches your eye when you look at these cards?

For Faith's Reward, it's probably the sword. The light is focused on the blade. From there, your eye will travel along the blade, and then the swirly-twirly dust motes guide you around the rest of the piece. Now, check out Gleam of Battle. The first thing you may notice is the angel's massive hadoken (or Aurelia's aurora, if you will). It is the center of light in the piece, but it's not located dead center, which is a recipe for static, boring pieces. From there, your eyes follow the rays of light out to the other parts of the art, guided by the swooping lines of her wings, which are also focused with light. If you are feeling especially fancy, you can refer to the treatment of light in an art piece as "chiaroscuro."

These are the basic features of Swanland style. Now let's look at some of his most well-known cards. 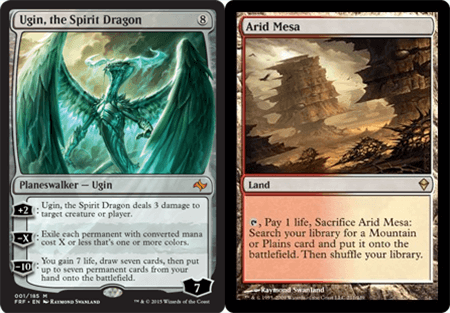 His most popular card right now might be the Standard sweetheart, Ugin, the Spirit Dragon.

Ugin, the Spirit Dragon uses cooler colors than the other cards we've looked at, but it still has an analogous color scheme. Notice how it ranges from teal, to green, to yellow. The planeswalker Radiates pride and confidence, conveyed by the strong vertical lines of his wings. There isn't a lot of movement. Ugin appears to be standing, unassailable and resolute, atop a summit.

Contrast that with the heavy diagonals of Arid Mesa. At its heart, this is a picture of a bunch of rocks standing placidly amidst scrub. However, notice the angle of the picture. It was painted as if the camera was tipped to one side. Instead of the ground being flat, now everything is skewed. Those lines that would run horizontally through the rock now create diagonals. In art, diagonal lines create a sense of movement. Besides the birds and some dust, nothing is really happening in this picture. However, because of the perspective, you get a sense of movement. It may be a few slabs of rock, but you get the distinctive impression that at any moment you could crack these babies open for a Plains or Mountain.

Enough about cards that are actually relevant. Let's finish up this art tour with a few of my favorite pieces by Raymond Swanland. 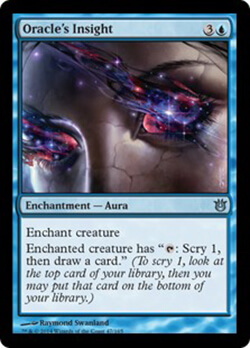 You haven't truly lived until you've seen a foil copy of Oracle's Insight. All of Mr. Swanland's art has tightly controlled lighting, but the extra sparkles make this card absolutely Radiate when foil. Plus, the way the purple in the art melds with the blue of the border is fantastic. Artists don't control the borders on the cards, but it's always a happy accident when the two Harmonize rather than clash. 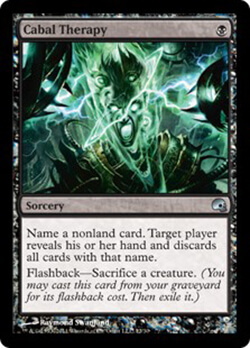 Look at how heavily atmospheric this piece is. You can practically hear his shrill screams as he has his life force ripped from his quaking mortal frame. The green lightning also gives the whole card a "Frankenstein" feel to it. 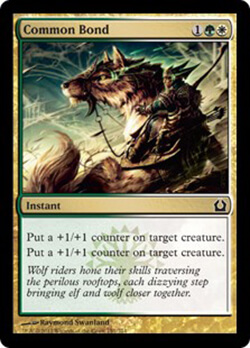 Okay, I'll admit, I mostly like this card because of the giant wolf. I'm a sucker for high-density fur. Also, those trees in the background look like they belong on a Japanese ink painting. By my count, that's two things I'm a sucker for. If the flavor text was Teen Titans fanfiction, this card would be a Liana Burnside slam-dunk. 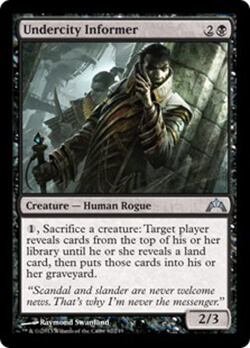 Look at this greasy denizen of the underworld. This is a man with no moral quandaries and an enormous wardrobe budget. The upper half of his face remains in shadow, adding to his mysterious, bad boy mystique. Just like Arid Mesa, a slightly tilted perspective makes the art more dynamic than a straight-on angle would be.

Finally, let's take a second to appreciate this triumvirate of tornadoes. Look at how shiny Devastation Tide is. Raymond Swanland is a master of Smoke and fire effects. Also, Thousand Winds may be a bad board wipe, but as far as wind elementals go, he's pretty adorable. Look how mischievous that little rascal is.

That concludes our sampling of Raymond Swanland's sumptuous contributions to Magic: The Gathering. Join me next month as I choose another artist to fangirl over.