Today I'd like to share two decks I've been working on. The first is a Bant Megamorph deck with some new tools and a few old ones that you may have forgotten about. The second deck is a W/U Mastery of the Unseen deck with a lot more going on than meets the eye. If you're looking for something powerful but a little different from what your opponents are doing, I've been tuning these decks for you!

Why Bant Megamorph Over Bant Company

Bant Company has exploded in popularity the past couple weeks and now everyone is prepared for it. Everyone is gunning for Rally, so sideboards are full of answers to Collected Company (Dispel, Hallowed Moonlight, Duress, etc). I was crushing 8-man events on Magic Online with the Bant Company deck I wrote about last week, but then I did poorly with it in the MOCS against some of the best players in the world. Too many people were prepared for it.

This led me back to the drawing board. I really liked some aspects of the deck. Sylvan Advocate was great early, great late, great at blocking against Atarka Red, and great at pressuring any other deck. The card is basically the new Fleecemane Lion except it makes your Lumbering Falls into a 5/5 hexproof beater (or up to an 11/11 if you have all four Sylvan Advocates on the battlefield). Reflector Mage was also very good, acting as an answer and a tempo play all rolled into a single card. Most of the other cards in the deck were lackluster, but one card in particular over-performed for me in the tournament and the rest of the week after: Stratus Dancer!

Stratus Dancer is the Steph Curry of Bant decks! In testing this week, I would sometimes cast it on turn two as a Welkin Tern, but usually I would wait and morph it with two mana untapped so I could counter the opponent's next spell. There are so many instants and sorceries in Standard, many of which are important to resolve in the mid-to-late game. I countered Rally the Ancestors, Collected Company, Dig Through Time, Treasure Cruise, Crux of Fate, Nissa's Renewal, a Crackling Doom after Soulfire Grand Master was activated, and oftentimes just the first removal spell that was pointed at a creature. If this weren't enough, I would get a 3/2 flying creature out of the deal and return all the Deathmist Raptors from my graveyard to the battlefield. The card swung so many games for me. There were even times where I had an opportunity to cast an uncontested raided Wingmate Roc and I chose to morph Stratus Dancer instead because it was the more powerful play. I just wasn't happy with the supporting cast.

Other Cards to Consider

Trail of Mystery can generate a huge mana advantage, allowing us to hit a land drop every turn of the game. This would let us run away with Mastery of the Unseen, and would be especially useful against control decks or grindy midrange decks. It's a little clunky though, and didn't make the cut, though I could see it finding a place in the 75. Secret Plans is similar to Trail of Mystery — great in the long games but not very useful in the tempo games.

Hooded Hydra is great with Mastery of the Unseen, but a lot of creatures are great with Mastery of the Unseen and better on their own than Hooded Hydra. If the opponent casts Crackling Doom and you have a manifested Hooded Hydra, you could pay GG to flip the hydra, then sacrifice the hydra to Crackling Doom to make five snakes. That, my friend, is how to convert GG (mana) into GG (handshake from opponent). If you want to add a bit of variance to your deck or if you value the fun factor high enough, you might want to include a couple copies of Hooded Hydra.

Hidden Dragonslayer is a great creature to manifest against decks with large creatures, but it's very slow when played as a morph. We're reasonably efficient at buying time, especially when our draw involves Reflector Mage, but six total mana is a lot to kill a Siege Rhino. I'd sooner play Valorous Stance to kill it early and then use Den Protector to buy it back later. Lifelink is also relevant against Atarka Red though, so if you're a fan of Hidden Dragonslayer, it certainly has uses and there are far worse cards to add to the deck.

Speaking of far worse cards, Icefeather Aven is the Reflector Mage that you would rather find with Mastery of the Unseen. It's another way to surprise the opponent if you want to be fancy with all the tricks. I think it's a little narrow and overpriced for the effect, but if there is ever a deck that would want Icefeather Aven, this would be it. So if Icefeather Aven or any other Bant morph is your pet card, this would be the deck to try it out in. Sagu Mauler, anyone?

Another direction I've been experimenting with is cutting green altogether. Sylvan Advocate is the card I miss the most, but the mana is a bit smoother in this deck than in the Bant decks. It's a little less flashy, but it has the tools to compete with the major decks in the metagame. It also completes the cycle of white weenie decks. I've discussed the best way to build around Knight of the White Orchid in White/Black, White/Green, White/Red, and now White/Blue.

With this deck, as with nearly all of my Knight of the White Orchid decks, I choose to draw first. The reasoning is because we don't gain our tempo in the first two turns. Instead we gain it in turns three through five. By drawing first, we can play Knight of the White Orchid on the third turn to accelerate us straight to four lands when the opponent only has three on the battlefield. This means the opponent is suddenly playing catchup on their fourth turn. If they played a threat on their third turn that we need to deal with, we can play Silkwrap the same turn we play the knight. If they did not play a threat we need to deal with, then we leave up Disdainful Stroke mana for their fourth turn play. Then we attack with Knight of the White Orchid on our fourth turn, triggering raid for Wingmate Roc. Think about that sequence and how powerful it is. The opponent played first and they untap for their fifth turn with only four lands on the battlefield and no creatures to our eight power worth of creatures. There is no reason for us to be on the play in most matchups if we have Knight of the White Orchid in our deck.

The deck isn't completely reliant on Knight of the White Orchid either. It is designed to play defense or offense early and then turn the corner in the midgame. Silkwrap and Stasis Snare can neutralize an opposing early threat such as Anafenza, the Foremost or Sylvan Advocate. Or we can use Reflector Mage to Recoup the tempo of being on the draw and to set up turns four through six, where we capitalize on that tempo swing.

But what if we don't have Wingmate Roc?

No problem. We have Gideon, Ally of Zendikar to continue the pressure or to provide blockers if we're on the backfoot without removal. And even if all our creatures die, Gideon, Ally of Zendikar attacks as a 5/5 to trigger raid for Wingmate Roc. Or on our fifth turn we can play Stratus Dancer face-down. This forces the opponent's hand. Whenever they play a relevant instant or sorcery, we counter it and gain a 3/2 flying creature. That is yet another way to proactively set up a midgame tempo swing with this deck.

Another integral piece to the puzzle is Mastery of the Unseen. It's our second turn play if the opponent hasn't given us a target for Silkwrap or if we do not have the Silkwrap. Or it can be our third turn play following a Knight of the White Orchid trigger. This will set us up for the long game and/or provide a steady stream of potential raiders for Wingmate Roc. Mastery of the Unseen also finds us Stratus Dancers to flip over to counter spells or it can provide protection for our Silkwraps and Stasis Snares from Dromoka's Command. It can also gain us life so we stay ahead in a race and out of burn range.

The fourth Disdainful Stroke comes in against control and ramp decks. Valorous Stance comes in against Siege Rhino decks and/or Kalitas, Traitor of Ghet. I also like it against Esper Dragons. Dispel is good against Rally, control decks, and Jeskai Black. Hallowed Moonlight is mostly for Rally, but I will sometimes bring in a few copies against decks with a strong token presence. I tried cutting Archangel of Tithes from the sideboard but that made Atarka Red matchup a lot worse. Archangel of Tithes is hard for them to beat and is worth the slot. Surge of Righteousness is more versatile but less potent against red. The last card in the 'board is Treasure Cruise. I replaced the fourth Mastery of the Unseen with it because it's less redundant and serves a similar purpose of aiding us in the long game. We tend to fill up our graveyard with fetch lands and even more so in post-board games when we bring in more spells, so I like bringing in a Treasure Cruise in any matchup that goes long.

As far as when to board out which cards, you should always ask yourself which cards are most important and least important in the matchup you're facing.

Mastery of the Unseen can come out or get shaved against fast decks where you likely won't have time to activate it (or if you do, you're winning anyway). I often leave these in the more I incorporate instant speed effects into my game plan. Stratus Dancer can come out if the opponent doesn't play many instants or sorceries or fliers, such as against the more aggressive Eldrazi decks. Silkwrap stays in against Rally, Jace decks, and aggro decks, but I'll sometimes take out 2 copies against Esper Dragons or decks where I don't want so much removal and it is my worst one. Usually this involves bringing in Valorous Stances. Disdainful Stroke comes out against Atarka Red. Reflector Mage can sometimes come out against decks without many creatures, especially if the creatures have abilities that trigger when cast or entering the battlefield. Gideon, Ally of Zendikar can come out, usually when Archangel of Tithes comes in or if I plan to rely more heavily on Mastery of the Unseen in a post-board game. Lastly, Wingmate Roc can come out against control decks that wrath our board, such as Esper Dragons. We tend to prefer leaving open Mastery of the Unseen mana and/or morphing a Stratus Dancer instead of tapping low for Wingmate Roc.

I haven't yet decided which deck I'll be playing this weekend, but I'm liking where I'm at with these decks and a few of the other white decks I've been talking about since the release of Oath of the Gatewatch. 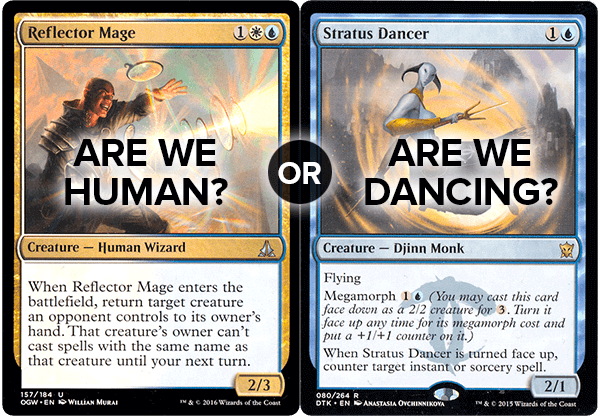