For years players have been begging for enemy-colored manlands. Heck, as a huge black/green and blue/green fan, I have been one of them! My third favorite color combination was always black/white, so it all seemed to point in the enemy-colored direction. (My desires that is, not an inevitably for manlands.)

The reasoning was simple: enemy colors just had cooler designs. For me personally the art was always more pleasing to the eye, and the design space was simply more unique. Allied colors are the game's standard, while enemy colors are still a somewhat unique experience when they appear in a set. If I had to make an uneducated estimate, I would say that allied colors get about three times as much exposure than enemy colors do, if not more. This, of course, is going to make enemy colors feel more special when they show up. Interestingly enough Mark Rosewater has admitted to this pattern (allied cards being the norm and enemy cards being special) and referred to it as a mistake that R&D has been aiming to correct.

But perhaps we're getting ahead of ourselves.

Gather round, kids, while grandpa Lepore weaves you a story. There was actually a time, believe it or not, when manlands didn't even have a color. No, it's true! Feast thine eyes upon the factory...of Mishra!

Mishra's Factory was basically the first time a land could ever attack. I mean, like, ever. But it would not be the last. Doing a search results in finding a total of eightteen lands that have the ability to become creatures throughout Magic's storied history. That's a very small number when you consider the game has over 13,000 cards! There are of course more lands when you take into account the lands that can produce creatures, but for the sake of this article, we're specifically talking about the lands that can become creatures.

Many of the lands also can be organized into convenient little groups. Two of those groups were actually cycles of five. Take a look.

That's basically all of them.

Some turn into artifacts, some have first strike or flying or what have you, some permanently become creatures, some gain all creature types, and some can pump themselves or others. One thing to keep in mind is that nearly every single manland that has ever been printed has seen competitive play at one time or another. There's just such a huge benefit to being able to play lands in your deck that can also double as win conditions. Even more so when those win conditions have evasion, or get larger, or interact favorably with your other creatures (I'm looking at you, Pack Rat).

Manlands inherently reward you for playing the one thing that every Magic deck simply has to play: lands. Heck, noncontrol decks have even been known to go up to 26 or 27 lands occasionally simply because some of those lands were also creatures. Manlands provide a huge advantage and give the accompanying decks a great deal of both versatility and utility.

It's surprising that the list up there comprises all the lands in Magic that become creatures. With so many sets and blocks and cards that have been printed, along with the immense benefits manlands provide, it feels like there would be more, doesn't it?

Well now there is!

My preview card? No, this is a new card called Lumbering Falls from Battle for Zendikar that was spoiled earlier this week. But it finally happened! We have new manlands, and they're enemy-colored! I for one could not be more excited. The Raging Ravine and Celestial Colonnade players of the world have had their toys for years. Decks like Sultai had access to a single dual-colored manland - albeit Creeping Tar Pit is a very good one - while Jund had access to two! Whether they used Lavaclaw Reaches or not is beside the point (and they definitely did during their time in Standard).

But wait...you're saying you already knew that there were enemy manlands in the set, and that they were divided between Battle for Zendikar and Oath of the Gatewatch thanks to Mark Rosewater's tumblr?

Well perhaps you would be interested in seeing what the other manland in battle for Zendikar looks like. (I say this knowing full well that you would never have jumped ahead to see the card before reading everything that came before it.)

(What is it with Zendikar blocks and vents?) 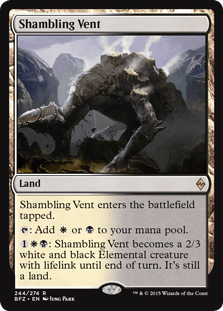 Yeah, let's not beat around the bush: this is a good one and it's going straight into Esper Control decks everywhere, as well as with many others.

In regards to Zendikar block manlands, three mana is the cheapest cost we have to activate a manland, as indicated by Creeping Tar Pit, Lavaclaw Reaches, and Stirring Wildwood. The other manland from Battle for Zendikar, Lumbering Falls, costs four mana, so right now we're falling into the lowest bracket of activation costs, which is awesome.

The other great aspect of this guy is that it has lifelink, which is one of the strongest abilities you can give a creature in my opinion outside of evasion. Unfortunately we don't have evasion, but I suppose we can live with that.

One sweet interaction to consider with the manlands is that, with the new awaken mechanic, we can put X counters on the Shambling Vent, let's say four for the sake of argument, and when we activate it we'll have a 6/7 lifelinker. Again, just awesome.

The other benefit to being the black/white manland is that you manage to dodge not only Ultimate Price by being multicolored, but any piece of removal that can't target black creatures. This should be helpful in older formats as well, where things like Slaughter Pact see play. We also can't be Abrupt Decayed, you know, since we're a land.

Ultimately Shambling Vent reminds me of Orzhov Keyrune, if Orzhov Keyrune had an additional power and wasn't a sad artifact that no one wanted to play with. (Okay, that was a little harsh. I apologize, Orzhov Keyrune.) I'm super excited to play with this card and I have little doubt it will be found in Standard as a four-of in week one after Battle for Zendikar's release. Having an attacker that you can wait to activate until your opponent is tapped out, that promises to help you in the life race against aggressive opponents is quite the pretty package. And I can't wait to pay three mana to unwrap it in a few weeks.