Wizards bumped up the latest Banned and Restricted announcement in order to make it a week earlier than anticipated. This seemed to indicate that Standard cards were about to be banned. Players are already starting to prepare for the Pro Tour, so the Standard bannings needed to happen as soon as possible.

These three cards represent the core of Standard before the bannings. I don't think that many players were expecting this much of a shake-up. The impression was that Wizards might go after Emrakul, the Promised End because of how oppressive the card can be. Reflector Mage on the other hand has been around for quite a while now. Smuggler's Copter was the heart of aggressive decks, so those decks will now have to make some adjustments.

There are both positive and negative effects of the bannings. Wizards didn't go after just one archetype, this banning goes after the entire format! Banning three cards at once from Standard is almost unheard of. The bannings mean Standard is going to change, and some of the more powerful cards are no longer around. I think many players were sick of losing to Emrakul, the Promised End, or not having a way to deal with a turn two Smuggler's Copter. Some archetypes may have been weak to one of these specific cards, or deck that they were in. Now some previously oppressed decks can have their time to shine.

Standard is in many ways a wide open format. The biggest downside of these bans is players' investments in the cards themselves. Most Standard players have already picked up four copies of Smugglers Copter, and in some cases four copies of Emrakul, the Promised End for the Aetherworks Marvel deck. These cards have immediately lost most of their value now that they are not Standard-legal. It is tough seeing cards which you have invested in banned, and put into a position where other cards you may not own go up in price as a result of the bannings. I would like to further break down each of the cards that have been banned. 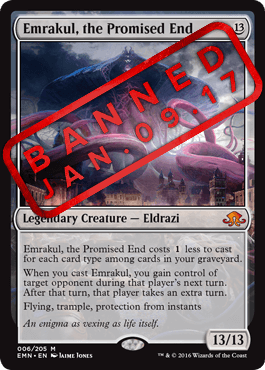 Aetherworks Marvel's best friend is Emrakul, the Promised End, and being able to put this huge Eldrazi into play on turn four ends games on the spot. Worth noting, Aetherworks Marvel still has access to Ulamog, the Ceaseless Hunger though. Aetherworks Marvel decks were arguably the most powerful strategies in Standard, so those decks have been knocked down a peg, but will certainly continue to exist. 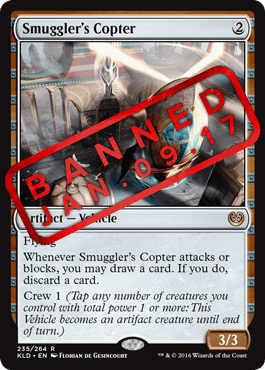 Smuggler's Copter seemingly went into over half the decks in Standard. The card forced players to have artifact removal spells in their sideboard just to answer it. This powerful vehicle makes sorcery speed removal worse in general. Another factor which may have gone into the banning of Smuggler's Copter is the printing of Heart of Kiran. Heart of Kiran is another two mana vehicle that should see plenty of Standard play, and having multiple two mana vehicles with such a high power level is a lot. 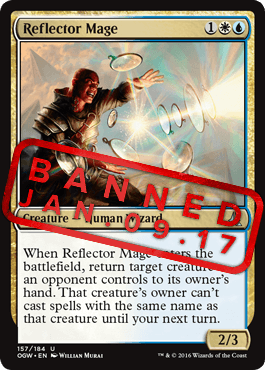 Of the three cards banned this was the most surprising. Reflector Mage did see play in the White-Blue decks, but even in those decks it may not have been the best card. In fact some of the best white cards in Standard still remain at large in Thraben Inspector, Archangel Avacyn, and Gideon, Ally of Zendikar. Reflector Mage was even better in previous Standard formats when it could be found off Collected Company. The banning of Reflector Mage hurts white-blue decks, but was White-Blue Flash one of the top decks in Standard? At one point it was, but currently the point is debatable. So why ban Reflector Mage?

The changes to Standard are huge, but the changes in Modern are almost as big. The following cards have been banned: Golgari Grave-Troll, and Gitaxian Probe. 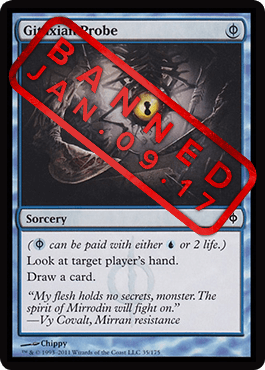 Both Infect and Death's Shadow use Gitaxian Probe to help provide information about the contents of the opponent's hand, but also to get a card into the graveyard to fuel delve for Become Immense. Now Become Immense is actually significantly less powerful indirectly, because of the banning of Gitaxian Probe. Taking away an extremely cheap card should help the format slow down a bit. The question is if these decks can recover from the loss of Gitaxian Probe.

Death's Shadow also used Gitaxian Probe as a means to lose life. The life loss was actually beneficial! Both Infect and Death's Shadow are going to struggle to find replacements for Gitaxian Probe. Of these two decks Death's Shadow suffers more I think, we will see if that deck can recover. There are only so many cards that cause self-inflicted life loss. Infect should still be around, but might not run four copies of Become Immense anymore, we will have to wait to find out.

Then there is the Blue-Red Prowess deck. This is a bit of a pet deck of mine, and now with Gitaxian Probe gone I'm not sure Blue-Red Prowess will be competitive in Modern anymore. I hate to say that, and hope I'm wrong. The nut draw featuring turn two and three kills won't be as easy to come by. Gitaxian Probe is a zero mana way to trigger both Kiln Fiend and Thing in the Ice. Beyond Blue-Red Prowess there are other decks like Storm and Delver variants that also get much worse without Gitaxian Probe. 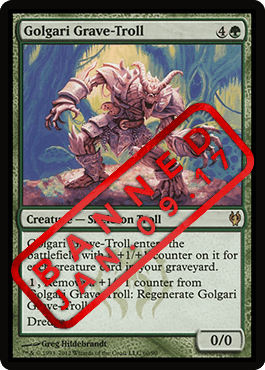 The other banning in Modern is Golgari Grave-Troll, though this banning only affects one deck. Undoubtedly Dredge has become a powerhouse in Modern, so something needed to be taken away from it. Interestingly enough Golgari Grave-Troll was banned not so long ago, in order to stop Dredge. When it was unbanned a couple years ago Dredge still didn't see any play. This is what leads me to the question of whether the banning of Golgari Grave-Troll was the best way to hurt Dredge? There are other dredgers which can be played, specifically Golgari Thug comes to mind. While Golgari Thug does only Dredge four, potentially putting Narcomoeba back on top of your deck is nice.

Dredge could also simply add additional copies of Life from the Loam. Dredge isn't dead but it is worse now, though banning another card like Cathartic Reunion would likely have a similar effect. Overall the changes to Modern do seem like they will cause dramatic shifts, and the same can be said for Standard. This is the perfect time for building new decks or tuning forgotten ones, which is exciting! With Aether Revolt around the corner Standard and Modern feel more unpredictable than ever.