It took more than ten years, but we can finally play the Fossil cards from Yu-Gi-Oh GX.

While some of Jim "Crocodile" Cook's cards have made it into the real life TCG over the years, the heavy hitter Fossil monsters were always pipe dreams for nostalgic duelists like yours truly.

So while Fossil Dyna Pachycephalo and Gaia Plate the Earth Giant have been around for a decade, what about the actual Fossil cards? In short, they're Rock Fusion monsters summoned using materials in the graveyards. Sounds like a pretty good "going second strategy" if you ask me.

Also, if you missed GX and you're wondering why the character's nickname was "Crocodile"? Well, he had a crocodile tied to his back at all times, because apparently he needed to be coded as even more Australian than he already was with an accent and outback safari fashion.

It's an anime. What do you expect? 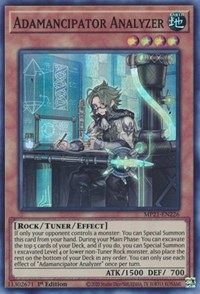 Monsters? In My Graveyard?

The nifty Fossil Fusion brings the deck together, though it's not exactly a conventional Fusion Spell. You'll banish materials from any graveyard, but you can only banish them from graveyards, which is a really interesting twist on the ever-changing requirements for Fusion Summons.

Technically, the Fusion Materials are pretty simple: all you need's a Rock monster and any other monster with a specific Level, as noted on the Fusion Monster you're trying to summon. But let's back up a moment to Fossil Fusion's restrictions. Since you'll need monsters in the graveyards of specific Levels, as well as Rock monsters, you'll need a supporting cast that can help you throw a bunch of Rocks into the yard plus some interim monsters that can stand on its own. The deck's real requirements wind up being generic and very specific at the same time, like some sort of Schrodinger's Fusion Materials.

If you haven't been paying attention to Yu-Gi-Oh over the last few months, then you might not be aware that there's a perfect deck to do just that: Adamancipators. I wrote about the strategy here and here , but the tl;dr version is this: they're Rock monsters with a variety of Levels that quickly land themselves in the graveyard, satisfying your Fossil Fusion needs.

About Them Fossil Fusions

Simply put, the Fossils can pop out a ton of damage. Most of these cards have piercing damage or double attacks or some other cute effect, but the big bad is definitely Fossil Dragon Skullgios. Not only can it switch the ATK and DEF of any monster it battles, but all of its damage is doubled. In short, if you attack a monster with 0 DEF you'll dish out a whopping 7000 damage with one monster.

Then you have Fossil Warrior Skull Knight, a double attacker and a controlling force that influences the board post-mortem. There really isn't a "bad" Fossil in the Extra Deck, so I'd suggest playing them all.

Sadly, with no real Main Deck monsters to speak of, the Fossils rely heavily on other cards, to, well… even exist. I know, I'm hyping up the Fusions. But Weathering Soldier's the closest thing you have to a Fossil Main Deck monster, and yes, I'm ignoring you, Fossil Dyna Pachycephalo and Fossil Tusker, because you don't help this strategy at all.

So… Give Up And Play Adamancipators?

Definitely not! The Fossil Fusions are still the highlight of this deck, but the Adamancipators fuel your graveyard with a big added bonus of field presence. In terms of card economy, they're really affordable. In terms of the secondary market? Not so much.

With the Fossil Fusions having such loose material requirements, you'll just focus on what makes your Main Deck strong. You won't be sacrificing any power or consistency that way on either front.

Of course, I'm pretty sure any Rock theme will suffice when you're looking for a supporting cast for Fossils, but I chose Adamancipators because they're the easiest and mst straight forward. You might not be impressed with the random smattering of Adamancipators you're able to throw out, but keep in mind that the primary goal here is to create something that can stand on its own two feet while sending Rocks to the graveyard.

My point is if you really want to play Magnet Warriors with Fossils instead, who am I to tell you that's bad? After all, this is me we're talking about.

There are a few things you can do to speed up the Fossil game plan. Since the Adamancipator Tuners are so versatile, you can basically start with any of them and come out with the same end result: some smattering of big monsters. Adding in ways to accelerate yor ability to see or use Fossil Fusion isn't a distraction.

Miracle Rupture, Foolish Burial, Weathering Soldier, and Extra-Foolish Burial are all necessarily evils in my mind. By themselves, they might come across as mediocre 1-for-1 trades, but when Fossil Fusion and the Fossil Fusion Monsters are that important, it's worth it to play all of them.

When it hits the graveyard, Weathering Soldier searches Fossil Fusion from your deck to your hand. Miracle Rupture and Foolish Burial accomplish that too, but they also have the added bonus of drawing an extra card or yarding Block Dragon respectively.

Going Second? Why Not?

While you can make do with going first, going second is largely the better choice for a few reasons. One, Fusion decks tend to work better when they have more cards, AKA the extra draw when you let your opponent go first. Two, without many counters to speak of, it's not a bad idea to have cards like Ash Blossom & Joyous Spring when your monsters don't produce negations all that easily.