Now that Celebrations has come and gone, the next Pokémon TCG set in the Sword & Shield series releases on November 12, 2021. While the Single Strike style and Rapid Strike style have had their time to shine, it is finally time for a new style to rise: Fusion Strike!

The new Fusion Strike style builds upon the themes we've seen in the last few sets and adds a new theme with the "Fusion Strike" style keyword. The face Pokémon for the set, Mew, encapsulates this theme with an all-new attack that can copy any attack that your Fusion Strike style Pokémon have, so you can combine the powers of several Pokémon to make a powerful deck! This set also includes the Gigantimax forms of several popular Pokémon so you can collect the awe-inspiring forms of Gengar, Inteleon, and more.

Today, we're going over all the sealed products for Fusion Strike so you can get the most packs out of this set without overspending.

Max Out on Packs, Not Your Budget

Unlike the previous set, Pokémon Celebrations, Fusion Strike will be available for purchase as singular booster packs or the larger sealed products. Release quantities should also be much higher for Fusion Strike and, like we saw with Evolving Skies, will be more available after the initial week of release. If you are looking to pick up your own products, this means that you shouldn't have to pay more than MSRP unless you're looking for a specific product during the initial release window. 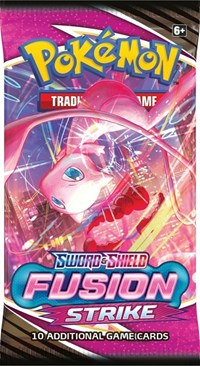 The single Booster Pack will almost always be the most plentiful product found in stores, and unless you're absolutely determined toe have booster packs on release day, you shouldn't be paying much more than $4 to $5 per pack. For every other product on this list, you want to keep in mind how it compares against the price of a single pack so you don't end up overpaying for the same packs. 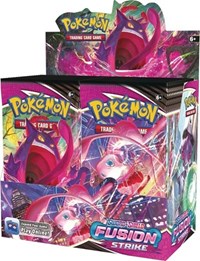 A complete Booster Box is the best way to get the most Booster Packs all at once, but it's also always the most expensive option on the list. With less than a month until release, the $155 price tag might start to go up as store allocation becomes locked in, especially if the current shipping issue trends continue and allocation goes down right before release. At $155, the Booster Pack price is a little over the MSRP on a Booster Pack, but is still the best way to get this many packs until after the initial release wave. 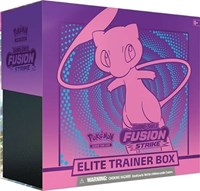 Since the popularity boom in the Pokémon TCG started, Elite Trainer Boxes have been some of the most desirable products released. Each set has its own design that makes these boxes pop on display and also have a few accessories that make them fun to collect.

However, because of this popularity it is also very hard to find them for a good price. While your big box stores might have them for close to the MSRP of $39.99, they are incredibly short supply and will likely be gone right after they are put on shelf. If you're just looking to get Booster Packs, this product is one to pass for the moment, but if you want the bundle for your collection, you can expect to pay around $55-$60 until after the initial release wave hype dies down.

Each main set release typically has a few Promo Boxes that include a promo with art only found in this box, an oversized version of that promo, and a few Booster Packs. If you really, really, really like the Pokémon found in these boxes, they can be a cool addition to your collection, but at the current price of $49, you have to really want them.

Once the initial release hype has died down, these boxes can usually be found on shelves in stores for closer to $30, but will almost always be worth passing on if you can find Booster Packs elsewhere. 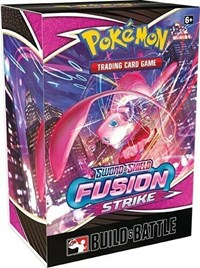 If you enjoy playing the Pokémon TCG, one of the most entertaining products released with each set is the Build & Battle Box. In local game stores, these products act as prerelease kits for players to preview the set in the weeks before release. If you have an LGS that offers these events, you should definitely consider going—they're a blast!

In addition to four packs of Fusion Strike, each Build & Battle Box comes with a promo card from Fusion Strike and an evolution line that helps you play with your packs. While we haven't seen the promo cards for this set yet, in previous sets they typically hold some value and are worth keeping in your collection. Though a bit expensive, if you have some friends that all play the Pokémon TCG, these Build & Battle Boxes can be worth the price tag.

The Build & Battle Stadium, on the other hand, is currently much cheaper and a better option for players. Each Stadium kit comes with two Build & Battle Boxes and four additional Fusion Strike Booster Packs as prize support. That means that these Stadium kits have three times the number of Fusion Strike booster packs for only $9 more! These Stadium Kits were only introduced in the last main set, Evolving Skies, so stores may have a harder time moving them, which means they could be even cheaper for you to pick up and enjoy!

It's tough for any Pokémon set to follow the excitement of Celebrations, but Fusion Strike is looking to be packed full of cards for players and collectors alike. As we get closer to the release of Fusion Strike we will see more of the cards included in the set. The cards rumored to be included from the Japanese set Fusion Arts will definitely get anyone that loved the Sword & Shield video games pumped!

Mew VMAX might be the face card of the entire set, but only time will tell if it can hold its throne against Inteleon VMAX, Rillaboom VMAX, Cinderace VMAX, and Gengar VMAX now that they have turned into their Gigantimax forms!