If you haven't noticed, I've become a little obsessed with one-card combos lately. While they're flashy and full of brag potential, it's kind of a necessity rather than just a personal flair. With so many hand loops and fields full of negations in modern Yu-Gi-Oh, sometimes you need brilliant, economically tight combos just to compete.

So when I thought about Megaliths, literally the last thing I thought about was creating 1-card combos going first OR second. In fact, I asked around to see what my friends thought about the new Ritual theme from Ignition Assault, and the responses were underwhelming at best, ranging from "Ugh," to "I don't like them," and even "I've never heard of those."

If you want to read about insane Union Hangar combos or what you can do with Adamancipators, those high-level strategies are probably more familiar to you than Megaliths. I won't be offended if you have no idea what any of the Megaliths do, and I guess the Megaliths won't be too offended either. After all, they're inanimate statues.

…But today I'm gonna bring them to life. 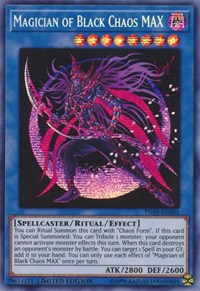 Strong, Powerful… Like… Rocks
Each new theme that's released tries to create its own approach, its own gimmick, or a unique way to stand out, and it turns out that when you rewrite the rules of what cards can do, anything is possible. The concept of making a Ritual archetype without Ritual Spells seems pretty farfetched when you put it down in black and white, but it's not really a new idea. Zefrasaber, Swordmaster of the Nekroz sort of set the precedent for that concept, but now there's a whole theme centered on that idea.

You can Ritual Summon all of the Level 4s with any Megalith card, but they also act as avenues toward your summons when they're on the field: that's Megalith Och, Megalith Ophiel, and Megalith Hagith. Additionally, they all have effects when Ritual Summoned that give the deck more consistency.

It's pretty straightforward on the front end, but the theme's really efficient since the monsters substitute for what would are traditionlly inflexible combo pieces. Megalith Ophiel and Megalith Hagith search your monsters and non-monsters respectively. Megalith Portal and Megalith Emergence recur Megaliths so you're not totally bereft of resources when you're trying to Ritual Summon, and the deck even has its own boss monster that does more than search. As a total package it's really solid.

Boss Monster Without An Extra Deck
Just like Machinas, which I wrote about a couple weeks ago , Megaliths don't have much of an Extra Deck to rely on. But Megalith Aratron's effects earn it the status of boss monster, letting you Ritual Summon on either player's turn. Aratron also has a Quick Effect to counter your opponent's plays and Megalith Bethor blows up cards whenever it's Ritual Summoned, rounding out the theme with some extra control power.

Without a theme-stamped Extra Deck there's a certain level of flash missing, but it's something to keep in your back pocket as you build resources with Ophiel and Portal. Thankfully, there are enough Ritual support cards floating around to boost Megaliths to a point where you don't need dozens of overpowered on-theme cards to make it work.

Preparation of Rites, Senju of the Thousand Hands, Manju of the Ten Thousand Hands, Extra-Foolish Burial, the half dozen Impcantation cards… the lack of "instant win" buttons shouldn't deter you from playing Megaliths, because Rituals as a class of monster have support for days. Check out this buffed up version of the strategy I put it together: there was actually so much ritual support to draw on that I had to cut some of it down to get to 40 cards.

Another Day, Another 1-Card Combo
Despite Rituals' ability to compensate for expensive Ritual Summons, I'm never one to turn down 1-card combos when possible; why bend over backwards for unnecessary caveats when there are ultra-powerful cards at your disposal. The combo below might seem long, but compared to that Exodia combo I wrote on, there's only one card that you absolutely can't draw to keep the combo live. Virtually everything below is something you'd already be playing in a Megalith deck, combo or not! Just start with Deskbot 003.

-Synchro Summon two copies of Herald of the Arc Light, then overlay both into Gallant Granite

-Herald of the Arc Light searches Megalith Aratron, while both Deskbot 001s come back to the field

-Synchro Summon your third Herald of the Arc Light, then Synchro Summon Old Entity Cthugua, then Xyz Summon Number 60: Dugares the Timeless and draw a card

-Banish Deskbot 003, Deskbot 001, and Gallant Granite for Block Dragon, but then tribute it with Megalith Phaleg to summon Megalith Aratron, searching Megalith Ophiel and Megalith Hagith from Block Dragon 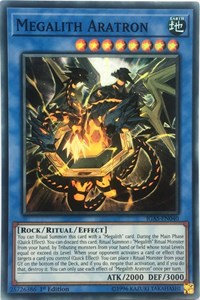 -Use Ophiel's Ritual ability, tributing itself to Ritual Summon Megalith Hagith from your hand, which searches Megalith Portal

-Activate Megalith Portal, then use Hagith's Ritual effect and tribute itself to Ritual Summon Megalith Och from your hand. Megalith Portal triggers, getting back the yarded Megalith Hagith

-Megalith Och draws and discards a card, but like the Cthugua draw earlier, it's an added bonus that might let you skip a step (or steps!) in this combo. It's better to assume you won't draw exactly what you need, so I'm not factoring in either of those cards

-Use Megalith Och's Ritual effect, tributing it to Ritual Summon Megalith Hagith and search Megalith Emergence. It's important to note that the Level 4 Megaliths can only Ritual Summon other monsters once per turn per name, but can use their "when Ritual Summoned" effects any number of times

-On your opponent's turn, summon back Aratron with Megalith Emergence, and Megalith Portal gets back Megalith Aratron

Now you have an impressive number of negates and disruptions on the board, with Number 38: Hope Harbinger Dragon Titanic Galaxy, Abyss Dweller, and Megalith Aratron shutting down swaths of cards while Tornado Dragon and the N'tss under Dweller can each pop single cards. Keep in mind you also have an Aratron and Bethor in your hand, so you can Ritual Summon the Bethor and pop several other cards.

Not So Perfect World
Despite how much I just praised Megaliths, I will say if you only focus on Megaliths, the deck won't be anything special. It's not Megaliths' fault, it's the fact that Megalith Aratron can only do so much heavy lifting by itself.

I encourage you to think about the possibilities Megaliths bring because they have a lot going for them that meshes well with other decks. Block Dragon's an obvious application because they're all Earths and Rituals are inherently their own subsection, but consider their Levels as an avenue for success as well.

A small suite of monsters that are all Earth, that can Special Summon, search, and recur each other, while also being Level 4s and 8s that don't take up your Normal Summon? Best yet, cards like Megalith Portal and Megalith Aratron work with Ritual monsters, not just Megaliths. They may not be dominating the competitive scene tomorrow, but don't sleep on a deck that's so versatile.

Additionally, the entire Megalith core costs less than two dollars. With no price barrier to a full three copies of all ten cards, including Megalith Unformed from Eternity Code, means you're out of excuses!