There are a handful of themes I adore for absolutely no reason, and Shiranui are definitely one of them. Even before Shiranui Solitaire came out, I was rocking the Shiranui deck at locals and combining the theme with everything I could think of. In my opinion the best old-school Shiranui deck was a Speedroid Shiranui build I called "Zoombies", pulling out all the stops with Speedroid Menko!

But yeah. Shiranuis never saw much success on the competitive level, though they certainly have a lot of really good cards for different situations. Shiranui Solitaire and Shiranui Squire both summon Shiranui from the deck and make for easy Link and Synchro Summons, and all the Shiranui have good effects when they're banished.

Even the bad cards are pretty good! I know, it's weird to defend cards that I'm not playing, but virtually every Shiranui card has aa use in some capacity. I'm not a fan of Ghost Meets Girl a Shiranui's Story since it needs your opponent to have a monster, but hey if you want it to use it I won't stop you. The same thing goes for Shiranui Style Synthesis. It sends Zombies from your hand to the graveyard to revive Zombies or bring them back from being banished, but it's not the main entree in today's build.

I'm not trying to complain - though I'm very good at it - but getting everything I wanted in this deck was a daunting feat! I trimmed the deck down to a tight 40 cards, so if you want to add some extra flair just know you have some breathing room.

DECKID=110537 There's not a lot of new Zombie stuff coming out recently, but Structure Deck Zombie Horde introduced some key elements to the theme. I'm pulling a lot of old school favorites with the newest Zombie cards, trying to cram as much as possible into the deck.

That said, Jack-o-Bolan's the hottest new card in the Zombie arsenal, and it's definitely worth picking up. This deck puts it to work, and it's a great card to start our discussion.

Jack-o-Bolan + Zombies = Ja-bombies?
Shiranui are definitely not the most well-known theme out there. Most people are familiar with Shiranui Solitaire, an effective Lonefire Blossom for Uni-Zombie, making an easy Rank 4 play or Level 8 Synchro out of one card. With the introduction of Link Monsters it's also 1-card access to Vampire Sucker and Avendread Savior. So it may not be the most powerful card on its own, but the interaction with Uni-Zombie makes it a strong building block for this kind of strategy.

And that's nothing new; placing Zombies into the graveyard from the deck been the norm for a while, but yarding Zombies from the hand has been a greater challenge. Despite all their recursion, Zombies live and die by their Normal Summon. You'll often have plenty of good Zombies in your hand with no way to get them buried, so if your Normal Summon fails you're left with lots of good cards trapped in the wrong place.

Thankfully Zombies don't have to play Cheerful Coffin, Hand Destruction, or take chances with the Danger! monsters anymore. I can say this with tremendous confidence: Jack-o-Bolan is the best thing to happen to Zombies in a long time.

…I mean, at the very least it's the best thing since Doomking Balerdroch and Necroworld Banshee. Jack-o-Bolan is a huge breath of fresh air because it recurs and summons from the hand while dumping another card to the graveyard in the process. It's been an incredibly hot seller since day one of Ignition Assault, and that's despite the fact that it's had virtually zero success in competition. 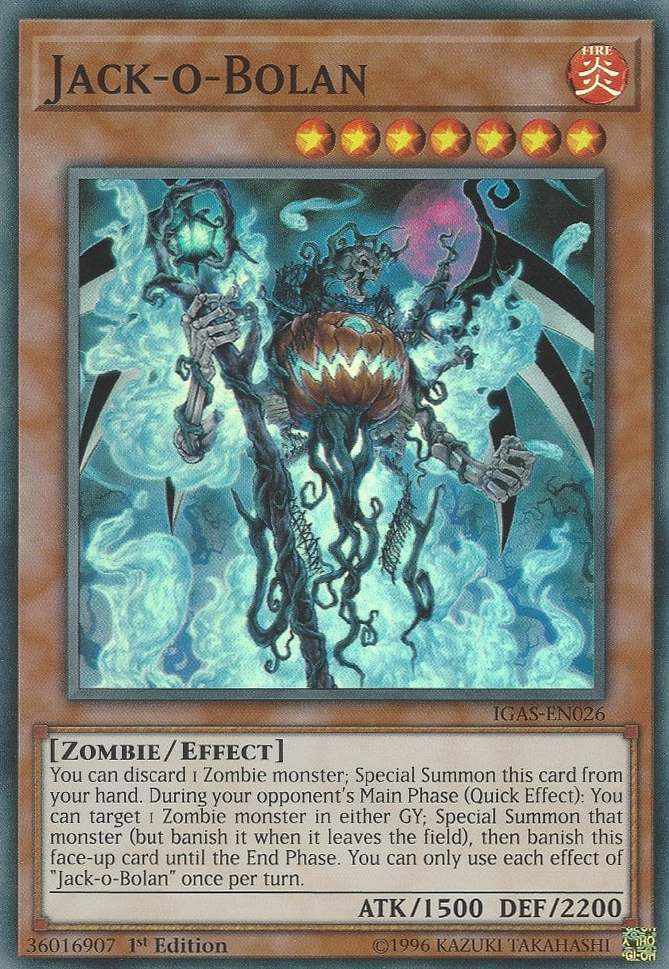 Worst case scenario, you'll drop a Zombie from your hand to the graveyard and summon a monster to fuel further plays. That's nothing revolutionary, but it's extremely important in the early game. Imagine opening with Shiranui Solitaire and Jack-o-Bolan, plus a Mezuki or Gozuki, or any other Zombie. You'll easily churn out some big Zombies, possibly draw cards from Vampire Sucker and even get your Zombie World set-up started.

But Jack-o-Bolan goes further - remember Doomking Balerdroch? Having a hard time getting it out of the graveyard? Bam, summon it back with Jack-o-Bolan. Jack blinks out of existence for later use while your Balerdroch can pop a card on the field and negate another effect if it hasn't come out already. Need more defense? Feel free to bring out Shiranui Spiritmaster for more defense and pop a card when it gets banished.

I could go on and on with all the niche applications, but consider Jack-o-Bolan with Zombie World, a card that's surprisingly easy to get to between Necroworld Banshee and Terraforming. With Zombie World on thee field Jack-o-Bolan summons from either player's graveyard! Blame me for burying the lede, but reviving boss monsters like Doomking Balerdroch is just as cool as stealing your opponent's monsters.

You can do that proactively or defensively depending on what your opponent's doing. Need to steal a monster so they can't revive it? Great. Need something with a big defense? Easy enough. Whether you're disrupting Pot of Avarice or Monster Reborn, the ability to make that kind of play-breaking move on your opponent's turn is an amazing benefit, especially when you're reviving monsters with added bonuses.

So between stealing opposing monsters, placing Zombies from your hand into the graveyard, reviving your boss monster and fielding a free monster in a pinch, what is there not to love? Best of all, it's extremely affordable right now!

Traps? In This Economy?
Traps are definitely not the most versatile cards right now, especially if they're not searchable and your deck isn't Altergeist or Frogs. That being said, Shiranuis have three amazing traps that are better than they look. Better yet, they work regardless if you opened well or opened poorly because they interact with just each other.

The two I'm maxing out on are Vendread Reorigin and Shiranui Style Swallow's Slash. If you're one of the seven people that know about Vendread Reorigin, congrats, you're in an elite club with no prize. It's certainly easy to overlook since it's a trap that requires your opponent to have a monster with a Level, but it's immediate disruption that can tribute off a lot of monsters your opponent will often start the game with in this format. Better yet, you'll get a free Token!

Worst case scenario, and I mean worst case scenario, it's defense. But factor in Shiranui Style Swallow's Slash and you have even more disruption. At the small price of that free Token, you'll pop two more cards on the field and possibly a third if you banish Shiranui Spiritmaster with Swallow's Slash's effect! Unsearchable traps may not be at the top of everyone's wish list, I get it, but that 2-card combo can get rid of four of your opponent's cards in one shot.

Sure, Vendread Reorigin locks you into summoning nothing but Vendread monsters, but I'll chalk that up as one of those drawbacks that's so small you won't notice. Remember Avendread Savior? The Link 2 with favorable arrows? Just summon that and continue on your merry way. You'll get back Vendread Reorigin to thwart your opponent even more and when you use it aggressively you'll be sending your opponent's monsters to the graveyard.

Remember Jack-o-Bolan? Its power is obviously amplified by Zombie World as we noted, and Vendread Reorigin is a segue into Zombie World via Necroworld Banshee. That seems like a pretty good worst case scenario: Vendread Reorigin popping off a monster and suddenly setting up the rest of your turns? Sign me up.

Thankfully Shiranui don't need redundant copies of everything to maximize their returns, but I'm a huge advocate for focusing on the Synchros, especially when they come out of nowhere. Shiranui Samuraisaga recycles your banished Zombies – stuff like the all-important Mezuki – and shuts down your opponent's onslaught. Meanwhile Shiranui Sogunsaga can grow to a staggering 6000 ATK for game-ending attacks.

Ultimately, Shiranui Sunsaga's probably my favorite of all the Shiranui Extra Deck monsters. Talk about recycling your Zombies and taking out threats in one go! With 3500 ATK, it's an amazing way to get over some of the biggest monsters your opponent can throw at you.

But if all your fun tricks and gimmicks aren't working out for you, you can rely on one final comeback card that's impossible to avoid. No, I'm not talking about Shiranui Style Samsara recycling your Zombies, but rather Super Polymerization. Yeah, it's not unique, but combine it with Zombie World and any of your opponent's monsters become Dragonecro Nethersoul Dragon, a wildly powerful card that functions as an incredible finisher here.

With 3000 ATK and a chance to punch in tons of extra damage, this deck lets you steal wins in spectacular ways. Even if your opponent has a full field, Super Polymerization deals with two opposing monsters in one swoop and Dragonecro Nethersoul Dragon hits hard to follow up. Attack over any monster your opponent has and Nethersoul makes a Token to hit the monster again after you reduce its ATK to 0.

Seems like a pretty good backup plan if you ask me!