If you look at the history of Magic: The Gathering, milestones weren't made alone. Players like Jay Schneider helped fine-tune the concept of the mana curve with Paul Sligh, and the concept of card advantage was developed by two friends from California.

But before we talk about the history of card advantage, we have to truly understand what the term "card advantage" means. Brian Weissman, who helped create the concept, said card advantage is one of those things that has a lot of complexity to it, but it can be explained in a simple way. 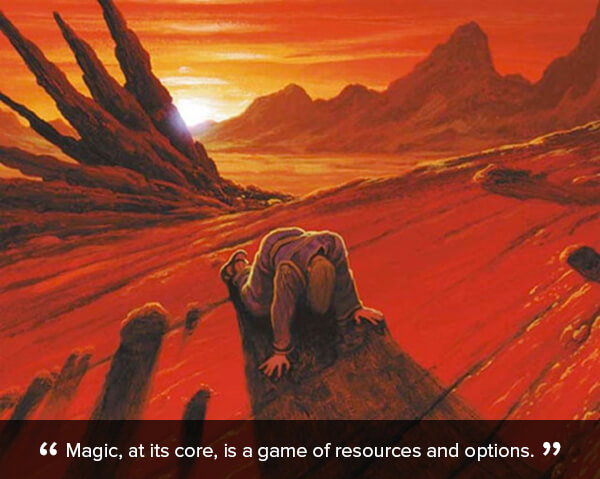 "I've probably taught 20 to 30 people to play, including my six-year-old son," Brian said. "The one thing that I've learned from observing new players is that every person wants to draw their card for the turn. Many new players will often draw for the turn without untapping.

"Fundamentally, everyone who plays Magic knows the fun and important part of playing is drawing a card. It gives you options and resources. Magic, at its core, is a game of resources and options."

"Drawing a card is always relevant. It's like taking a piece of another turn. Ancestral Recall is like three Time Walks. Jayemdae Tome is 'pay four, take an extra turn.'"

People groan when they play Fact or Fiction and flip four lands and a spell, but that's actually a good thing, Brian said.

"You just kept from wasting four turns drawing lands," he said. "Card advantage, at its core, is about more options. It's about getting more resources and taking more turns than your opponent. If you do that enough, you cement an advantage."

Long before he was a guru of card advantage, Brian Weissman was just a guy cruising around California with his buddy, Matt Wallace.

"Matt had disposable income and a car," Brian said with a laugh. "Without him, I would have been stranded in Santa Cruz."

But since they were mobile, the two friends could travel all over creation in search of Magic cards. Near San Rafael there was a game store called Gamesape.

"People always said that the owner was related to someone at Wizards of the Coast," Weissman said. "They were the only place in the Bay Area that had a steady supply of the Unlimited Edition cards. Everyone else had been sold out for weeks or months."

The owner would open a box of Unlimited every morning and put the rares in a binder and the uncommons into a box, Brian said.

"People would line up outside the store before it opened just so they could have a chance to look at the cards," he said. "Every rare was $2 and the uncommons were $1. You could get great cards for cheap, although no one could agree on what was good.

"I ended up picking up a few copies of Icy Manipulator, Mox Jet, and Demonic Tutor. I was convinced that mono-black was the place to be, but I also picked up an Ancestral Recall to trade a guy that I knew."

Deck construction was a little different back then, Brian said. The "Restricted List" was almost completely unheard of except for a few hushed whispers on a Usenet forum.

"Moxen only made mana, so there was no reason to restrict them," he said. "We had no idea how to slim down a deck. I was running six or seven Mox Jet and six or seven Demonic Tutor. That might sound overpowered, but we were also running 200 to 300 card decks, so things balanced out."

The two friends also decided early on that 20 life was just too little to play around with, Brian said.

"With 40 life, games were more dynamic and tended to be pretty different each time," he said. "As a side-effect, we discounted all of the offensive components that exited in Magic. We couldn't figure out why someone would run Savannah Lions or White Knight when they were garbage." 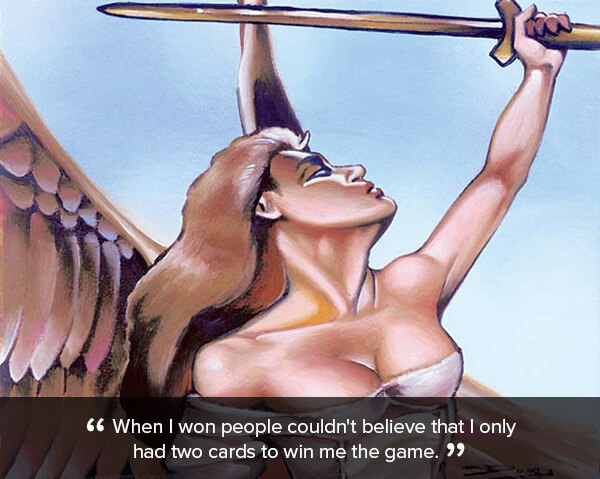 Games had Brian and Matt throwing spells at each other like it was going out of style.

"I would be generating absurd amounts of mana with my Moxen, Candelabra of Tawnos, and my Urza Lands," Brian said. "I would be using that mana to deal insane amounts of damage, but Matt would still always get ahead with cards like Braingeyser.

"He had a couple copies of Vesuvan Doppelganger, Clone, and Mahamoti Djinn. I'd just lose when they'd hit the table. It clued us in to what was going on with this whole card advantage thing."

Generating huge amounts of mana was cool, but the card advantage that Matt was producing was what really won games, Brian said. The two friends decided to put their new theory to the test. Could card advantage really win games?

"Matt and I had been playing for a couple of months and we had been talking about what card advantage meant during those months," he said. "We found out about a tournament called 'The Manafest' up in San Francisco and we decided to join. We had started to trim down decks and were observing the Restricted List.

"There were some glaring omissions to the Restricted List, though. Library of Alexandria and Mind Twist were still unrestricted."

Matt and Brian built the first version of "The Deck," which used mana sources like Mana Vault to make an opponent discard their hand with Mind Twist.

"We both wanted to play, but we only had enough cards to build one version of the deck," Brian said. "We left it up to fate and flipped a coin or rolled a die or something and Matt won.

"Matt just leveled the field up until he ran into Andrew Finch, who was the person in charge of organized play."

Finch was running a land destruction deck that was also steam-rolling players at the tournament, Brian said.

"Matt told Andrew, 'Look, we both know you're going to win, so why not let me go first?'" Brian said. "This was before the play/draw rules had been established, so Andrew let him do it.

"Matt dropped a Black Lotus and a Mana Vault and used Mind Twist to take his whole hand," Brian said. "Eventually, Mind Twist was placed on the Restricted List."

Later, in June of 1994, Matt decided to see if there was some substance to this whole Internet thing and the two friends parted ways.

"I was left on my own to work on stuff," Brian said. "I set out to figure out a way to recreate 'The Deck.' I hadn't figured out how to win without my busted cards. I felt like I was leaning on a design crutch.

"The next big tournament featured about 500 people and I debuted what I had considered to be the final version of 'The Deck.' It was the version that was running two copies of Serra Angel."

Since it was restricted, the remaining copies of Library of Alexandria were replaced with Jayemdae Tome and Mind Twist was replaced with Disrupting Scepter. It was the beginnings of the five-color control archetype, Brian said.

"The introduction of Mana Drain made your opponent's deck Turn Against them and their aggro became your aggro. I realized that you had to have defensive spells in a control deck.

"Now, we know that an entire deck of card advantage, defense, and a few win conditions goes a long way. When I won that tournament, a couple people from Wizards of the Coast interviewed me and they couldn't believe that I only had two cards to win me the game."

For the next five years, all Brian played was control, he said.

"I probably have 30,000 hours in playing control decks," he said. "It wasn't always blue, though. I played Black/White Necropotence and won California Regionals, which qualified me for the Pro Tour."

With the father of Card Advantage at the mercy of an interview, it was time to settle an age-old debate. People in forums, friend groups, and game stores often argue about what cards produce card advantage and what cards don't. Among the discussion are always Serum Visions, Think Twice, and Sleight of Hand.

It turns out that Think Twice is the only card in the three that produces card advantage, Brian said. The other two are tempo cards.

"Because Think Twice flashes back, it is the only one that produces classic card advantage," he said. "However, just because a card produces card advantage, that doesn't automatically make it better. Recurring Insight is almost unplayable and it continues to gain a card.

Those two set up your draws a little better than drawing a single card does, so they're considered tempo cards, Brian said.

"Five mana to get two cards over multiple terms may be card advantage because it replaces itself AND draws a card, but it's just not great."

So when you're deciding what to cram into a deck to produce card advantage, think about what the card does now, and in the future, Brian said. That's the best way to find a good source of card advantage.