Those who know me know that while I am a Commander fan, I don't often get to partake in many battles with 100 cards. The appeal of Commander for me is the same as the appeal for Cube: I love big, splashy creatures and effects. Speaking of which, I'm also a huge fan of Cube drafting and aside from all the awesome Commander cards that get released in the yearly Commander sets, there are also a ton of great cards for adding to Cubes.

Commander 2014 looks like it has no intention of disappointing players when it comes to all the powerful cards that are included in the set. Just like previous Commander sets, this one includes mechanics designed specifically for the multiplayer format. While last year's Commander set boasted the tempting offer ability, this year we have lieutenant as our commander keyword.

Lieutenant basically rewards us for having our commander in play, which is sweet. With a card like today's preview cards, we can even cast our Commander precombat as a sort of combat trick!

May I present you the next in a long line of blue headaches, such as AEtherling, and Simic Sky Swallower...Stormsurge Kraken! 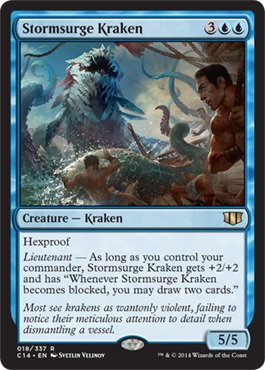 Hexproof has been one of the most frustrating abilities for your opponents since it was created. Overtly powerful creatures like Geist of Saint Traft have made incredible names for themselves in competitive Magic, and even less impressive uncommons like Invisible Stalker have proven the value of hexproof.

While these creatures have proven almost impossible to kill at times in formats like Standard, they are much easier to dispose of in multiplayer format like Commander thanks in part to both the sheer amount of relevant removal available along with a higher player count; this means the odds are higher that someone at the table will have an answer.

The other option to curb the power level somewhat is to somehow Remove the Commander before blocking, thus neutering the lieutenant ability. This would make a commander like Derevi, Empyrial Tactician perfect for the Kraken as you can put her into play at instant speed. I'm not sure how well birds and Sea Monsters get along, but being able to pay four mana to put Derevi into play at any time is big game and the kraken appreciates it.

This doesn't mean that the kraken is weak, mind you! Just that he probably won't take over your entire game singlehandedly...but he'll sure try! And besides, we're not trying to talk this guy down. Rather we're trying to cover some of his weaknesses, of which he has few.

As for his stats, today's gentleman is a huge 5/5 for five, but that's not even the end of the story. If your commander is in play Stormsurge Kraken becomes an impressive 7/7 that has virtual unblockability.

What do I mean by "virtual unblockability"? Well...look at him. Who's going to be blocking this guy? That sounds like such a miserable proposition. Not only is the creature you block with most likely passing on to the next life, but the controller of the kraken is also going to draw two cards. He reminds me of some kind of reverse Shadowmage Infiltrator in that way. But this isn't the first time we've seen this ability.

While there have been three creatures with an ability like this in Magic's history, none of them have been this large or had hexproof. Drelnoch from Coldsnap was the most recent. His ability allowing us to draw two cards is exactly on par with the Kraken. Of course for the same casting cost our subject today has +4/+4 and hexproof on the Yeti Mutant, which is pretty huge.

If we go back a little further we have both Chambered Nautilus and Saprazzan Heir from Mercadian Masques. The Nautilus let us draw one card whenever it was blocked and the Heir let us draw three cards (hence why it was rare)! But at a respective 2/2 and 1/1...who wanted to block these creatures anyway? There was basically no penalty. Sure, I'll take one or two damage or I'll shock it. The Stormsurge Kraken on the other hand, well...seven damage is a bit more and it suffers from now such direct damage weakness.

There's also the option to put something like a Lure on our kraken friend. Or use Enlarge if you're looking for something more modern. It's worth remembering however that his ability only triggers once, no matter how many creatures block it, but there are still ways we can force a block every turn or so. Besides, drawing two cards a turn is huge; let's not get greedy.

While he doesn't have any sort of "enters the battlefield" ability, I can definitely see Stormsurge Kraken fitting into any blue deck that can house him. He has awesome stats, hexproof, and an ability that says "draw cards." The only unfortunate part, for me at least, is that he doesn't fit very well into Cubes. But hey, we can't win 'em all, am I right?

Thanks for reading and I'll catch ya tomorrow with some Standard videos.