It's that time again! We're in between set releases and a brand new Commander offering is right around the corner: Commander 2015!

While I've never been a huge Commander player, I absolutely love the format for the same reason I love Cube Drafting. Both formats allow players to use powerful, heavily underutilized cards, some of which were exclusively made for Commander. I mean let's be real: what other format allows you to play a card as busted as Maelstrom Wanderer?

This being the case, Zombies are one of the bread and butter creature types of the format, from cards like Ghoulcaller Gisa, to Stitcher Geralf, to Grimgrin Corpse-Born. Whether your commander is a Zombie itself or your deck simply has numerous ways to produce Zombies, you can definitely form some pretty solid strategies around the undead. Today's card hopes to further that trend. 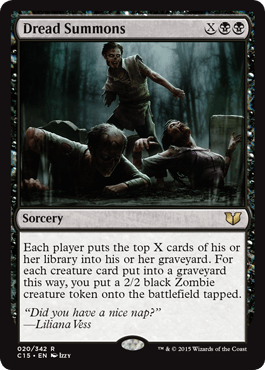 If nothing else, Dread Summons is extremely flavorful, milling each player in a game of Commander and netting you a 2/2 for each milled creature; using the opponent's dead bodies against them. Obviously this ability gets better the more players you have per game.

Recently in Magic Zombies have begun to resemble their fictional counterparts in speed as they now seem to consistently enter the battlefield tapped. Dread Summons is far from the first spell to create a massive amount of zombies, but it is definitely unique in how it accomplishes this. Being able to mass produce zombies has been a defining quality of rare and mythic black cards in recent years with several cards trying to accomplish a similar task.

The first card with a similar ability came out of Mercadian Masques in the form of Midnight Ritual (later reprinted in 10th Edition). Although, unlike Dread Summons, we needed a high number of creatures in our own graveyard to make any relevant number of zombies, in addition to the hefty casting cost of X2B. As you can imagine this card pales (pales...get it? #ZombieHumor) in comparison to our current options.

The next cards that wanted us to overwhelm our opponents with Zombies was Army of the Damned. This was an eight-mana sorcery that put a ridiculous 13 Zombies onto the battlefield (the number 13 fitting right into the unique horror trope for the Innistrad block). If you could survive, along with your Zombies, you basically won the game the turn after you cast this. And if you happened to get the card in your graveyard somehow (either by casting it or perhaps even milling it...perhaps with our own Dread Summons), we could actually cast it with flashback eventually! Innistrad would mark the first appearance of Zombies entering the battlefield tapped to represent their slow and staggering nature.

The next attempt at Zombie mass-production was in Khans of Tarkir, where we saw Empty the Pits. This reminds me most of our preview card today, but it's still uniquely different. For one, Dread Summons is much easier to cast at XBB rather than XXBBBB, despite not being able to delve. The second difference is that Empty the Pits was an instant while Dread Summons is a sorcery. This can make a pretty big difference in a format like Standard, but I think less so in Commander. I think the biggest difference, however, aside from casting cost is the following aspect...

While it is more difficult to mill players out in Commander, what with having 100-card decks and only one copy of each mill spell, it can still be done from time to time. The act becomes a little easier thanks to the frequency that players like to draw cards and cast tutors in the format. Additionally the task is made even easier when a card hits multiple players at the same time, which Dread Summons does.

Now I will assume that Dread Summons is going to primary be used a Zombie creating engine with which to Crush our opponent's with, but the card could definitely be a great addition to the milling toolbox along with cards like Fascination, Mind Grind, and Increasing Confusions.

The best part about Dread Summons is that it does mill the opponent at the same time as making Zombies. This is often a unique ability as it can sometimes Remove key cards from the opponent's deck, considering they only having access to a single copy of any given card in their entire deck and all. One interesting aspect of Dread Summons is that it mills all players at the same time. This means that, aside from creating plenty of zombies, if you can create infinite mana somehow, Dread Summons makes it very possible to mill all your opponents out of the game at the same time. Sure, they could have an Eldrazi in their deck that allows them to reshuffle, or they could somehow force you to draw a card after you pass the turn, but getting every deck to zero cards at the same time is a pretty spicy proposition.

And even if you can't make infinite mana, you could still make a good deal of Zombies in the process. In your average four-player game, a Dream Summons for five is going to cause 20 cards to hit the graveyard. That's a lot of opportunities for 2/2s.

Commander 2015 spoilers are rolling in this week, so be sure to head on over to our Facebook page and check out all the latest cards that are revealed in our Commander 2015 album. Thanks for reading guys, and I'll see you back on Thursday for the Standard action I promised yesterday in my Modern article.