I like Commander. From years writing about the format at MagicTheGathering.com to a few more years playing it out with opponents from around the world, Commander has been one of my all-consuming passions in life.

And each October has become a holiday of previews.

I love Commander, and I'm always happy seeing new cards and support for the format straight from Wizards. But being happy and being impressed and different things, and each year that Commander releases feel more and more it's just okay.

Commander 2016 is another Commander release. There are some cards, some commanders (like our new Phyrexian overlord) and some decks that can get you started playing instantly. It's all fine.

And the mechanics are just… okay. I guess.

Commander 2013 didn't have strong mechanics. Stuff like Djinn of Infinite Deceits and Homeward Path were generic "cares about multiplayer" things, and a "tempting offer" often wasn't. They all sat on the sidelines to flashy, powerful leaders like the obnoxious Derevi, Empyrial Tactician and the chase-cards-for-Legacy-just-in-time-for-a-Legacy-Grand-Prix True-Name Nemesis and Toxic Deluge.

Commander 2014 went the mono-color route, giving us Planeswalkers that could also be your commander (contentious and often unfun to play against even to this day), "lieutenant" to encourage linear decks, Myriad Landscape that doesn't work with Wastes (Something I still get wrong.), and Containment Priest to remind us Legacy is a format these releases also support (though the early-run-on-the-first-print-run lessons from the 2013 release were applied well).

Commander 2015 was back to multicolor decks, and now packed with multiple mechanics. "Experience counters" were, again, linear build-around-this-one-thing ideas that encouraged very specific decks, and arguably the best of the five commanders didn't really care about the experience counters at all. "Myriad" was a narrow way to punish opponents without blockers, though Blade of Selves admittedly showed the door to cool things. "The Confluences" were just more of things we've seen before with a little twist.

That brings us to Commander 2016. It feels like things are cool, but still safe and ordinary. The set is all about four-color commanders, and the only reason it's all about that is because we don't have them yet. It's fan service to make them, catering to the audience looking for exactly the things we don't have.

I wasn't among those asking.

Let's be clear: Plenty were asking, and I'm happy to see how R&D iterated repeatedly to end up with something more thoughtful than the randomness of Nephilim. Atraxa, Praetors' Voice feels like something unique. It's got the vibe of H. R. Giger with mechanics that pile up into a Phyrexian power. Proliferate is such a uniquely Phyrexian mechanic that nostalgia says it's fine—and suitable for the "growth" concept they set for four-colors-not-red. 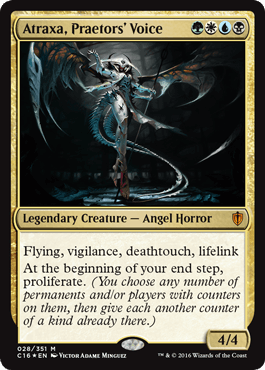 But it's also just four colors and way too many keywords. There's a danger in cool things, and Commander is already a difficult format to get into. If you play Standard and try to build a three- or four-color Commander deck you'll quickly run into card quality issues. To build a deck that feels "good" you need a deep variety of cards. Buying a Commander 2016 deck whole cloth is a fine start, but Magic decks have always been a personal expression: Preconstructed decks are never as satisfying as building your own thing.

Commander 2016 needed to have more though, appealing to a variety of Commander players: Four-color wonders alone wouldn't be enough.

Which leads to another major mechanic in the set: partner, or "what people who don't want to build a four-color deck are getting."

@the_stybs What people who don't want to build a 4-color deck are getting. 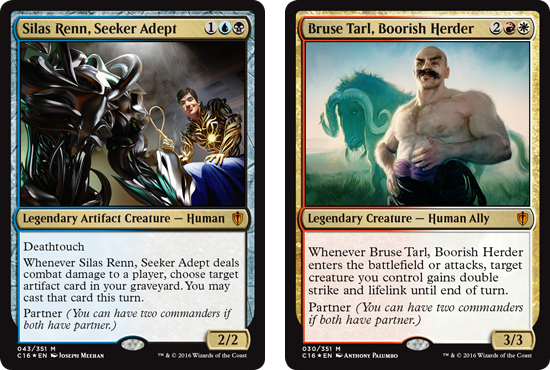 I love partner. Unlike four-color, which feels both forced (It is!) and limited (it is since only five four-color commanders will exist!), using partner opens up all sorts of personal choices. As Mark Rosewater pointed out in his design article:

Yes, two-color color pairs can be redundant. If you choose two commanders with the same two colors it's "just" a two-color Commander deck. But that's the point! You wanted two colors and now you get two choices of leader for it. If you want to try splashing a third color in that deck it's an easy swap of one commander for another, regardless if it's a wedge or shard you're trying out. That flexibility is mostly upside—neither Kraum, Ludevic's Opus nor Sidar Kondo of Jamuraa are the most threatening choice of commander—but it's one that's up to you and you get to explore.

Partner makes you get personal despite the fact that individual commanders with partner aren't particularly powerful in comparison to other two-color commanders.

"Commanderbands with another Commanderbanding Legend" won't excite some because it breaks Commander's "just one commander for your deck" rule, and it isn't backwards compatible.

@RogueArtificer I'm happy with partner as it is. "Commanderbands with other Legends" seems rough on design for avoiding busted duos.

But it's brilliant to keep it from being backwards compatible: things don't get broken. Even better, it's not as limiting as it appears.

You don't need the past since the present and future are wide open opportunity. 105 commander pairs is more variety than all of the previous Commander releases combined. 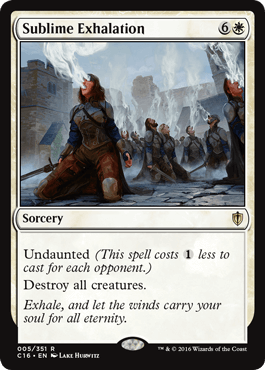 Undaunted is the obligatory "multiplayer matters" mechanic, and it's actually clever.

One of my biggest issues with most multiplayer mechanics is they don't scale well, and they often reward you more if you're ahead than behind. Tempting everyone else with lands isn't cool if you're already behind. Mana-Charged Dragon rarely got through to the player already far ahead on life, cards and answers even if the entire table pitched in to help. Goad, from Conspiracy: Take the Crown, is great for pulling away a lonesome blocker trying to hold the fort for the manascrewed player rather than picking apart the leader.

Undaunted flips that dynamic… to an extent. By scaling with raw players it naturally gets worse as the game winds down. Going from Wrath of God costing four mana to six mana is a noticeable shift, even assuming you have more lands along the route to players getting knocked out. Primeval Protector doesn't have undaunted on it, but the design of checking to see if you're behind and giving you an appropriate discount is the same—it's counting creatures for each opponent, so the more opponents the (likelier) merrier.

Undaunted will keep cards far away from Legacy and Vintage, and delight anyone that needs something for a generic Commander deck. It's hard to evaluate what "the average mana cost" of these cards will be, but a healthy discount when you're behind and an added tax when you're not is the right direction for the format. The rich shouldn't get richer.

The return of basic landcycling on new cards is a reasonable solution for four-color decks, I guess. It's a clever way to support including basic lands in a deck that most sane deck builders would skip for two-or-more color dual lands, but that's not even what Wizards entirely did. Ethan Fleischer's design article shared this gem:

"We knew that four-color decks presented a special challenge for getting access to all of your colors of mana, so we spent some time identifying rare dual lands that we didn't think we'd want to put into booster packs in the near future. We put a few of those cards into the Commander 2016 decks to help the decks run smoothly."

If these lands are things like pain lands, filter lands, or enemy fetch lands (please, no) you can expect a run on the decks as the MSRP won't be anywhere near the actual "value" of these lands.

So, logically, they won't be.

Things like enemy versions of the "original" filter lands might be new and interesting (and underpowered so therefore not chase cards), but it's more likely to be reprints of things like Battle duals and buddy lands from Innistrad and Core Sets—particularly the buddy lands from Innistrad. We just got enemy fast lands that will be in Standard for the next two years so a Commander release is an excellent slot to get them into player hands, provide "value" to the players that care about that sort of thing, and ensure that enemy Battle duals will be received well when they arrive in Standard to replace them.

Any yet longtime Commander players already have their copies already, making these unexciting.

So we have rare dual lands anyway and a mechanic that cares about a variety of basic lands. While it's possible for these two to mesh well, the basic landcycling cards themselves don't look as exciting as they could be: 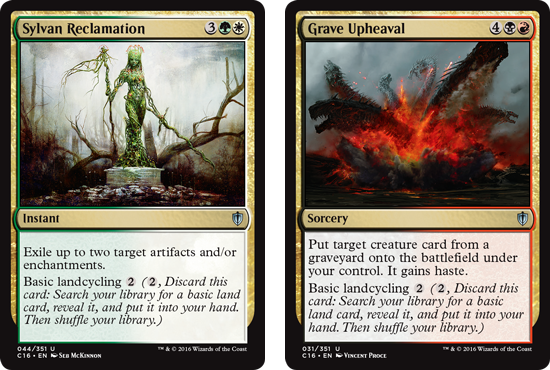 Sylvan Reclamation is Return to Dust as an always-instant and additional mana in cost and extra color of mana on top of that. Grave Upheaval is Rise from the Grave with red added to give haste. While that risks sounding like the "cards need to be more powerful all the time' argument, this is a place where Beacon of Unrest, Time Stretch and other big spells already exist. These cards are great role-filling effects that smooth out an early game's mana, but there's little exciting about them. If it costs six mana and two colors, why can't it be an instant so it's a great combat trick too? If it's five mana and two colors, why can't it exile three obnoxious things?

While I suspect these weren't pushed in order to avoid the feel bad of discarding an exciting card just to find a land, it also means they aren't satisfying to longtime Commander players either. Being two colors each excludes mono-colored decks, where things that fetch up basic lands can be exciting and hard to find. (See Gauntlet of Power, Cabal Coffers or Emeria, the Sky Ruin for more details.)

Basic landcycling on unexciting cards in addition to adding rare dual lands feels like a kludge: It solves some of the four-color problems without offering a ton of excitement for established players. If you aren't new and you aren't interested in four-color Commander…

@the_stybs What people who don't want to build a 4-color deck are getting.

I don't know what to tell you. It's Commander 2016. For new players to Commander and anyone that hasn't taken the format seriously before, it's pretty awesome. For the rest of us, it'll be okay.

I'm okay with that.

But I'd love to see something more.