If you're not familiar with Nekroz you might want to consider yourself lucky for having missed early 2015 when the deck was absolutely everywhere, ravaging the competitive scene. Back then it seemed like Nekroz could do no wrong, winning games almost before they started. After all, Djinn Releaser of Rituals is currently Forbidden because Nekroz made Ritual Summoning so easy, and locking your opponent out of their Special Summons is a tad unfair in just about everyone's opinion.

Nekroz decks are weird because nearly every card falls into the same category – each card has an effect that searches or recurs other cards to build consistency and help you get set up, as well as another ability that becomes more important once everything's in motion. Take Nekroz of Brionac for example - it searches your deck for Ritual Monsters, but it also deals with Extra Deck monsters on the field. Even Manju of the Ten Thousand Hands and the Nekroz Ritual Spell cards fill a similar role, with their aggression being as important to your success as their search power.

Heck, even the Impcantations mirror that sort of functionality. They'll hit the field from the hand for free and bring along another Impcantation from the deck, and though searching your deck is their primary goal, having an extra monster on the field for Ritual Summons isn't exactly bad, especially when that extra card economy is free.

We haven't seen Nekroz top any Championships recently, but the format's still young and Regional tops are starting to happen. The cards are pretty affordable right now, and the win condition's really attractive: this deck usually reaches victory by shutting your opponent off from their Extra Deck effects with Nekroz of Unicore, then amassing a giant army of Nekroz monsters to take your opponent down. I have no doubt we'll see Nekroz in larger numbers over time, especially since they wipe the floor with Link spam decks.

Here's an example of a recent build with some new innovations that Top 8'd a Regional last week. It wound up in 2nd Place after an additional Top 4 playoff that was held after the main event.

DECKID=110557 I'll get more into the specifics later, but just remember how incredibly good the deck is at searching cards, reusing them, and reliably assembling plays; a lone Manju of the Ten Thousand Hands searches Nekroz of Clausolas, which searches Nekroz Kaleidescope, which can send Herald of the Arc Light from your Extra Deck to the graveyard to search another Ritual card. This deck's extremely layered with back-up plan after back-up plan. Lots of decks are either flexible or reliable due to redundancy, but this deck manages both. That's a rare thing.

"First Or Second?" "Yes"
What's interesting about Nekroz is that the deck isn't geared to just go first or second; it doesn't need to win the dice roll to be competitive. Ultimately, it'd be smooth sailing if you could summon Nekroz of Trishula and Nekroz of Valkyrus consistently without batting an eye, and win with consistent beatdown. Sadly, you'll have to try a bit harder than that in most games.

Nekroz of Unicore and Archlord Kristya are the glue that hold your opening strategy together, dealing with threats both actively and reactively over the course of the entire game. I don't think the deck would see much success without those two cards shutting down Extra Deck monsters and stopping Special Summons respectively.

Thankfully you have tons of search cards to get there. Starting with an Impcantation and a proper mirrored card or Manju of the Ten Thousand Hands, Nekroz of Unicore is easily accessible. Double down with Nekroz Kaleidoscope and it's even easier to field Nekroz of Unicore backed by Nerkoz of Valkyrus and Nekroz of Trishula - both protect your Unicore from targeted effects and battle.

That's a pretty good move going first, but keep in mind that Nekroz of Unicore shuts down monsters on the field regardless of who made it there first, so if you catch your opponent off guard it might not matter how many negates they have. Take that, dice roll! 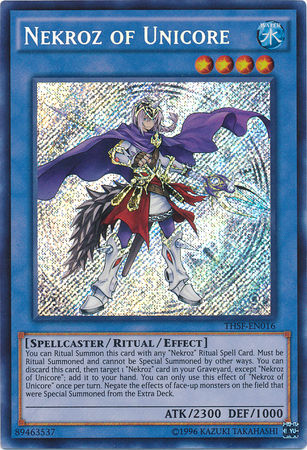 Sadly Kristya's a bit less versatile; it's not as useful when you're going secoond. You can search Kristya when you tribute Cyber Angel Benten, which is extremely easy to pluck from your deck, but it shuts off your Special Summons as well and it can't be saved with Nekroz of Trishula when your opponent targets it. That's not ideal, but if your opponent plays something that relies on Special Summoning during your turn it's still a good counter.

Since most of your deck functions as either a search card, a way to bait negations, or something with a proactive effect, consider Nekroz of Brionac: it's great to pitch because it searches so many powerful cards, but when you're going second your opponent might fall for your bait, letting you land free Nekroz monsters in the graveyard for Nekroz Cycle or Nekroz Mirror. If they don't stop it, Brionac spins back two monsters on the field for no cost!

Similarly, Nekroz of Clausolas fills both aggressive and defensive roles. Going first it'll ensure that you'll see a Nekroz Ritual Spell, but going second it could spell ruin for one of your opponent's Extra Deck monsters! Preparation of Rites, Impcantation Candoll, Reinforcement of the Army, Gale Dogra… a lot of your cards effectively act as a stand-in getting you to specific cards that let you search, draw out negation, or assemble aggressive plays.

Let's just say it's really funny when your opponent wastes their negations on your smaller monsters, and then, backed by Cross-Sheep and Danger monsters, you cycle through your deck for better cards and hit back even harder.

Not Quite A Free Win
Aside from Droll & Lock Bird, this deck's biggest weakness is its focus on searching for Nekroz of Unicore and moving on from there. Because the Impcantations stop you from dipping into your Extra Deck, you won't have that as a backup plan very often unless you methodically clear your Impcanatations one by one, leveraging your Ritual Summons and Impcantation Inception.

Additionally, timing the right cards to bait negations at the right moment can be tremendously difficult and depending on the situation, you could easily paint yourself into a corner. Because the Nekroz Ritual Spells need a clear field to banish and search more cards, leaving stray Impcantations on the field and draining your hand of Ritual Spells might see you passing while your opponent is free to wreak havoc.

Decks where you can control the narrative are definitely the best match-ups for Nekroz; brittle, straightforward strategies are your favorite even if they have a high power ceiling. Salamangreats are a good example - while they're just as consistent as Nekroz, it's easy to force your opponent to activate theeir Salamangreat traps so you can finish with Nekroz of Unicore and stop them from getting back into the game.

In fact, most Game 1s could be a cakewalk for Nekroz if you're sitting pretty behind Nekroz of Unicore or Archlord Kristya, especially if your opponent doesn't have any strong monsters or Main Deck removal. If your opponent relies on their Extra Deck to control the board they could be entirely out of luck. In the finals of that Top 4 playoff at the Regional where this deck was played, Dragonmaids proved difficult for Nekroz of Unicore since Dragonmaid Ernus can simply run Unicore over in battle. But for the most part you should be fine as long as you finish with Nekroz of Valkyrus and Nekroz of Trishula close at hand.

That said, some decks are lethal to this strategy, namely decks that pack a lot of backrow traps and go first. Altergeist and Frogs have both been successful in this format, and while neither deck has an endless supply of negations they both wield plenty of recursion and spot removal. Any trap-heavy deck has the potential to just set all their traps early and make Nekroz of Trishula useless, since your opponent needs to have a card in hand for Trishula to bring the pain.

Can you protect Nekroz of Unicore from your opponent's onslaught? That'll be the key to success in a majority of your games, as you strive to lock your opponent out of their most important monster effects.

Luck + Skill = A Good Day
While Nekroz might be a straightforward deck on a broad level, it's very hard to win by getting lucky, and the deck demands considerable skill. The insane number of times you have to search your deck with once-per-turn effects while you track how many of each card is where, isn't just something you can stumble through. For example, playing two copies of Nekroz of Trishula is a very calculated move: the first one will probably be used to stop a targeting effect and you'll summon the second from your hand, but burning through both of them means you'll have fewer options when you're searching with Nekroz of Brionac. All the search cards in the world won't help you if there's nothing left to search.

Can the deck succeed at a higher level of competition? I have no doubt in my mind that it can, largely because it can set up such unbeatable fields with Nekroz of Unicore. But the deck's fragile and you need to be methodical in the way you run it. You'll often have to play the long game in match-ups like Dragon Link and Salamangreats, baiting negations one by one so you can eventually make a value play with Nekroz of Trishula and banish key cards your opponent needs to win.

Thankfully the deck's relatively cheap to play, so I think we'll see a spike in competitive showings now that there's a proven deck list making the rounds. It's really fun to play this thing because the deck searches its most important cards so easily; it's not like you'll lose a beaucoup of games because you just fail to see the cards you need. In fact, the only cards you can't search are de facto search cards themselves, stuff like Danger! Nessie! and Reinforcement of the Army.

Not exactly a problem!

Even if you're not drawn to Nekroz yourself, you have to respect the deck and know how to beat it. Sure, lots of Nekroz players will run different cards, perhaps substituting Vanity's Ruler over Archlord Kristya or playing Nekroz of Gungnir. But having a way to take down Nekroz of Unicore, and knowing that it's the real problem in the first place, is paramount to your success.

Thanks to the power and difficulty of the deck, you could honestly be playing Nekroz at any level of tournament. Whether you're going for your invite at a Regional Qualifier event or aiming for Top 32 at a YCS, this deck has the potential to get you there!