The new Witchcrafter monster in Ignition Assault might have sailed under the radar for some duelists, but dedicated Witchcrafter players were celebrating its release last month.

Witchcrafter Genni is a fantastic new monster for the theme, and it's not even the last piece of support that's coming for Witchcrafters this year. Two more Witchcrafter cards are on their way in Eternity Code, including a new spell and a new trap.

So what's the outlook for Witchcrafter's today? Pretty good, actually! The deck isn't sweeping up Regionals, but Matt Thompson's recent Top 8 in Honolulu Hawaii is a sign that Witchcrafters are finally ready for serious competitive play. Check out the deck he took to the Top Cut.

DECKID=428611 Witchcrafter boss monsters are incredibly good. There have been, and are today, plenty of themes and strategies that are carried competitively by their boss monsters. Dinosaurs are a good example; they hang their prehistoric hats on Ultimate Conductor Tyranno because its game-ending power is so reliable, so consistent, and incredibly effective against popular strategies.

Summoning any given Witchcrafter isn't much of a challenge: Witchcrafter Pittore, Witchcrafter Schmietta and Genni can each Summon any other Witchcrafter from the deck. Thompson ran three copies each of Pittore and Schmietta, plus two copies of Genni which brought his total number of Normal Summons to eight. That's important, because the Witchcrafter theme has very few ways to actually boost its summoning power. Witchcrafter Holiday's typically the only way to rapidly build field presence. Keeping the Normal Summon count down helped Thompson avoid hands full of monsters he couldn't play.

Witchcrafter Haine's Quick Effect makes short work of face-up cards, breaking up plays and chipping away at your opponent's card advantage. It's a little more important than Madame Verre thanks in part to its ability to protect other Spellcasters from targeting effects (Thompson played two copies for that reason). Thompson could rely on Bystreet and Haine to protect his set-up and his Life Points with little upkeep or maintenance on his part.

Still, some targeting effects might hit Haine or another monster before Haine is summoned. In those cases Thompson could activate Witchcrafter Golem Aruru to suddenly put an extra 2800 ATK on the board and either bounce an opponent's card, or recycle a Witchcrafter Spell immediately.

Witchcrafter Genni Makes The Witchcrafter Engine So Much Better
Witchcrafter Pittore, Schmietta, and Genni are more than just Quick Effect Special Summons for other Witchcrafters; each of them has a graveyard-activated effect that helps keep the engine flowing. Thompson could banish Pittore to draw and discard a Witchcrafter card, and banishing Schmietta let him send a Witchcrafter card from the deck to the graveyard. The extra draw power was certainly appreciated, though Witchcrafters have their own card economy gimmicks. A discarded Witchcrafter spell would probably land back in Thompson's hand again during the End Phase. 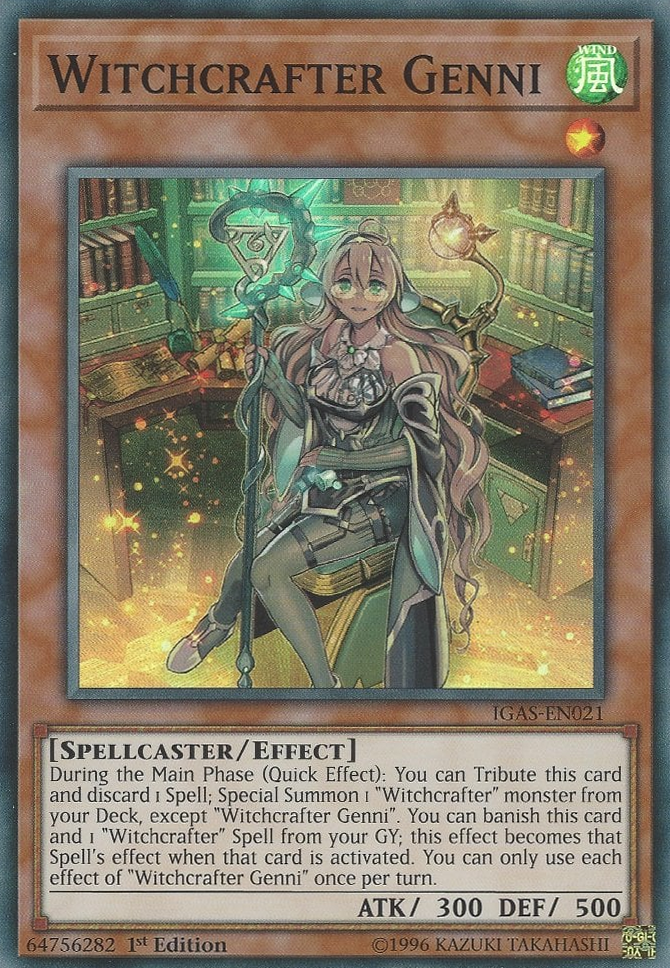 The downside to banishing a Witchcrafter spell is obvious: its own recycling effect won't activate in the End Phase. But Genni's effect wouldn't stop Thompson from adding a copied Witchcrafter spell from his graveyard to his hand, provided he had another copy to get back.

Tech Choices Prioritize Spells
Unsurprisingly, the costs to activate Witchcrafter monster effects dictate some aspects of your average Witchcrafter deck. Thompson's build was no exception, and his robust line-up of Witchcrafter spells was complimented by a handful of tech choices, including the new Lightning Storm.

Pushing past opposing set-ups with power spells was Thompson's only hope if he couldn't stop them with a hand trap. The Witchcrafter theme doesn't have enough summoning power to break through a disruption-heavy board, but mass removal and unchainable removal like Super Polymerization helped him break up entrenched boards whenever he had to play first or had a slow start.

I honestly didn't think I'd see anyone playing Book of Moon this format, or at least not three copies. The card's move to Unlimited status after spending years on the Limited List was, I thought, a sign that its time was over; nobody was playing a -1 of card economy when there were so many alternatives, and certainly not while Link Monsters were so common.

But, here we are looking at Thompson's list where he played three copies of Book in his Main Deck. Again, spell tech choices are decidedly the best picks for a strategy that needs at least a couple of spells in its opening hand to do anything meaningful. Thompson could use Book of Moon for any number of purposes, including flipping his own Madame Verre face-down to dodge effect negation.

Pot of Extravagance is seeing an absolutely insane amount of play right now in rogue strategies as players trade Extra Deck-heavy themes for decks packing Super Polymerization. Resolving Extravagance meant Thompson couldn't activate Witchcrafter Pittore's graveyard effect later in the same turn, but it wasn't a big loss, and Pittore would be there on the next turn anyways.

It's an understandably important boost in early game card economy for a deck that desperately needs the help, and you can discard additional copies to feed Witchcrafter effects. In fact, that's an important point about every spell in Thompson's deck. Redundancy can be mitigated, at least to some extent, by turning extra copies of one-per-turn spells into fodder for Witchcrafters. 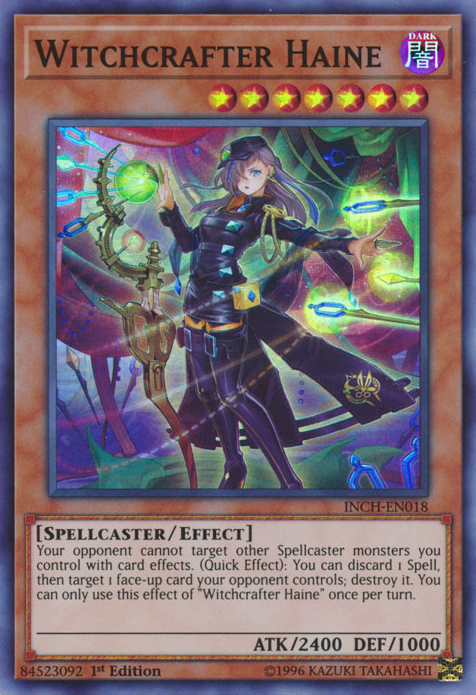 The lack of Magicians' Souls in Thompson's build is another big surprise, although given its current price tag I can imagine at least one reason why he might not have played it. Magicians' Souls is reasonably effective at yarding specific Witchcrafters and occasionally drawing cards by sending Witchcrafter Scroll and Witchcrafter Bystreet to the graveyard, but it's not a must-play for a few reasons.

First, the deck already has plenty of ways to either load its boss monsters to the graveyard, or summon them from the deck; and second, Souls' draw effect conflicts again with Pot of Extravagance. Ultimately I think Thompson simply preferred resolving Extravagance consistently instead of Souls, and that's why he played the draw spell over the new Dark Magician support.

Witchcrafters have two insane cards coming up in Eternity Code in a few months, and I could see them topping even more Regionals between now and then. If recent Top 8 results have proven anything it's that Pot of Extravagance and Super Polymerization have made dozens of rogue strategies viable for serious competitive play, although without a YCS to point to it's hard to gauge what the most popular decks of the format even are.

SPYRALs and Altergeists are probably at the top, but what's the third or fourth biggest deck in North America or Europe right now? Orcusts? Dinosaurs? Time Thiefs? This format's still wide open, and there's plenty of room for more Witchcrafter Top 8s.