I know some of you are just going to scroll down to the preview card, because that's just what you do (you vultures). But for those of you who are actually going to read the article, or for those of you that might not even know what Conspiracy is, well, first things first.What is Conspiracy?

If you're not up on drafting, or following non-Standard sets, that's probably your first question. Well, the dictionary defines a conspiracy as follows:

1. the act of conspiring.2. an evil, unlawful, treacherous, or surreptitious plan formulated in secret by two or more persons; plot.3. a combination of persons for a secret, unlawful, or evil purpose: He joined the conspiracy to overthrow the government.4. Law. an agreement by two or more persons to commit a crime, fraud, or other wrongful act.5. any concurrence in action; combination in bringing about a given result.

Well...that certainly sounds negative. So let's try to be a little more positive about what the Magic Conspiracy is.

Basically, Conspiracy is the "fun" expansion this year, filling the role that things like Commander, Planechase, Unhinged etc. have filled in the past. Conspiracy has been packed to the brim with depth in the form of all kinds of rules variations to the Draft format, including cards that make you reveal themselves in the draft, cards that are played in the command zone, cards played face down, cards traded within the draft, cards that add additional packs to the Draft, cards th...well, you get the idea. The point is that I've never been so excited to draft a format than I have been for Conspiracy. Okay, that's all good and great. But how do we play it?

...or at least that's how the set looks so far.

Like traditional drafting, you grab eight players - or yourself and seven friends - and you each grab three Conspiracy packs. You sit down at a table, and you each open one pack. You take one card from that pack, then you pass the rest of the card to your left. You will use the card you chose to build your deck from at the end of the Draft. Once every card has been taken from the first pack, you will then open the second pack, take a card from it, and pass it to the right until all cards are taken. Finally, the third pack is the same, only we pass the cards back to the left again.

Unlike traditional drafts, however, the games aren't going to be played one-on-one. No sir. This is where things get a little crazy. The eight person draft pod is broken into two groups of four players, and then you play a four player free-for-all.

Awesome, right? Conspiracy basically feels like the Commander version of Limited. It even has cards that utilize the "command zone": a zone that is rarely referenced outside of the Commander format and planeswalker emblems.

Yet there are multiple card types in Conspiracy that now start the game in the command zone. Cards like today's preview card for example. Check out Iterative Analysis! 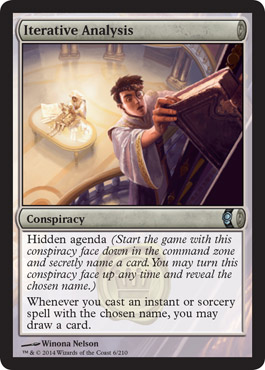 Yes, Iterative Analysis is a card with the hidden agenda ability. But what does that really mean? Let's take a look at what rules manager Matt Tabak had to say about it in his article about the mechanics of Conspiracy:

"These conspiracies have you secretly name a card before the game begins. Perhaps the easiest way to do this is write the name on a piece of paper and keep it with the face-down conspiracy. Hopefully, you can name a card you've drafted multiples of. Any time you have priority during the game, you can turn the conspiracy face up and reveal the chosen name and what bonus the conspiracy gives cards with that name. Imagine the looks on your opponents' faces when they discover your creatures actually have haste or... um, other secret abilities."

Yeah, I'm going to let that soak in, because the benefits of the card are very subtle, but very good.

So Iterative Analysis tells us that we secretly name a card - we write it on a sheet of paper and conceal it underneath Iterative Analysis until we're ready to reveal both. It is a hidden agenda, after all. Let's say we name a card like Doom Blade. Let's hypothetically say that Doom Blade is in Conspiracy and that we ended up drafting two of them.

Without costing us a card, and without actually taking up a slot in our deck, we are able to name Doom Blade and it now has the following text: 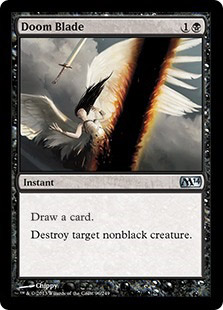 (Okay, the text would be slightly different, since the spell doesn't actually have to resolve for us to draw a card, it just has to be cast, but you get the point.)

I was a little put off by Iterative Analysis at first, because I didn't want to devote an entire card just to drawing a card on the off chance I happened to draw and cast the named spell; I mean heck, I might never even draw it! But you're not actually devoting an entire card to it. There is no risk of you ever drawing Iterative Analysis and having it clog up your hand because it doesn't go into your deck. There is no risk of losing any card advantage by playing it. All it ends up doing is sitting on the sidelines until you need it, and turning a specific instant or sorcery into a cantrip.

Can you imagine how good this would be if you could simply go through any draft deck you've had, pick an instant or sorcery, then add "draw a card" to the text? How much better would that card get? What if you had multiples?

In fact, if you end up picking this early enough, you could actually just draft around it. We have more spoilers to go before we know all of the ins and outs of Conspiracy, but there have to be a ton of decent instants and sorceries that would be worlds greater if they let you draw a card. Doesn't every Limited format have cards that were so close to good, yet if they simply did a little bit more they would be all-stars? Iterative Analysis allows those cards to shine by simply tacking on the text "draw a card." But honesty, what card isn't made better by this text?

Another benefit of Iterative Analysis is that you don't have to wait to draw it, like some combo piece or something. You simply start the game with it and when you need it - bam - there it is, waiting the entire time.

The last point I'll make is that you don't even have to compromise and use it on your "almost good enough" spells. You can actually draft a couple bomb instants and sorceries, name them with Iterative Analysis, and make them even better. There's no limit as to which cards you can name other than that they have to be instants or sorceries. Other than that, go nuts!

Hopefully you guys are looking forward to this set as much as I am. It's kind of like a completely different game than drafting Magic, but it still is Magic, so it's kind of a win/win. I look forward to hearing what you guys think about the card in the comments. I was initially underwhelmed by Iterative Analysis, but the more I kept thinking about it, I realized it was basically all upside!

Thanks for reading and I'll catch you guys next week!