"It was a question of 'finding the Kaladesh' and writing a concept that grounded them in invention. How would a Kaladesh machine incorporate an opal to charge it? Why would someone 'invent' a crypt, especially one that uses what is, on Kaladesh, a fairly obscure power source? Answering those questions visually was part of the fun and challenge of working on this Masterpiece Series."

Writing art descriptions for Magic cards is already an exercise in extreme creativity. For Kelly Digges and team, the Masterpiece Series: Kaladesh Inventions were on a whole different level. 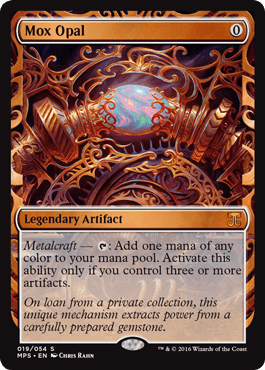 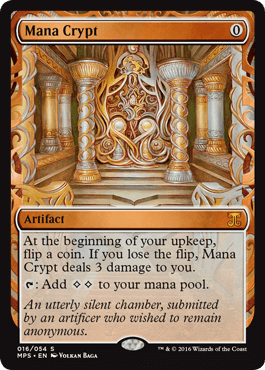 "In the end, we're bound by what's on the plane." Digges said. "Getting to include Kor Haven in Zendikar Expeditions was a lucky quirk of kor being present on both Rath and Zendikar. There are no goblins shuffling around Innistrad and no Phyrexian germ-weapons walking the streets of Kaladesh, so [some cards won't] get through. (Don't hold your breath for Sensei's Divining Top, either.)"

"Some of these were easy; Hangarback Walker was already set on Kaladesh in Magic Origins; Aether Vial, Cloudstone Curio, Lightning Greaves and others were easy slam dunks. But there were certainly stretches too, and those were some of the most fun to solve. We didn't want to kick out cool cards that people would love to see get the Masterpiece treatment, so we found fun ways to fit them into Kaladesh. Solemn Simulacrum and Painter's Servant, for example, have unusual creature types for Kaladesh artifact creatures, most of which are Constructs. We addressed this by giving Solemn Simulacrum a much more closed-off, plated look than the Constructs and assigning Painter's Servant the somewhat whimsical job of scaring birds away from murals." 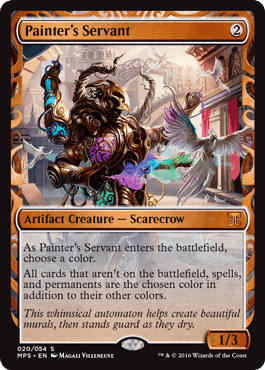 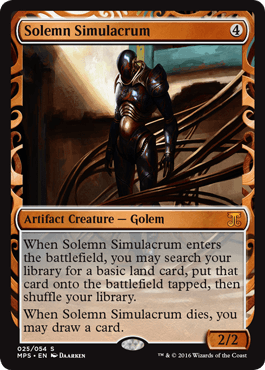 With all of these flavorful limitations in place, deciding on what gets "the Masterpiece treatment" was a difficult task. "In the spirit of including cards if we could, we decided that the compound English noun 'Brighthearth' could refer to any bright hearth. This is part of the balancing act of Masterpieces."

Choosing is exactly as Kelly put it: a balancing act of mechanics and flavor. So how did one go about the arduous task of writing art descriptions for these flavorful reprints? "It's all about the Kaladesh world guide," explained Kelly. "We sent it to the artists who were working on Masterpieces and stressed that these are reprints set on Kaladesh. The results are often quite singular—appropriate for newly invented wonders being unveiled at the Fair—but to us they still feel grounded in the Kaladesh aesthetic."

Complicating the need to nail Kaladesh's visual aesthetic was the fact that many of the Masterpieces are reprints of cards that already featured iconic art—art that players recognize and expect reprints to pay homage to. 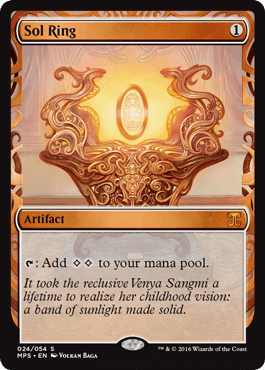 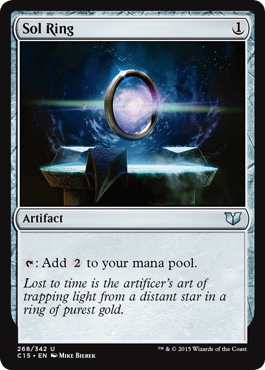 "Whenever we make new art for a card, we face the decision of whether to pay homage to the original or deliberately strike out in a very different direction," Digges explained. "There are a few intentional echoes here and there among the Masterpieces (some requested by us, others developed by the artists). Some of that comes down to the card's name and mechanic and how they impact the concept. [For example] Solemn Simulacrum is literally a sad robot, and there are only so many compositions that express that."

"In general, we want the new art to be its own beautiful thing. We didn't want Cloudstone Curio or Painter's Servant to feel like Kaladesh-painted versions of the originals. We wanted to see something new and incredible, and that's what we got." 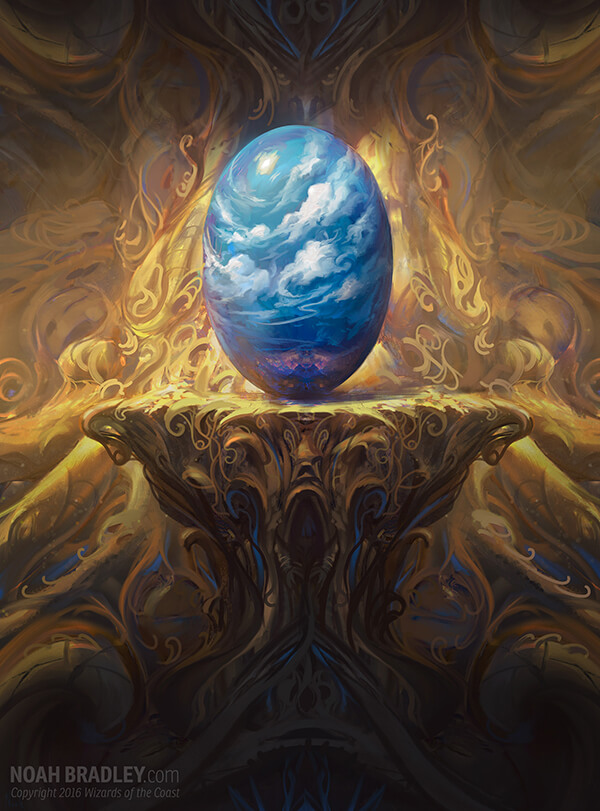 "The thought process is similar to what we do for other high-profile cards like Planeswalkers. [A]rt director Cynthia Sheppard worked hard to find artists who would be a good fit for the tone and aesthetic. The Inventors' Fair has a similar feel to a gallery in many ways. Masterpieces are high-profile pieces that need that extra pop, and we picked artists we knew could knock it out of the park."

Paired with many of these masterful pieces of art are lines of flavor text written by, as Digges put it, "a guerrilla squad of in-house writing talent" whose job was to create text that made series together feel both immersive and cohesive.

"The instruction to the writers was always that this flavor text should feel in-world, like something you might reasonably read or hear at the Inventors' Fair," Digges said. "Even within that idiom, we did a lot of work to figure out what sort of tone and information we wanted, and that was largely an organic process."

"Were they breathless sales pitches, dry museum placards, or something in between? Were they more about the objects, or about the inventors who submitted them? In the end, we tried to keep the tone informative and only a bit wonder-struck, and we focused on a mix of the inventors and the inventions. The positive response to the flavor text has been really gratifying. We weren't sure, as we were working, how important an element it would be, but we've gotten a lot of feedback that it really ties the whole package together." 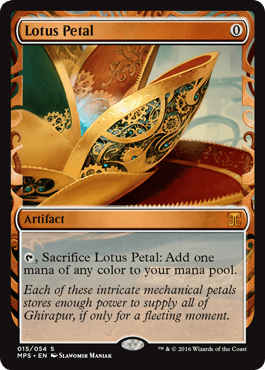 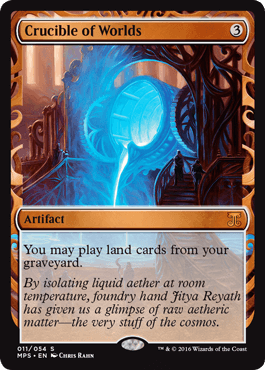 All of this amazing art and flavor text needed to be framed by something equally masterful. The process of deciding on the perfect fit was, according to Digges, "highly iterative and highly collaborative. Graphic designer Liz Leo designed the frames, then concept illustrator Tyler Jacobson painted some of the frame elements for a handcrafted feel. Then [Liz and her team would] show the designs around, get feedback, and run another iteration. We went through many variants in text box opacity, the brightness of the metal, how the filigree shapes interact with the art, and more before arriving at the final design."

Whether it involved finding high profile cards with resonant mechanics, selecting popular artists with a proven track record, crafting immersive lines of in-world flavor, or sculpting a card frame with a unique hand-crafted feel, not a single aspect of designing the Masterpiece Series: Kaladesh Inventions was overlooked. Each card is saturated with flavor that goes beyond the cardboard used to contain it, serving as a window into an intricate world of invention and adventure.