Speaking of themes that took forever to get support...

Ice Barriers. Wow. I've been making jokes about "Ice Barrier FTK" for nearly a decade, and I was pretty sure we'd never get more support for the theme. Period. Full stop. Pack it up and go home, boys and girls.

But surprise, surprise, Japan had their very own "Vote for a Structure Deck" Poll in June 2020, and of the ten themes up for grabs, Ice Barriers somehow won? Second place was Cyber Style, and I'm not sure exactly what that means, but the remaining eight themes have yet to see a Structure Deck announced. In descending order of polling results, they were Gusto, Trickstars, Morphtronics, Kuriboh, Kaiju, Star Seraph, Tour Guide, and Superheavy Samurai. You can check out the full breakdown of which themes got how many votes here, but suffice to say, some of them weren't even close. 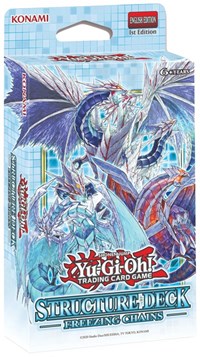 Some Stay Warm While Others Feel These Chains

If you're a little lost, I don't blame you. Go ahead, pick any three Ice Barrier cards at random, read their effects, and try to figure out what the theme does as a whole. Heck, up that number to five. If you're picking randomly, I'd wager that even ten cards might not be enough to divine exactly what this deck does.

Originally, Ice Barriers were supposed to "freeze" your opponents in their tracks. Take a look at Numbing Grub in the Ice Barrier and Dai-Sojo of the Ice Barrier. Those cards, along with over a dozen others, vaguely say… "No to this one very specific thing that may or may not ever come up in a given game."

I will say, the one time I found success with Ice Barriers was specifically siding Medium of the Ice Barrier in Spellbooks for the mirror match, because it was so easy to summon; it was more than likely that your opponent would have lots of cards on the field if they went first. If your opponent tried to counter you with Spellbook of Fate, then Spellbook of Wisdom meant you were free to start your rebuttal. 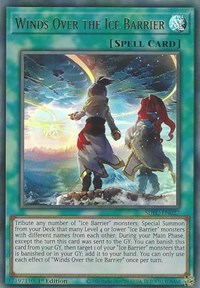 New Cards? Don't Sleep On Them

While none of the new cards will make you weep tears of joy, they all have their place depending on the deck you want to build. I think the two spells are the best of the bunch, but the other cards pack a punch as well. 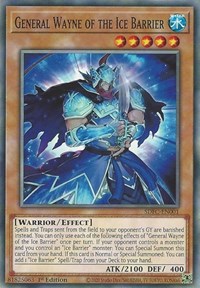 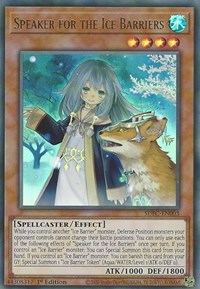 Lastly, my favorite is Speaker for the Ice Barriers. Not only does she talk to animals, but she Special Summons herself for free if you control an Ice Barrier, and likewise banishes from the graveyard to get you a free token. Both effects have applications in any Ice Barrier strategy, but I'm over here still focused on the fact she can talk to Defender of the Ice Barrier.

What Are These Non-Trishula Cards Doing In My Deck?

Surprise, we're going to be running some off-theme monsters in our build, but don't worry, they're mostly a vehicle to other things. There's nothing exceptionally flashy about the Marincess or Mermail cards; they largely just send cards to the graveyard for future plays, or support Marincess Coral Anemone. 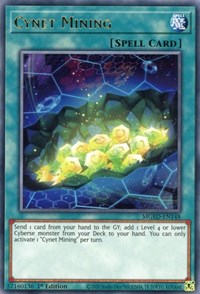 It's the same thing with Cynet Mining. Discarding a small Water monster to search Marincess Blue Tang turns into Marincess Coral Anemone reviving the Water monster you discarded. Whether it's a tuner, Swap Frog, or Prior of the Ice Barrier, you have way more options than "Normal Summon Revealer of the Ice Barrier, run into Effect Veiler, and cry."

Mermail Abyssdine might look like the odd fish-man out here, but when you search it with Mermail Abyssteus it hits the field for free. Free Water monsters mean free Marincess Coral Anemone which means Prior of the Ice Barrier.

Was this all just one long con to maximize Prior of the Ice Barrier? Maybe.

This All Started Off As Toadally Awesome Spam

Honestly, yeah, Toadally Awesome was my first thought when I started building the deck, but life's pretty boring when all you're doing is playing the same monster over and over again. You can focus on it, sure, but if literally the entire deck is just a vehicle for playing Toadally Awesome, it probably wouldn't garner much attention.

In my defense, several Ice Barrier cards are almost impossible to work with in a meaningful way, both old and new. Some Ice Barrier cards work well in a minimal capacity, but cards like Dewloren, Tiger King of the Ice Barrier and Terror of Trishula are more in the category of build-around cards you need to really plan for, not exactly cards you toss into whatever you're creating. 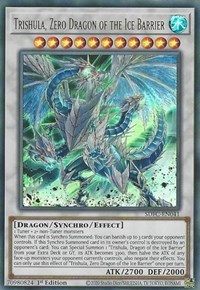 So building an Ice Barrier deck with a modicum of faithfulness to the theme's a bit tricky, and for what it's worth, I really tried to make pure Ice Barriers work. Let's just say I've seen better strategies than the purest Ice Barrier Deck imaginable.

Crystron Halqifibrax: "No One Helps Me In This House"

Back in September, I talked about the new Forbidden and Limited List like, eighteen seconds after it dropped. I defended NOT banning Crystron Halqifibrax for reasons such as this one: it gives decks that severely need help a nudge in the right direction.

First, Crystron Halqifibrax turns useless cards into good ones. If it's not obvious, many of your starting cards, or even stepping-stone cards like Bahamut Shark, for example, don't serve much purpose after their initial effect. Youu might as well use them for good, right? 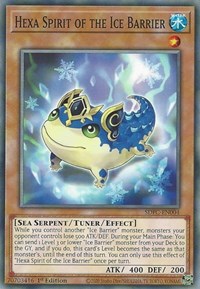 Lastly, Crystron Halqifibrax lets you summmon either Trishula on your opponent's turn. Tribute Crystron Halqifibrax, Special Summon Shooting Riser Dragon, make it whatever Level you need it to be, then Synchro Summon into a Trishula. Is that the game plan?

Well, it's certainly better than setting Terror of Trishula, folks. Check it out.

Revealer of the Ice Barrier

Dewdark of the Ice Barrier

Defender of the Ice Barrier

Freezing Chains of the Ice Barrier

Winds Over the Ice Barrier

General Wayne of the Ice Barrier

Hexa Spirit of the Ice Barrier

If you haven't figured it out so far, Ice Barriers lean heavily, and I mean extremely heavily, on the casual side. Despite the deck's standouts, "pure" Ice Barriers are limited by the same factors as most mash-ups: chiefly a lack of good monsters to start and end with.

Don't get me wrong - I love Trishula, Dragon of the Ice Barrier, but it's not exactly the type of card to build a whole going-first strategy around, unless you can miraculously figure out how to loop it to rip all the cards from your opponent's hand.

And don't get me wrong, there are ways, but none of them are interesting enough for… whatever day you're reading this on.

Even if you're not jazzed up about the Ice Barrier monsters as a standalone strategy, I'm glad we got some good reprints in Structure Deck: Freezing Chains. Crackdown, Trishula, Dragon of the Ice Barrier, and Heavy Storm Duster are all cards to pick up if you missed them the first time around.