Okay, flash back a few months ago in the weeks leading up to Pro Tour Shadows over Innistrad. Which deck absolutely dominated that Standard format? That's right, Bant Company of course! However, Bant Company ended up not being the best deck in the format — that award goes to W/G Tokens.

Now, Eldritch Moon has shaken up the format, and Bant Company has been given a variety of new tools to choose from while many other decks remain relatively unchanged.

Here I am, getting ready for Pro Tour Eldritch Moon, and once again the deck to beat at the Pro Tour is Bant Company. That archetype is more dominant and powerful than ever, which means that Bant Company is even more difficult to attack than it was before. There are a variety of new tools provided by Eldritch Moon, but the most important one is Spell Queller.

Printing Spell Queller may very well have been a mistake on Wizards of the Coast's part. Not only is the card powerful but it goes perfectly into Bant Company. In response to an opponents' spell, a regular occurrence is going to be: cast Collected Company, hit Spell Queller, and counter the spell. Every deck in Standard plays a ton of spells that cost four or less, so this card is always going to be good. It almost forces the opponent to find some sort of removal or bounce spell for the Spell Queller. Unfortunately for the decks that play little or no removal Spell Queller becomes a straight Counterspell that also attacks and can be found off Collected Company.

For those looking to play Bant Company right now it is necessary to be prepared for the mirror. The list that won the Open this weekend in the hands of Devin Koepke seems to have an edge in the mirror.

There is a lot to like about Koepke's list and it will be the version of Bant Company I will be doing most of my testing against. Looking at versions of Bant Company before the release of Eldritch Moon, there are some significant differences. The noncreature spells are still the same as the deck still wants the full amount of Dromoka's Command and Collected Company, but the creature base looks quite different. Most versions of Bant Company have now completely cut Jace, Vryn's Prodigy, and that seems correct — there aren't that many noncreature spells to flash back.

Replacing Jace, Vryn's Prodigy is Selfless Spirit. Not all lists have adapted Selfless Spirit in Bant Company yet, but it does a lot for the deck. Having fliers is nice because this deck stalls the ground easily, and against a deck like W/U Spirits having a creature capable of battling in the air is important. Of course, you can cash it in to save other creatures, which is nice, but perhaps the best part of the card is how it works with Archangel Avacyn. It is a creature that can be sacrificed at will to transform Archangel Avacyn and catch the opponent completely off guard. The Archangel Avacyn / Selfless Spirit interaction will be important for other decks as well.

Devin has a total of 11 copies of cards from Eldritch Moon in his maindeck. This would make sense for a brand new archetype trying to take advantage of the new set. However, the fact is that Bant Company was already one of the best decks in the format. Now we are adding Eldritch Moon into the mix and it is easy to see how this has become the best deck in Standard essentially overnight. Thalia, Heretic Cathar is just a great card especially in the mirror when facing off against opposing Collected Company or Archangel Avacyn. Having most of your opponents cards come into play tapped is a pretty big deal, but since Thalia, Heretic Cathar is legendary, I wouldn't play four copies.

Spell Queller helps in pretty much all of the previously bad matchups. Against Crytolith Rites strategies being able to counter one important combo piece or Collected Company can have a huge impact on the game. One of the tougher matchups is still going to be the white-based Humans deck. There, Spell Queller counters any of the opponent's spells as well as being a fine blocker. White/Red Humans is one of the worst matchups for Bant Company, but it is still about even.

Bant Company is the deck that everyone should be gunning for at the moment, and to be honest it is still likely going to continue to do well regardless of the bull's-eye on its back. However, come Pro Tour time, many players will have had a chance to fully dissect Eldritch Moon Standard and dig into trying to beat Bant Company. That will be the moment of truth for the deck.

There are a few decks from this past weekend that stand out to me in a metagame dominated by Bant Company. The W/B Angel deck Ronnie Ritner took to the Top 8 of the Open looks like not only a fun deck to play, but also a way to fight Bant Company. In order to have done well this past weekend it was necessary to beat some Bant Company decks. While it's true that Ronnie was eventually bested by Kyle Boggemes playing Bant Company, there are still some takeaways which may help this deck further develop. Ritner was one of very few players playing the W/B Angel deck, and his list may not be completely refined even though he finished in the Top 8.

This could be the evolution of W/B Control. We aren't seeing as much Gideon, Ally of Zendikar because of how poorly it matches up against an opposing Collected Company. Instead we are putting some creatures back into the maindeck of this strategy. The main form of removal at the moment is Dromoka's Command and to a lesser extent Reflector Mage, but not as much removal exiles an opposing creature. This means even when the opponent finds a way to deal with Gisela, the Broken Blade it should still go to your graveyard. Then this deck's endgame has the chance to set up perfectly. 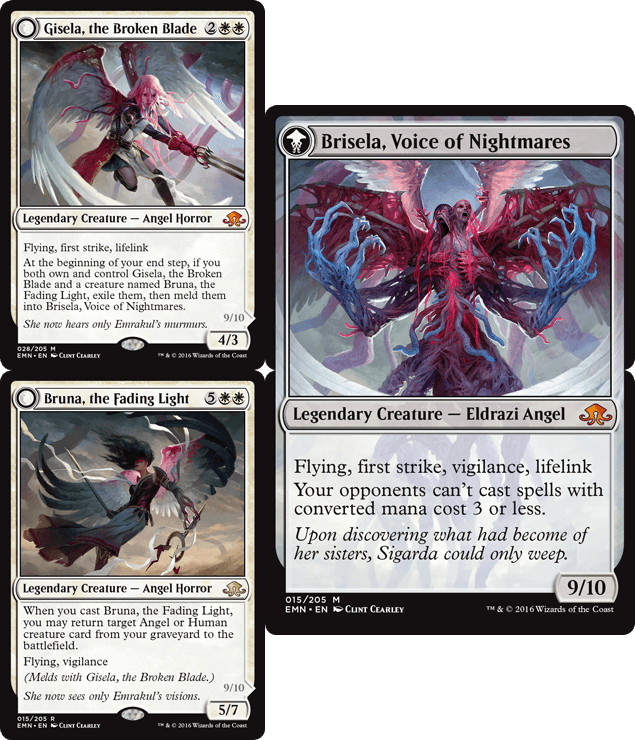 Casting Bruna, the Fading Light with a Gisela, the Broken Blade in the graveyard and then melding into Brisela, Voice of Nightmares is a game-ender. For a deck like Bant Company it becomes almost impossible to cast anything at all once Brisela, Voice of Nightmares is in play. Sometimes having a good lategame and way to go over the top of the Bant Company deck is good enough. Another good thing about this deck is a lot of its most important cards can't be answered by a Spell Queller.

Thalia's Lancers really ties the legendary creature theme together nicely and allows Ritner to play a toolbox of sorts. There aren't really that many different legendary creatures in Standard, but the ones that are available are some of the most powerful creatures in the format. In addition, creatures like Linvala, the Preserver are cards you might only want to play one of anyway. Now, you definitely wouldn't want to play more because with Thalia's Lancer it is pretty easy to find a bullet and cast it on curve, when necessary.

I would suspect this sort of W/B Angel deck to remain a player in Eldritch Moon Standard. The overall gameplan won't shift too much even if some of the card choices do. Even if Bant Company is the best deck, there will be plenty of players who want to play something different, and this W/B Angels deck becomes a real consideration. Spot removal like Grasp of Darkness is going to be important as a way to deal with Spell Queller, or any other creature in the Bant Company deck, for that matter. Expect to see an emphasis on efficient and cheap spot removal spells in controlling decks in the weeks to come.