My head is throbbing; I can't stop thinking. The night is dark. The moon is high.

I sit here writing an article. Is it my own desire to write this article, or is it Her's—is it Emrakul's? Does it matter? I just want all Her desires to come to fruition.

I need to write, no, I want to write this, but I don't want to go out, it's so dark and I keep seeing things. I haven't eaten in a while. How long has it been? A couple of hours? No, my dog has been missing for more than a couple of hours.

I haven't been able to eat since he's been gone. It's strange, maddening really. I can still hear him bark but he's nowhere to be seen. Unless I look in the mirror. The dreaded mirrors, ugh… I've smashed them all. All they show are lies and twisted images. My mirrors must be haunted by a geist—maybe by my hate, my guilt, my paranoia? Some dead relative? Probably Emma. She always nagged. Always killed. Buried the bodies. Where? Bury them. Eat them.

Probably still here now. I put a muzzle on my cat. She still bites. Strange.

I gave her to my brother. He's dead now. The cat was harmless. I need to finish this—I need to start. Is anything ever really finished? When did it all start?

The mirror! Whenever I gazed into it I saw my little yorkie, Bruce, attached to me. No, it was more than it. It was almost like melted into me? On my back. I must be hallucinating. Smash the mirrors. Where's the cat? So many bodies. Pick. Me. Emrakul.

I've already been chosen. 13. I'll just. I'll just write. About anything, I need to get this to Stybs soon. To anyone. They need to understand. She needs me.

Golgari Thirteen: My first take on Triskaidekaphobia. I'm excited to try out this wacky enchantment with Tree of Perdition. This deck is a combo deck, but it's not all-in on the combo since that would make us vulnerable. The duo of Triskaidekaphobia and Tree of Perdition can be strong but against some decks they have little interaction, especially if their main form of removal is Declaration in Stone. At its heart this deck is a Season's Past deck with a combo finish. Let's talk about it! 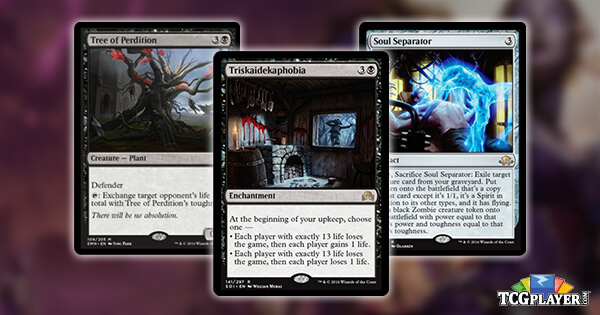 With Soul Separator you will get a 0/13 zombie that will block for days and you'll get a 1/1 Spirit with Tree of Perditions ability. So when activate the Spirit's ability your opponent's new life total will be set to one. You can then finish them off by dealing one damage or having Triskaidekaphobia drain all players for one life. Doesn't matter if they are at thirteen life or not: One life is the same as thirteen in this scenario.

You are a tap out control deck. You will be trying to kill everything and staying alive for as long as possible until you can get a Triskaidekaphobia out and switch life totals. Don't worry about using Triskaidekaphobia to continuously heal yourself for one since you can set your opponent's life total to thirteen easily with Tree of Perdition. You then have ways to dig through your deck including Dark Petition to get a certain piece of the combo if you want to.

Things you lose or mill away can be rebought by Greenwarden of Murasa, which can also be rebought again when it dies or with Soul Separator. (Just don't use it's "when it dies" trigger!) A 6/6 zombie and a 1/1 flying Eternal Witness is pretty good I hear. Emrakul, the Promised End is a good way to set up your combo or to just make your opponent have a bad turn. She can also just kill them on her own. The same can be said about Ulvenwald Hyrda and Greenwarden of Murasa.

Moving on, let's talk about kitty cats and demons! Everyone likes a cute cat right?

"Oh these etched runes on my skin? They're nothing, don't worry about it. Here you try them on."

What does the deck do?

It's strange to go from having no two card combos in Standard to getting two right off the bat. The plan here is to use all of the non-"You lose the game." modes on Demonic Pact before giving it to your opponent with Harmless Offering. This will force them to pick the last mode since Demonic Pact still remembers all the modes that have been chosen even after it switches controllers. 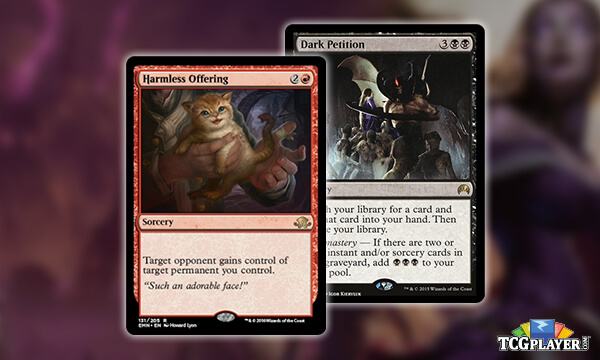 The one problem here is that Dromoka's Command is a card in Standard that is played a fair amount. You have Oath of Chandra to help with that, and you have the mode on Demonic Pact to make your opponent discard two cards. After sideboarding, if your opponent has a ton of counter magic or is playing Dromoka's Command, you can bring in the discard package of Vessel of Malignity and Whispers of Emrakul to empty out your opponent's hand. I could honestly see a version of this deck that plays those cards main deck alongside Tormenting Voice to turn on Whispers of Emrakul relatively quick. The discard package is also pretty nice against the ramp players.

One thing you need to watch out for is if Emrakul, the Promised End is on the rise. If she is then Demonic Pact is a scary card to play since if you're Mindslaver'd they will just pick the "You lose the game." mode for you. This is a good starting point if you're in the market for making pacts with demons then making your opponent pay for the deal.

Next up is a favorite that is being revitalized!

Izzet Eldrazi has been a pretty decent weapon to play in Standard. The problem however was that White-Green Tokens could give you a rough time and that's not where you wanted to be, especially since you couldn't "flashback" Kozilek's Return without casting Ulamog, the Ceaseless Hunger. Well that's changed now thanks to our new friend, Elder Deep-Fiend.

Not only is this card great not only because it has flash and can be emerged for cheap off Drowner of Hope, but it also costs eight mana which is enough to get Kozilek's Return to deal five damage out of the graveyard at instant speed. The card can also be flashed in to tap your opponent's mana down and then kill an attacking creature. The card is amazing in this deck. It's what the deck has been really looking for. What's great is that we can just hardcast it too and that's not unreasonable, especially since Eldrazi Temple helps us cast it. 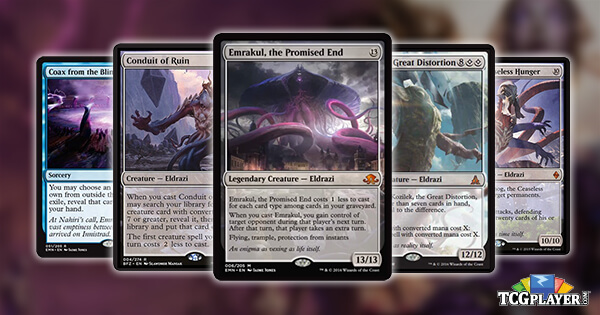 We also get a new toy: Coax from the Blind Eternities. We no longer have to play Ulamog main deck anymore. Instead we can wish for it or any other Eldrazi we need. Need cards? Get Kozilek. Want to Mindslaver your opponent? Emrakul will do that. What if you just want a Thought-Knot Seer or Drowner of Hope to deal with all the aggro decks? That's fine too! You can get Conduit of Ruin to Tutor up your eight-drop and make it cheaper. Tutoring up something like Reality Smasher to pressure Gideon isn't out of the question either. Coax from the Blind Eternities lets you play a whole different way!

The last deck I want to visit for today is a favorite of mine form the past.

I haven't come back to this archetype since we lost Ugin, the Spirit Dragon. However, I really believe Emrakul, the Promised End is what we needed to Revive it. Currently I'm playing Coax form the Blind Eternities but in testing it may prove that playing three copies of Emrakul here is just better. However, since Coax doesn't exile itself I want to test that out first with Jace, Vryn's Prodigy. If we can double dip on our Coax from the Blind Eternities and get away with it, then that's something I'm interested in doing. The deck can still win without casting Take Inventory thanks to the help of Part the Waterveil. Part the Waterveil allows us to turn the corner fast when we're ready to kill our opponent. This deck also tries to take full advantage of Take Inventory. 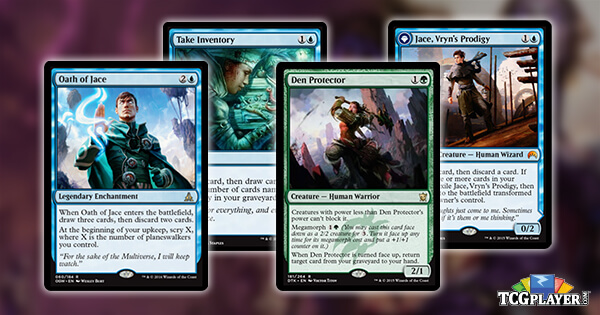 We can get rid of the first Take Inventory with Jace or Oath of Jace and then make the rest grant a ton of value! I'm even fine rebuying a Divination+ for two mana with Den Protector. I think this will be fantastic and will work well. What's also great about the new Eldrazi is that they can go to the graveyard. This is good since we can rebuy them with Den Protector. The only problem with this deck that I can Foresee is that without Ugin we might have a difficult time dealing with the board if it gets out of hand. Only time and testing will tell.

That's all I have for you this week. Remember these are all brews, but I believe they're a great place to starting to see how they do against some of the best decks in the format. I hope you enjoy these decks!