Today we are delving into more Eldritch Moon brews now that the whole set has been revealed. There are some neat cards from Eldritch Moon that I want to build around. Some of the cards that really pique my interest are Deploy the Gatewatch, Mind's Dilation, Bedlam Reveler, and just all the Spirits in general. I'm going to brew up some decks with these cards in mind. Just remember these are brews and I have not tested them extensively. I'm trying to get your juices flowing! 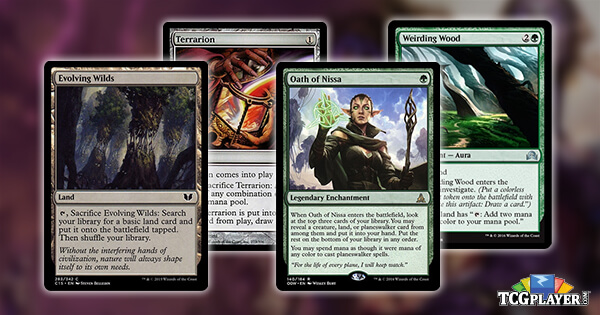 This deck is a five-color deck, so we need all the fixing we can get. Oath of Nissa is the best fixer, but I don't want to rely on one card to cast our spells. If we don't draw Oath of Nissa we will still have other ways to fix our mana. Evolving Wilds isn't anything new — however, Terrarion and Weirding Wood are. Terrarion is a one-time fix that also cantrips. A more permanent fix is Weirding Wood, which is basically a Fertile Ground with investigate. It also ramps us up into Planar Outburst and our more expensive Planeswalkers.

Deploy the Gatewatch looks to be a fun and exciting card. This is where I would start with the deck if I wanted to try and make it competitive.

Next up we have a deck that makes 4/4 flying Ali tokens. Get hype! 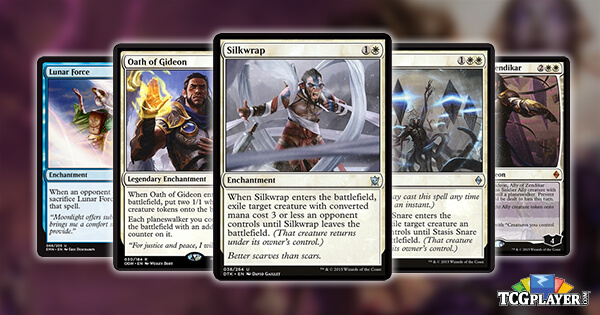 All these cards remove creatures from the battlefield, counter spells, or make creatures to block with. Which gives us enough time to get our engine going and bury the opponent in card advantage and angels. 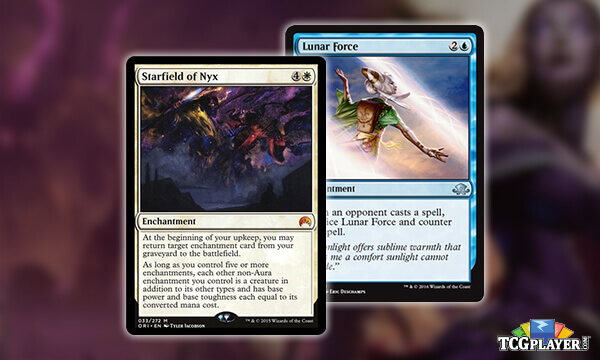 This combo forces an opponent to cast two spells a turn and only get the value of one spell. The longer you can keep this mini-combo going, the more mana you tie up and the more cards they are forced to cast and waste on Lunar Force. Pretty sweet, if you ask me!

Okay, okay. Here's my take on an aggressive deck.

This deck has aggressive strategies along with a combo finish. Sure it's not pedal to the metal when it comes to winning, but I promise you it is capable of one-hit kills thanks to Uncaged Fury. You just need to get one of your creatures to connect and that shouldn't be too hard with flying and Slip Through Space. The deck can also go to the face with burn with the help of Incendiary Flow and Collective Defiance. It does kind of suck that Incendiary Flow is a sorcery, but it is still very good, especially in a world of Sylvan Advocate and Lambholt Pacifist. Try to cast Bedlam Reveler when you are hellbent so you can take full advantage of the "draw three cards clause." If you liked the U/R prowess deck of old then give this deck a whirl and see if it's up your alley!

Another deck that is similar to U/R Prowess is W/U Spirits!

This deck operates almost completely at instant speed. With an active Rattlechains, it is 100% at instant speed. It is very similar to U/R fliers except it is more resilient and doesn't fuel your opponent with Fevered Visions. We are trading the reach with burn spells for resiliency and more countermagic.

Spell Queller is one heck of a magic card. It's already a pretty good body for three mana and flash, but it's also a Counterspell. Being able to counter Gideon, Ally of Zendikar on the play or on the draw will be pivotal. I see Spell Queller being an all-star in this deck.

Another good spirit is Selfless Spirit. It counters any Wrath of God affect and can protect Spell Queller from a removal spell if your opponent is trying to get their spell back. So not only do you have Clash of Wills, Spell Shrivel, and Mausoleum Wanderer to counter spells, but you also have Selfless Spirit. This should show you how much that deck can protect itself.

The last list I want to look at is a delirium deck to try and fully abuse delirium with Emrakul, the Promised End.

Golgari Delirium was pretty fringe before, but now it has gotten some really good payoff cards in Whispers of Emrakul, Ishkanah, Grafwidow, and Emrakul, the Promised End herself. The deck needs to make it to the late game, so it needs the full playset of Languishes along with some spot removal. Crop Sigil is better than Vessel of Nascency since you don't have to activate it in order to get delirium going. Instead you can just activate it whenever it's convenient for you. Just be weary of Dromoka's Command. Don't be blindsided by that card.

I'm not sure how good Liliana, the Last Hope is but it does keep the small creatures at bay and her minus ability can recur any creature. Since the deck mills itself, it's a good way to rebuy something like a Den Protector or Emrakul if we mill her. I can see playing a couple more Liliana, the Last Hope in the sideboard to combat humans. I know she doesn't look that great on paper but she's still a three-mana planeswalker and she will see play.

Having two Traverse the Ulvenwald basically gives us three copies of each of our one-ofs. 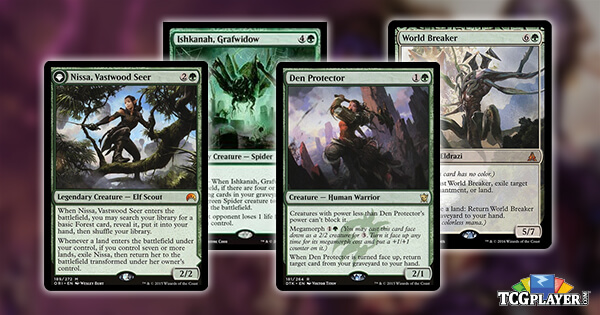 Nissa, Vastwood Seer allows us to get a planeswalker and start gaining incremental card advantage. Ishkanah, Grafwidow clogs up the skies and makes a total a four bodies, and on top of all that, she not only makes it hard for your opponent to attack through her, but she can also drain your opponent at the end of their turn if you have nothing else to do. Den Protector can rebuy Traverse the Ulvenwald or any other spell that has gone to the graveyard. World Breaker is great against decks with flying creatures like Archangel Avacyn or Gisela, the Broken Blade. You can also tutor it when you want to deal with an enchantment, artifact, or land. We have a Wastes in the deck so that we can recur it if our opponent kills it. All in all, Traverse the Ulvenwald is a pretty strong bullet to have.

Thank you so much for reading.
Until next time,
Ali Aintrazi
@AliEldrazi