Amonkhet looks great so far, and the hits keep coming! I'm going to talk about some of the cards that have the potential to be important players in Constructed.

It has been a while since we have had a straightforward red beatdown deck. The closest we come to that now is Mardu Vehicles, but that can be more of a midrange or control deck after sideboard. I'm talking about the potential of moving back to a deck with a great mana base and aggressive curve, and let's be honest, the mana in Mardu Vehicles isn't great. The creatures in traditional red aggressive decks often have haste, and we have some good hasty threats in Amonkhet.

Hazoret the Fervent is not a traditional creature, but in an aggressive red deck it is possible to make Hazoret the Fervent a creature a lot of the time. A four-mana, five-power creature with haste and indestructibility is actually pretty insane. This is the type of card that works well with cheap spells. You you can cast them early and play Hazoret the Fervent at the top of the curve when your hand doesn't have much left in it. Hazoret also works well as a way to discard cards at will to make sure your hand size is low. Think of a madness deck, for instance, that actually wants to discard its hand!

One way to go about building Red Aggro is to simply go mono-red, and not have to worry about building a mana base. Here's a shell to give you an idea of what I'm talking about.

This deck combines madness synergy with a couple of new cards from Amonkhet that work well here. As already mentioned, Hazoret is going to be at its best in a deck that can dump its hand quickly, and landing the god as a creature on turn four is pretty great. Beyond that, Hazoret the Fervent is a madness outlet itself and a way to deal those last couple points of damage. It is going to be crazy good in this type of deck, so players will have to try to play more removal that exiles creatures. Gods have a high ceiling, because they take a little work to turn into a creature, but the indestructibility makes them difficult to remove from play.

The other new card here is Flameblade Adept, which also happens to work great alongside madness cards! This creature can be pumped up a significant amount in a single turn alongside a card like Ravenous Bloodseeker. The other factor is that Flameblade Adept is a one-mana spell, which works alongside the concept of having lots of cheap spells with Hazoret as a top end. It is possible you could add some of the cycle lands to this deck as another way to pump Flameblade Adept, or even go into black for other madness cards and enablers.

Multiple cards from Amonkhet work alongside madness, so expect the madness cards in Standard to become much more playable for the next few months.

Mana bases are constantly changing, and the cycle lands are certainly going to see lots of play in Standard (and are also not to be overlooked in Modern.) The last time we saw cycling lands was back in Onslaught when the cycling mechanic was first introduced, and it has been a while since then. Those lands cycled for only a single colored mana, but also produced only one color of mana themselves. Both the new and old cycle lands came into play tapped, but the ones in Amonkhet are fetchable. This could become very important, especially when thinking about formats like Modern where fetch lands are legal.

These lands will be necessary fixers in Standard, and protect against getting flooded. Having the option to either play a land or cycle it means that people can start playing slightly more lands in their decks, and then use the cycle lands later in the game to draw a card if needed. The bicycle lands should lead to smoother games of Magic in general, and their existence could slow down the format since they come into play tapped.

Taking a turn off to play a land comes with its risks. For a deck like Mardu Vehicles, you want to be curving out and playing a threat on the first turn of the game, so that deck shouldn't benefit as much from the new lands. Also, spending two mana in order to cycle a land takes time, similar to sacrificing a clue, and means you aren't making a play that impacts the board.

It seems that introducing the bicycle lands is a positive change for the Standard format. It will allow for more games of Magic to be played due to fewer mana problems. Wizards seems to be printing aggressive cards to compensate for having more lands that come into play tapped, but there will still be the flexibility to play two and three-color decks, because Wizards continues to print multicolor lands. In Modern, look for cards like Life from the Loam to be a hot commodity.

Split cards are also being reintroduced in Amonkhet, and while there have only been a couple previewed as of this writing, I'm expecting to see a handful in the set. Having a card that is as flexible as a flip card is dangerous if the halves are too powerful or undercosted.

All the split card have aftermath, which provides a condition to the backside of the card. This means you need to either cast the front half to get the card into the graveyard, or discard the split card, so that you can play it out of the graveyard. In many ways, aftermath is similar to flashback. Expect to see looters and other profitable ways of getting cards into the graveyard to be played alongside cards with aftermath.

Aftermath is going to be important, and so will embalm. These are two different ways to gain additional value after a card has gone to the graveyard. There is still very little graveyard hate in Standard, so we will have to wait and see if that changes with Amonkhet. The Zombie decks in Standard have done well because of both their ability to abuse the graveyard and the lack of any type of graveyard hate.

Hazoret's Monument is a great example of a card that will work well alongside of embalm and aftermath; if you are simply looting away embalm or aftermath cards it becomes card advantage. Because embalm cards have the ability to be used for value from the graveyard, discarding it means there is no longer a need to worry much about the front part of the card.

An Early Look at High-Impact Cards

I am surprised by this one. The stats on Prowling Serpopard are high enough that he can be played even against decks that don't have any countermagic. If Prowling Serpopard becomes heavily played, it will make life difficult for Temur Tower and other control decks. There certainly are ways to kill this guy, but there will be other times when you are relying a being able to counter the opponent's creature and Prowling Serpopard comes along instead.

Prowling Serpopard is a threat a control deck needs to answer immediately in order to make countermagic okay, and there isn't exactly many really strong counters in the first place. When we compare Disallow to two-mana counters like Mana Leak, there is definitely a power level difference. The reason I am surprised Prowling Serpopard is being printed isn't because the card is too powerful – it's because it is specifically good against control, but control is already in a difficult spot in the metagame, and now life becomes even harder.

The closest thing we have seen to Glorybringer in recent memory is Stormbreath Dragon. You can use Glorybringer as essentially an immediate removal spell by using the exert, and then you still have a big dragon a couple turns down the line. This is a flexible creature that would almost be good enough without exert, so once you add that ability onto the card we have a creature that should make a significant impact on the Standard format. Glorybringer is happens to be a perfect answer to a Gideon, Ally of Zendikar, something the format has been sorely missing. 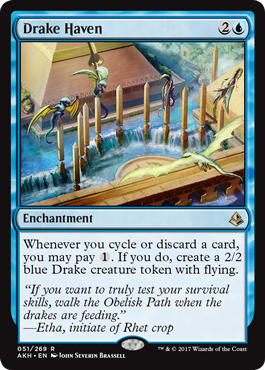 Looking back to Onslaught, enchantments that benefited from cycling were very important; Astral Slide comes to mind. Drake Haven provides a different effect than Astral Slide, but that doesn't make it worse. Paying a single mana for flying 2/2 creatures is a great deal, and I expect that Drake Haven will see play in both cycling and madness strategies. This is a build-around card that is extremely impressive, and will make enchantment removal more important than it currently is.

Most of the time it will be correct to put all the counters on Channeler Initiate, which gives you three uses to add mana, and then the body it has after that is reasonable. We have not seen a mana creature this powerful in a while, so this is exciting! Perhaps ramp decks will have legs again, as Channeler Initiate will fit best in decks that are mana hungry. 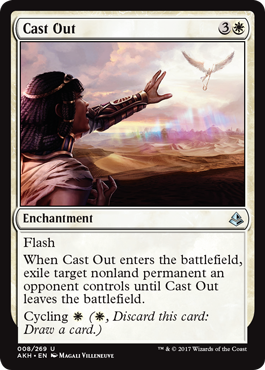 This is what we have been waiting for! A flash enchantment that can answer planeswalkers and has cycling is perfect. In Standard having answers to Saheeli Rai and Gideon, Ally of Zendikar has been a major issue. Cast Out looks to be the most important all-purpose removal spell we've seen so far in Amonkhet. The fact that is has cycling means you can always cash Cast Out in early in order to find lands, or you can cast it to great effect when needed.