As some of you know, in addition to playing and writing about Magic, I run a magazine (www.jits.fr). I keep part of the stocks of the unsold magazines in my dingy basement that looks a bit like an old dungeon. A couple of weeks ago, I bought big plastic boxes to give them extra protection against humidity but knew they would need to be transferred to a safer place soon. That was my mission last week. On closer inspection I discovered that some of them had been damaged by humidity and that's when I felt the dread.

It was at around the same time that I remembered another big box I had stored down there, a box that had been following me for years. First when I moved to Sweden in 2005, then when I moved back to France in 2007, and finally when Monica, my wife, moved to France and we had to move to a new place in 2014. This box, full of my old treasured decks from events, had endured all the traveling and I placed it in the new dungeon basement, making a mental note to find a better, safer place for it.

I kind of lost track of my mission, and today, as I was trying to record videos but couldn't quite find interesting matches to show (and got a bit frustrated), I decided to go downstairs and sort the decks out, show some of them on Twitter for funzies…

To my horror, the box didn't do as well as the magazines: more than 90% of the decks were covered with mold, I couldn't even open some of the deckboxes. Some of the decks had melded into one big 40-card cardboard piece, kinda like Bruna and Gisela in Eldritch Moon. My heart sank. I guess it was my fault for not taking care of that treasure I had been keeping for so long. I had stored all my limited decks from premier events, PT's, GP's, Worlds, Continentals and Nationals from 1998 to 2006 in that box. All dead.

Every so often, I took one out to remember the good / bad times. They all had a story. The thing is, my memory from 1997 until 2006 is still damn good. Name a tournament, I'll tell you the deck I played, the colors I drafted and the notable opponents I faced.

Here are some of the stories I remembered as I was throwing these relics of the past away.

Not Meant to Be

I 4-0'd with a sweet red-white aggressive deck featuring Glorious Anthem back in '99 at PT London, back when drafts had four rounds at Pro Tours. Yep, four rounds. Every first draft of the day had four rounds, so we could play seven rounds in total with only two drafts. 5-2 made Day Two (actually, Top 64 made it, sometimes 4-2-1 made it, but it was risky to ID, very different from today's top 280 making it). They had had PT's with two three-round drafts, but PT London wasn't one of them. Also, most events that involved four-round drafts had at least an hour or two delay due to pairing problems in the last round (a 3-0 player playing an 0-3 player, software crashes…)

The picture of this beauty didn't endure the passing of time well, but I remember the highlights vividly. In the second round of the tournament, I played against an English guy who still remembers the games we played to this day. I'm very proud to have been the first person to beat Richard Hagon in a PT. Who knows, perhaps if he had beaten me back then, he may have started an incredible carrier as a pro player and we may never have been lucky enough to see his cheery face during coverage today. Yes, you can thank me for that. 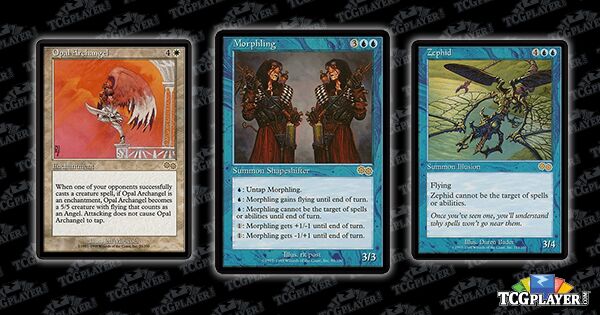 When I saw these cards, I couldn't help but smile:

They are three Limited bombs, all from the same draft, and from my first three picks.

I'm 5-1 after day one of Euro's '99, sitting at table one for the first Urza Block booster draft of Day Two (only two three-round drafts and a cut to Top 8, no four-round drafts shenanigans). On my right, an infamous Finnish player. On opening my first pack I found a Morphling. Morphling would be a pretty good card in draft today, but it's nowhere close to how good it was back in the days (do you remember how it worked with "damage on the stack"? Well "damage on the stack" had been implemented only a couple of months before.) So of course, I first picked Morphling, and got passed an Opal Archangel, which is also one of the best rares of the format. Next I was passed a Zephid. Three picks, three broken rares, I was happy with that. At the back of my mind I wondered what my neighbor had taken over the Archangel.

I got my answer after the second-round match against him when I still couldn't figure out the conundrum and asked him about it. Without any hesitation, he answered: "I peaked and saw you picked a Morphling and I wanted to put you on blue-white."

Ohhhhhh-kay. I'm pretty sure that wasn't allowed back then, either.

I beat him and proceeded to lose in the semi-finals of the tournament to Nicolai Herzog, the eventual champion.

The Car That Got Away

Let's rewind a couple of years back. Toulouse, January 1998. At that time, I had already played in my first Pro Tour and was trying to make my way back to it. I awkwardly ID'd myself out of GP Madrid the week prior (to ninth place) and had registered to play at the local stop of the "Paradise Tour," a tournament that would qualify the winners of each stop to a grand Final tourney in Paris a couple of months later. The prize for winning the tournament was a car and I could barely contain myself.

A car. A freakin' car. So I packed my Winter's Grasp and Thermokarst and won the Extended portion of the tournament, qualifying for the tournament in Paris in the process. I would win GP Lyon just a week later with the exact same deck.

So here we were, Paris. "Paradise Tour" Grand Finals. The tournament was played in a store that probably used to be a warehouse before, with enough room to park a car in it. And there it was… a second-hand but shiny, new-looking car. The main challenge was to do well in a Tempest-Stronghold draft where top seeded after the draft portion would choose among the Top 8 decks of PT NY '96 to play the elimination rounds. The structure was also something to smile about now: five rounds with the same deck, playing against players from your pod in the first three rounds, and two rounds against players from random pods.

My black-red deck took me to a 4-1 finish (losing the last round) and to the second place of the standings. I had had time to study the PT New York decks before and knew exactly which one I wanted. I remember actually playtesting these decks. Preston Poulter's Ernham-Geddon deck was my pick, even with all the Necro decks around. I made a point to keep my deck choice to myself, but may have insinuated to Laurent Laclaverie (first-seeded), that Bertrand Lestree was probably the best pick. He took the bait and I got the deck I wanted.

The finals would be played just like at the Pro Tour, best of five. With all the delays five rounds of cross-pod pairings can cause, it was already late when we started playing the quarters. I was paired against Laurent for a White-Green on White-Green Land Tax mirror match (Lestree had two, Poulter had three and another one in the sideboard) that took ages to finish (I think it went down to game game). And even then, I had to wait for the other quarters to finish.

Semis went faster, and in the finals I was up against Laurent Pagorek, one of France's early Magic stars running what probably was my easiest matchup: Mark's Justice's "Elkin Bottle Challenge" deck.

It was around 1 a.m. and we still had a winner-takes-all, best-of-five match to play. I could already see the picture of myself holding the coveted car keys, but there was a pretty significant logistical issue here. How was I to take the car home to Toulouse if I won? I couldn't drive. Most importantly, at 16 years old I wasn't even old enough to drive. Laurent already had a car and didn't have much need for it either. The organizer offered to sell the car back to the shop and give us the money. Laurent and I agreed on a 66-33% split (winner would take two-thirds of the money). The car cost 20,000 french francs – about 3,000€.

As expected, I steam rolled Laurent in a very quick three-game match (the Icy Manipulator control deck had a very hard time dealing with three Disenchants and two Divine Offerings). I was then given a 12,500-franc check, and I could travel home on the next day, earning the most money I had ever made at the time.

I was so happy, stoked that my effort paid off again. The happiness faded when I went to cash the check and it bounced. "Oh don't worry, it's because the car shop hasn't paid yet, try again next month," was the response I got. A few months later it bounced again. Trying to contact the organizers had apparently been a futile exercise as I later learned that they had left the country, never to be seen again. When I asked my dad what we should do, he said a lawsuit would probably not be worth it…

I never saw the money or the shiny car. People gave me a hard time for having been ripped off, but I didn't care too much even though it was a lot of money… for some reason, money didn't mean as much as winning tournaments.

There is a lot of stuff you can keep as souvenirs over 20+ years of playing Magic. I used to collect everything, the shirts, the playmats, the decks. Over the years, I started to make room and sold (mostly gave away) my PT shirts (that are on display in a store in Kentucky), sold most of my Worlds playmats (some of them for more than $500). As for my decks, I had planned to either auction them off for charity in a couple of years, or show them to my kids in 10-15 years: "see, that's what Daddy used to play with, these cards are three times your age!"

Well, that's not happening since the cards are on their way to being recycled. What is happening, and the reason I'm sorting all my stuff, is that a Tiny Raph is coming later this year in November, so we'll need all the room we can get to store all the stuff!

As for the loss of some valuable pieces of memory, I'm fine with only keeping the event badges to remind me of how much Magic has helped me to travel, meet so many people and overall, made this life so awesome.