With Dragons of Tarkir, the entire timeline on Tarkir has been altered. Sarkhan has changed everything and the dragons once again rule the skies. As such, dragons have had a huge impact on every form of magic and creature on the plane...including today's exclusive preview card!

But first, let's take a look at a few of the cards that paved the way for today's card, starting with this one mana gem…

Despite a misleadingly powerful ability, Force Spike has been a formidable card in many eras of Magic. While the card sees little play currently in the formats it is legal in, the ability itself - to force an opponent to pay an extra mana for their spell - can be nothing short of back breaking and game winning. For proof of this you need only look to the ubiquitous inclusion of Daze in the Legacy format. This is a card that is played in every blue deck that can afford returning an Island to its hand, and the result is often forcing the opponent to play an entire turn behind. Even the mere threat of Force Spike (or Daze) causes the opponent to play the game entirely differently, playing all of their spells off-curve for fear that you might be able to counter them for a single mana, or if they don't have a single extra mana.

Of course there are many variations of the "circumstantial counter," with Mana Leak, Condescend, or Circular Logic being a few of the most popular variations, some of which still see play in some very competitive decks and formats.

However none of the circumstantial Counterspells actually hold a candle to the original - a card that was actually deemed too powerful to still see print: Counterspell.

Two blue mana. Counter a spell. Period. Well, two periods there if you want to get technical. This was the cleanest way to counter a spell ever printed, the most elegant, and some might say the most powerful. No tricky ways for the opponent to get around it. No exhaustive mana costs. No restrictions such as having to counter a creature spell (Essence Scatter, Remove Soul) or having to counter a noncreature (Negate). Just two blue mana and a countered spell. While the specific mana cost meant that only decks that were heavy enough into blue could play it and fulfill the two blue mana by turn two, even this restriction would not prove sufficient enough to limit the cards power. Counterspell hasn't seen a reprint in a core set since 7th Edition, or in an expansion set since Mercadian Masques in 2001. That was an insane fourteen years ago which means the card is not even legal in the Modern format, which displays some of the game's most powerful cards and strategies.

Over the years there have been many variations of Counterspell, but the version it seems we're all stuck with is the "Cancel Plus" version; that is to say, a Cancel plus a scry (Dissolve) or a Cancel plus exiling the target (Dissipate). Three mana is the new two mana for Counterspell, it seems. 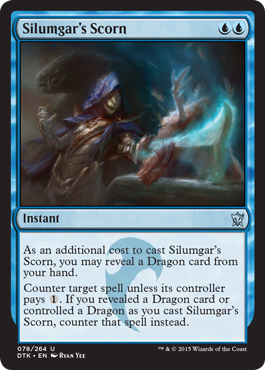 Yes, I will wager that this is going to be as good as it looks...which is to say "very."

The first thing I was reminded of when I first saw Silumgar's Scorn was Lorwyn. Not only for the cycle of lands that required you to reveal an appropriate creature type for the land to come into play untapped (Wanderwine Hub) but also for the creatures who required the same, lest they cost significantly more mana (Wren's Run Vanquisher).

The difference here is subtle but large. Whether you control a dragon or have one in your hand to reveal as you cast Silumgar's Scorn or not, the Scorn still does something, and does something quite powerful at that. In the situations where you can't fulfill the additional cost, forcing our opponent's to play their Siege Rhinos on turn five instead of four, for fear of us countering it, is huge! Then there will be times when we simply have a Dragonlord Ojutai, Dragonlord Silumgar, Silumgar, the Drifting Death, or Stormbreath Dragon in our hand to reveal, making this full on Counterspell. Similarly there will be times in the late game where you actually control one of the aforementioned control deck finishers (two of which have or can gain hexproof), making this the two mana Counterspell of old we've often dreamed of returning. This is a card that actually rewards us for having one of our five or six-drop finishers in our opening hand, which is just huge.

But the playability of this card isn't restricted to Standard. I want to cite one particular card that has me especially excited to try and build around Silumgar's Scorn…

Yes, this old favorite. Nameless Inversion has a couple of uses, the first of which is killing a creature and the last of which is by no means pumping our Tarmogoyfs with the "tribal" card type. It kills everything from Goblin Guide, to Snapcaster Mage, to Pestermite, to Thragtusk, while also giving us a means to pump our own creatures like Tasigar, the Golden Fang, making him a 7/2 if unblocked. The card is incredibly versatile and being able to reveal it and turn Silumgar's Scorn into a full-on Counterspell is just huge. Another option we have while already playing green is to toss in a Chameleon Colossus or two. With protection from things like Abrupt Decay, Lightning Bolt, Lightning Helix, and Slaughter Pact, he might be a formidable threat that turns on our Counterspell in the early game or allows us to protect him with it in the late game.

Meanwhile, Stormbreath Dragon and Thundermaw Hellkite are perfectly serviceable creatures in Modern, indicating that Temur, Jeskai, or Grixis midrange or control builds might be completely viable with Silumgar's Scorn.

I don't know the exact home for this card once Dragons of Tarkir is released, but you can bet that it will be somewhere. And I don't think I'm too far off in assuming that Dragonlord Ojutai, Ojutai's Command, and Ugin, the Spirit Dragon are also going to be included. The best part about Silumgar's Scorn is that it challenges deckbuilding, but even when your deckbuilding endeavor doesn't come together 100% to make Silumgar's Scorn the best card it could possibly be, it's still a pretty darn great card.

Thanks for reading, and I'll catch you on Thursday!