Creatures like Sylvan Advocate, Tarmogoyf, and even Death's Shadow have shown us that large creatures for a small cost are among the deadliest cards in Magic. They also reveal that there is no such thing as a free lunch. These cards don't just function at full power straight out of the box — some setup is required. 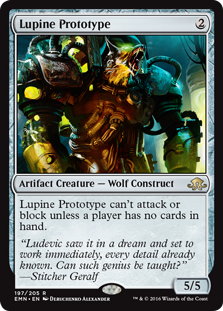 Unlocking the power of Lupine Prototype won't be easy, but all colors are welcome to tackle the job, and I expect that some decks will find that the price is worth paying.

There are two paths — either emptying our hand or emptying the opponents — that allow Lupine Prototype to enter combat and do serious work as an undercosted 5/5 creature. Keeping the opponent's hand empty requires copious amounts of discard, so it's not a reliable path except in the most dedicated discard cards. The thing that immediately came to mind when I first saw Lupine Prototype was Modern 8-Rack, a deck centered around discard that seeks to empty its opponent's hand ASAP, and in the process empties its own hand with cards like Liliana of the Veil.

In this deck, Lupine Prototype is like a colorless Tarmogoyf, a hyper-efficient threat that's both cheap and likely to be the largest creature on the battlefield. 8-Rack decks are typically creatureless in the maindeck, which helps it take advantage of cards like Smallpox or even Ensnaring Bridge, but these decks always sideboard creatures that can apply pressure to control and combo opponents that can't easily deal with these unexpected threats. Typical creature fare includes Dark Confidant, Nyxathid, or even Pack Rat, and Lupine Prototype fits the same mold. It's most comparable to Nyxathid, and while it's a bit smaller, the cheaper cost means everything in a fast format like Modern. It especially seems like a lot of fun alongside Pack Rat, which can help discard down to zero cards. 8-Rack has long existed on the fringes of Modern, and a new card that seems tailor-made for the deck is an exciting development for its competitive prospects.

Using Lupine Prototype in Standard is a bit tricky, but there are tools available that will help make it work. Madness comes to mind, because discard outlets are an easy way to get hellbent, or zero cards in hand. The madness colors, Grixis, don't typically have access to cheap, large creatures, so Lupine Prototype could be something worth working for.

Lupine Prototype seems great with Olivia, Mobilized for War, because it helps in bringing hand size to zero, and it could give Lupine Prototype haste for a surprise attack dealing massive damage. It's really interesting with cards that let you empty your hand on demand, like Call the Bloodline, Ravenous Bloodseeker, and even Murderer's Axe.

I've brewed up a few Standard Madness decks that look to take advantage of Lupine Prototype:

This deck includes Creeping Dread, which is a fantastic madness outlet and a way to grind down the opponent's hand towards empty and turning on Lupine Prototype. Call the Bloodline is the fastest and most reliable way to empty the hand, and because it can make many creature tokens, it seems like a natural pairing with Westvale Abbey to give this deck an alternate win condition.

The sideboard displays the value of Lupine Prototype as a large creature at a low cost even without combat, because its body can be sacrificed to Tormenting Thoughts to make the opponent discard far more cards than any other turn-two play would allow. It's a fantastic combination that will leave any opponent reeling, and it's a crushing plan against decks like R/G Ramp and W/B Control that will be helpless to react.

Lupine Prototype goes well with Avaricious Dragon, and that combination is the inspiration for this mono-red madness deck:

B/R Vampire Madness gets to take full advantage of Lupine Prototype with the best support cards in both colors:

Another thing to keep in mind is that Lupine Prototype can be found with Collected Company, so that's an entire world of possibilities in Standard. It's not clear how to actually take advantage of that fact, but maybe Eldritch Moon will provide new tools? It's also a Wolf creature type, which could prove valuable if the tribe is somehow supported. The large body of Lupine Prototype is also a great tool to fight with using cards like Dromoka's Command, so it's something to consider if any new fight cards are revealed in Eldritch Moon. How else can Lupine Prototype be used? What plans do you have for the card? Share your thoughts in the comments, and I'll try to answer any questions!