Disclosure: I know personally the directors, writers, subjects ... Okay, I know basically everyone involved in this film, dammit. That doesn't mean I won't speak honestly. Promise.

Enter the Battlefield: Life on the Magic – The Gathering Pro Tour is the new hour-long documentary effort from Nathan Holt and Shawn Kornhauser, the gentlemen behind Walking the Planes—those awesome Pro Tour tournament-story videos. Narrated by Wil Wheaton, the doc follows Reid Duke, Owen Turtenwald, Melissa DeTora, Patrick Chapin, Chris Pikula, and Shahar Shenhar (with a little Huey Jensen) on their year-long quest through the tournament Magic: The Gathering scene, culminating at the 2014 World Championship in Nice, France.

The film is compiled from outside interviews with the subjects, often conducted at the homes of the players, B-roll from tournaments gathered across various times, and some great narrative exposition from commentator Randy Buehler—the man knows his tournament stuff.

Each player has a slightly different path to the years' end, and has a slightly different goal. Some just want to be "the best;" Pikula wants to be inducted into the Pro Tour Hall of Fame; Shenhar is out to prove his success isn't just "little-kid luck;" and Chapin just wants to win the World Championship, dammit! The poor guy has achieved almost everything you could want in Magic, but only has a World Champs finals appearance, rather than a win. When he wins a Pro Tour and says it was just his qualifying tournament for the World Championship, you believe him. 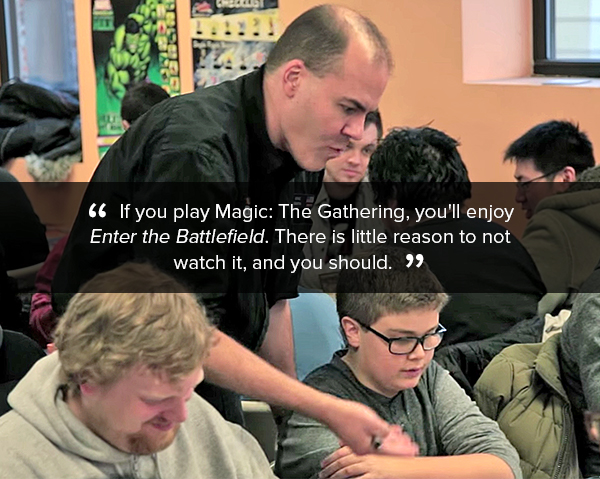 The film meanders through tournament appearances and outside life, interspersing the two artfully. Chapin gets to talk about his Pro Tour win, while Pikula, his Qualifier loss. From the 40-year-old father, to the barely collegiate, to the 20-something living at home, to the 30-something discussing the merits of eating fried chicken daily, many sides of the Magic tournament life are represented earnestly.

The film culminates with the young Shahar Shenhar rebuffing his little-kid luck by becoming the first ever back-to-back World Champion, defeating a now-two-time finalist Patrick Chapin. It was a great narrative year in Magic to follow, for sure. But how is it as a doc?

Before getting nit-picky, let's get this out of the way: If you play Magic: The Gathering, you'll enjoy Enter the Battlefield. There is little reason to not watch it, and you should. It is slickly produced and well-paced; it puts human faces on tournament names like "Owen Turtenwald" and "Patrick Chapin;" it provides context about why these competitors do what they do, what drives them; and quite frankly, it's a strong narrative regardless of your interest in tournament-level Magic. The documentarians got lucky in some of their choices to subjects to follow, including both World Championshipfinalists, and they pay it off well.

The documentary also serves an important function that should not be overlooked: It's the best current work to show outsiders the prestige, depth, and community surrounding this game that consumes us. Though the 65-minute runtime is ultimately disappointing, that length creates an incredibly small barrier to entry for true "muggles." This gateway was sorely missing in the community before. In the last week, I've had more conversations with non­-Magicians about Magic than I have in a long time. Exposure like this is important to the community, and I'm proud this documentary hit that mark so strongly. Does your Grandpa not understand what you do, and can't "install the Twitch?" Get him set up with this.

And as far as the actual narratives go, most are strong. Owen Turtenwald's provides context and relatability to someone often viewed as gruff, brusque, and well, un-relatable. Pat Chapin appears effervescent, with effortless intelligence—but you're never quite sure if he's using it for good or evil. Chris Pikula's story is the most sympathetic. He's a man truly in love with the game, fixated on his legacy, but is correctly held back by his outside life. And Reid Duke shows himself exactly who we all think he is—just a damn good guy. My friend said this of Duke: "Reid is like one workout, haircut, and generation away from being a Nickelodeon dreamboat. This century's [Jonathan Taylor Thomas]." 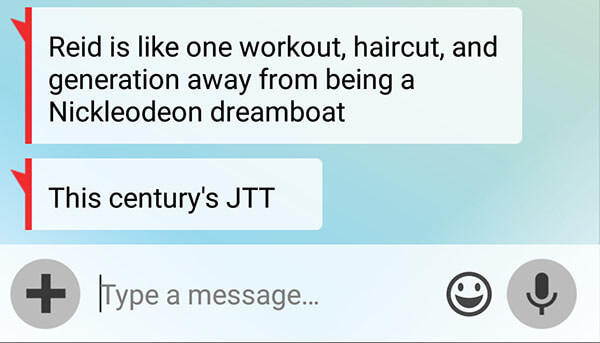 However, the other stories do leave something to be desired. Shenhar's family seems wonderfully kind and supportive, and DeTora's rise is amazing, but each are little more than moments in the doc, and don't build to a complete resolution. This understandably happens when you follow six people, but is disappointing nonetheless.

And the brisk length means many revealing, human moments are inevitably left out. Sure we get people explaining why they want to win, and etc., but where are more incidental revelations, like when Chapin raps on command? That sequence is one of the most subtle and telling in the doc—Chapin's slightly bombastic overreach revealing itself—and I want more of that.

Documentaries shouldn't always be about the gloss, and that's the only place where Enter the Battlefield falls short.

Perhaps it had to. The project was financed by Wizards of the Coast, and executive produced by a WotC representative, Greg Collins (Yes, he is my "boss"—and yes, he is a wonderful human who did an amazing job making the doc WotC would love made). There are differing motives for what a brand wants a doc to be and what a doc could be. The "gloss" is what WotC wants shown of their "premier play," encouraging more to engage in the tournament lifestyle. And that's exactly what we get—for better and worse.

The better means that we as Magic players are able to parade this movie around to help legitimize what we do, and it feels like an earned pat on the back for the community. The worse means that we're left with nothing more than glimpses of these pro tour faces, and are still looking at them through panes of glass.

Huey Jensen is in the movie, but doesn't get any story. What's it like to truly come back into the tournament scene after 30? What does he do when he's not hanging with kids sometimes a decade his junior? How does he feel about making Magic his life again? There are a few threads that skirt the problematic nature of committing your life to a game, but they aren't fleshed out, nor paid off.

Turtenwald gets background story, but little transformation or change. The death of his father must have been traumatizing and relatable to many of us. Where is that? And Melissa DeTora is a great part of the movie, and her story allows Magic fans to relive the same barrier-breaking joy we felt when she first Top-8ed a Pro Tour, but what about the difficulties? Not just what's great about being the most high-profiled woman in tournament Magic, but what's terrible?

Documentary profiles don't only get their power from relatable triumph, but also from relatable hardship. Though Duke and Turtenwald's mediocre finishes at the World Championship offer a modicum of that, with more struggle beforehand, those moments become transcendently sympathetic.

In the end, such critiques are minor ones, and no one is really to "blame" for them. Kornhauser and Holt chronicled journeys, and Collins helped craft those journeys to shine the most favorable light on a product we love. Knowing that, this doc could have been an hour-long commercial. But it isn't. Not at all. The balance struck between those sometimes-conflicting interests of a good story and a good image is laudable. And though there could have been more meat here, this doc shows there will be more in the future.

In that way, the title "Enter the Battlefield" stands not only for the competitors, but for the chronicling of tournament Magic. For years various people have unsuccessfully tried to make a documentary like this. And though Enter is imperfect, it has paved the way for others.

What about a documentary on Slovakian Magic? Because the prize money makes for a pretty good living in the country, a small community of players have made huge waves in the tournament scene. Or what about the rise of South American Magic? Or what about the various lives former Magic tournament players end up leading? These stories and others are more possible now—all thanks to Holt, Kornhauser, and Collins.

Stephen Hawking mentioned in the Acknowledgments of his seminal book, A Brief History of Time, that he was told his book sales would halve with each mathematical equation he wrote in. Recognizing that, he put only one: E= mc2. The book is still one of the best-selling science books of all time, with 147 weeks on the NYT Best-seller list, and 237 on London Times'.

There's real wisdom in that adage. Though we might want more tannins in our wine—the grit and acid that provides strong flavor—sometimes a drinkable, refreshing glass is the most appropriate. What more could we expect from an hour-long doc where Wil Wheaton explains what "spells" are?

The team has made something enjoyable, illuminating, and fun. Watch Enter the Battlefield to learn about the people you don't know, cheer for those you do, and get pumped about a game you love.