Vampires are no longer the dominating tribe in Standard. Unfortunately for Sorin, Imperious Bloodlord there aren't enough good Vampire friends for that tribe to continue being a major player in Standard right now. Ixalan and Rivals of Ixalan were known for supporting multiple tribes, but with those sets rotating out it looks like Eldraine will decide which tribes get to remain relevant. It is clear that there will be a Knights deck, as that is the creature tribe getting the biggest influx of strong creature from Throne of Eldraine.

I'm leading to a decklist, but first let's take a look further into the best available Knights in Standard. I will also break down the cards that could fit well in a Knights deck, without actually being Knights themselves.

There is a downside to playing Tournament Grounds though. It is going to make it tougher to cast your spells that aren't Knights or equipment. This forces you to limit the number of noncreature spells, and double-costed cards like Chandra, Fire Artisan or Gideon Blackblade become difficult inclusions. I see this as being similar to Humans in Modern, where we see lands like Ancient Ziggurat and Cavern of Souls.

Venerable Knight: This is a solid one-drop Knight. We knew we needed one-mana threats in this deck in order to be as aggressive as possible and curve out appropriately. This one fits the theme of a Knights deck perfectly. These days you expect your one-drop to be a 2 power creature with a little bit of an upside, and Venerable Knight fits that mold. There will generally be another Knight to put a counter onto if it dies.

Foulmire Knight // Profane Insight: This one I'm less sure about because it isn't as aggressively oriented. Being able to tack on the adventure is nice, but then you aren't casting it on turn one. I see Foulmire Knight working best in a more midrange Knights deck.

Fervent Champion: Here is a card that is going to be good if you have a lot of equipment in your deck, but I'm worried it could end up not seeing as much play as some think it will. There are other options at the one-drop slot, and while this one is clearly synergistic, it doesn't have 2 power on its own.

Blacklance Paragon: This is a solid two-drop that also gives you a mini-combat trick with your creature. It may end up being fairly easy to play around this effect, but having flash is never something to complain about. The lifelink is nice to help win a race, and deathtouch makes the smaller Knights more threatening. I definitely think it's good, but not necessarily an automatic four-of in every version of the Knights deck.

Worthy Knight: This is one of the big payoffs for having a deck full of Knights! Worthy Knight is very reminiscent of Hero of Precinct One. The more Knights in the deck the better it's going to be. We really have no reason to believe there can't be a deck with almost all Knights to play this with, making Worthy Knight a very impressive card.

Order of Midnight // Alter Fate: We have another example of a card that indicates the Knights decks will be perfectly capable of playing long games. A two-mana flyer that's a Knight is a good two-drop you are happy to cast. Later in the game the fact you can Raise Dead is pretty awesome, I really have nothing negative to say about this one.

Inspiring Veteran: This is probably the biggest payoff for playing red in your Knights deck. Two-mana lords are great in dedicated tribal decks, which is exactly what Knights is trying to be. We saw the power of Legion Lieutenant in Vampires, and Inspiring Veteran shouldn't be much different from that.

Steelclaw Lance: This has Knight synergy written all over it. I think of all the equipment this might be the one that's most synergistic with what the Knights deck is trying to accomplish.

Corpse Knight: We have an often forgotten Knight that already exists in Standard. This could be the time when Corpse Knight breaks out, though it still feels a little underpowered without you gaining any life on the trigger.

Smitten Swordmaster // Curry Favor: The Knights synergy here is nice, but I don't think it's powerful enough for Constructed, especially looking at the cards it's competing against.

Acclaimed Contender: This card is awesome, and should end up being a staple in Knights decks. It reminds me a lot of Goblin Ringleader. You are capped at being able to find one Knight, but that's okay because this is a three-mana play that impacts the board. You also get to dig five cards deep to find something, which makes it a pretty solid favorite to find something off the trigger. Overall, I think Acclaimed Contender is the Knight I am most excited about playing with, and there are a lot of good ones!

Murderous Rider // Swift End: This is one of the best Knights in the set, so the fact that it is a Knight is simply a huge bonus. The fact that it is double black for both the adventure and the creature is the only concern. Playing Murderous Rider means you need to think about the manabase, which could mean a two-color Knights deck, rather than the full three. The adventure part of this card is what puts it over the top. I expect to see a ton of Murderous Rider, both in and out of Knights decks.

Midnight Reaper: Midnight Reaper is a Knight! We have already seen this card be quite strong in Standard. This could end up as more of a sideboard card vs. removal-heavy decks, but there is a good argument to playing some maindeck too.

Oathsworn Knight: This card is solid, and may end up being matchup specific. I look at it as a three-mana 4/4, and then the other part of the card can be viewed as upside or downside. The damage prevention is good against sweeper effects like Gates Ablaze for instance, and it becomes very difficult to actually kill Oathsworn Knight with damage. Having to attack each turn is a drawback but not a huge one, because you want to be attacking every turn most of the time anyway. This is a fine card, but there is also a lot of competition for Knights at this casting cost.

Cavalier of Night: We have here a card that is quite powerful, and could definitely make sense in a deck that is capable of casting it. The Cavaliers are all Knights which is worth taking note of, as they've already been seeing some play.

The Circle of Loyalty: This is a super powerful card, and while it starts out at six mana, that shouldn't be the actual cost to cast it. The Circle of Loyalty is going to be a lategame powerhouse. Theoretically this could get cast on turn three, but more realistically it will generally be turn four or five. The fact that you can grab it off Acclaimed Contender is really nice, but on the flipside it doesn't go well with Tournament Grounds. It's also a little bit reliant on having other legendary spells to cast.

Embercleave: There is synergy with equipment in a deck like this, but the question becomes if the equipment are actually good enough to play. Embercleave is a very powerful card, but you really don't want to be paying six mana for it. This could be a good way to break a stalemate in a cluttered boardstate full of creatures. I see it working best alongside Fervent Champion. 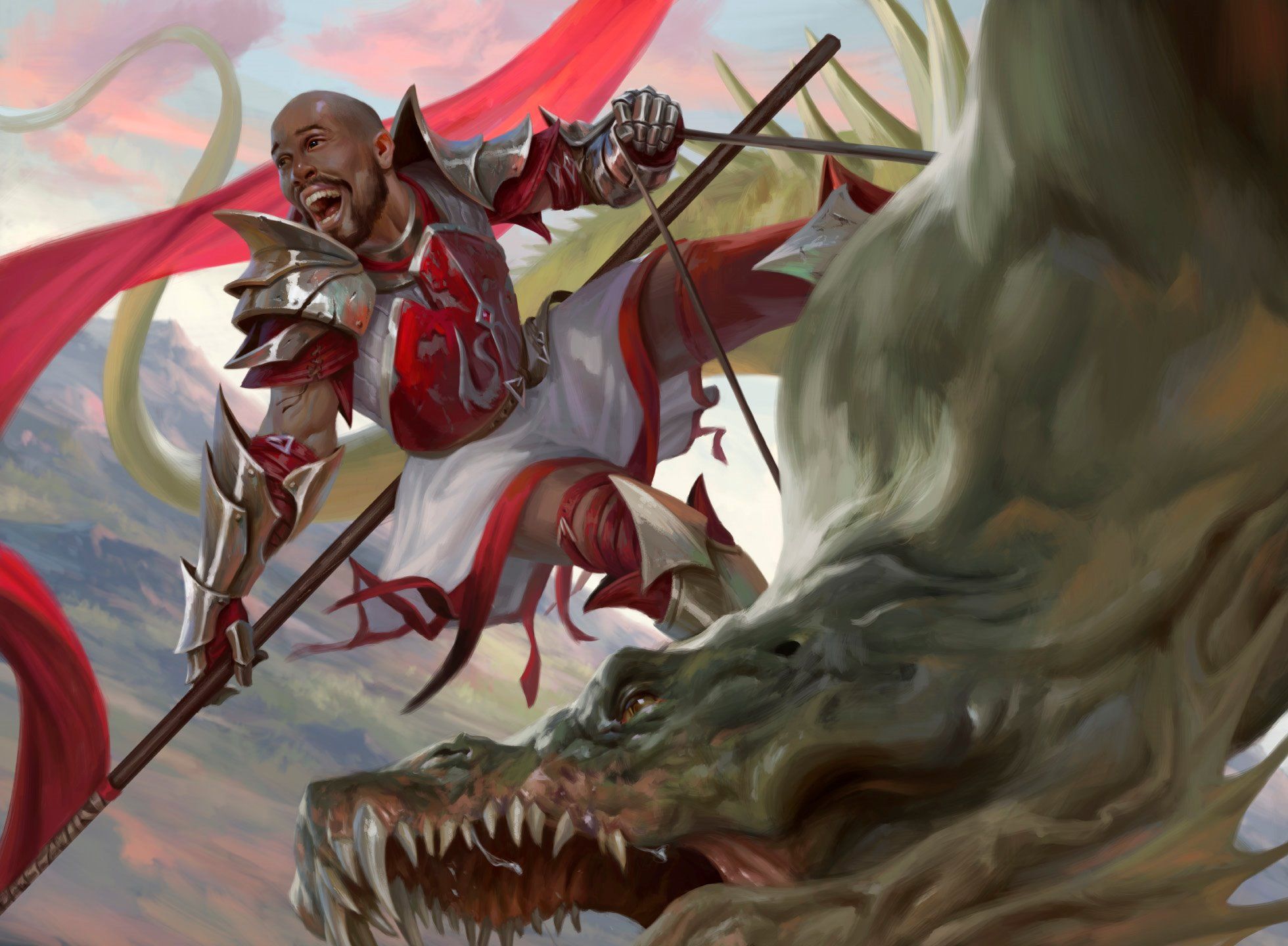 Okay, that is a lot of cards and I probably missed some! As you can see there are a ton of cards in the format that are going to work well in a Knight-themed deck. The issue is how to break these cards down into a 60 card deck. You could argue for going full Mardu, or cutting one of the colors for a slightly better manabase.

I'm going to start Orzhov to have good mana, and because I believe overall the white and black Knights are the strongest. This might not be the best direction though, as there are still plenty of good red Knights, and this is going to require some experimentation. You can still play Tournament Grounds in a two-color deck, but it loses some of its value for sure.

(I don't feel comfortable suggesting a sideboard for such a new format.)

There are some cards in this deck I didn't mention yet because I don't think they are specific to the Knights tribe. For example, Sorin, Vengeful Bloodlord is just a good card in Orzhov creature-based decks. This is a deck that can take full advantage of it, and I like it at a spot in the curve where there aren't many other good options. The manabase also includes some of the new lands.

I think we are going to see a ton of Fabled Passage. Being able to search your library for a basic that can potentially come into play untapped is a pretty big deal, and this works nicely alongside the Castles. This deck can win simply by being aggressive, but it's also a midrange deck that can play a very long game and make use of its mana each turn with adventure cards and the Castles. I think there is a way to put the red in and be a bit more aggressive, but in doing so you'll sacrifice some consistency.

Seth Manfield is a professional Magic player and member of both the Magic Hall of Fame and the 2019 Magic Pro League.