Today I am previewing an awesome new white creature in Amonkhet that features one of the trademark new abilities of the set – embalm. This isn't just a creature that might see play or that could fill a role in the metagame; I fully expect this creature to be a game changer in Standard. Meet Angel of Sanctions. 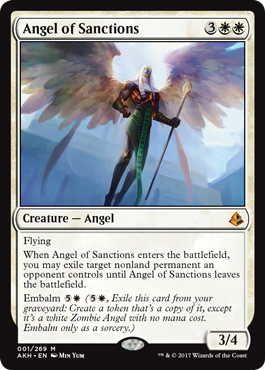 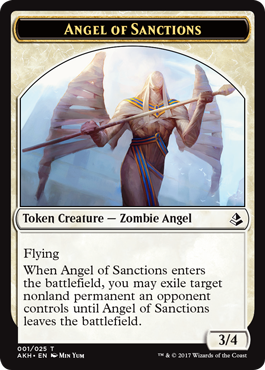 A 3/4 flyer for 3WW is a little underwhelming, but the body is certainly able to make an impact on most battlefields even at the stage of the game where you have access to five mana. So the body is certainly relevant, especially given that it flies, but even a 5/5 flyer for 3WW with no other abilities would not be good enough in Standard. So really the body only accounts for about half of what the card would need to do in order to actually be good enough to see play. Fortunately, the card has plenty of additional text.

The next ability to consider in terms of base stats is the ability to "exile target nonland permanent an opponent controls." Fiend Hunter and Banisher Priest saw quite a bit of play, at least in my own hands, but they only exile creatures. Oblivion Ring and Banishing Light saw even more play since exiling any non-land permanent the opponent might play adds an additional degree of flexibility that is often worth more than the small body attached to the card that only exiles a creature. Stasis Snare saw Standard play and it neither has a body attached, nor can it exile an artifact, enchantment, or planeswalker.

Angel of Sanctions can exile any of the above, just like Banishing Light, but also comes with a body attached, like Banisher Priest, but instead of just being a 2/2 creature on the ground, it's a 3/4 flyer!

Okay, so a 3/4 flying body with Banishing Light attached to it means really we're only paying an additional 1W for the 3/4 flying body since paying 2W for the Banishing Light effect is good enough on its own. But in reality this means is that Angel of Sanction is just a "must-kill" creature. If the opponent has no removal spell, you got great value and completely wrecked the opponent, but if they have the removal spell, it dies and they get their exiled permanent back! So essentially a single removal spell will undo all the work we did to get ahead, right?

But wait, the card still has more text!

If the angel is in your graveyard, you can pay its embalm cost of 5W and exile it to produce a token that is a copy of Angel of Sanctions. This means that even if the opponent has the removal spell, we can pay the embalm cost and do it all again! Let's do some math because the card economy starts to get a little confusing with this card.

Step 2: Opponent uses a removal spell to kill the Angel and get their exiled permanent back = back to even card advantage since the removal spell traded evenly with the Angel.

Step 4: Opponent uses another removal spell to kill our token and get their exiled permanent back = we're still ahead two-for-one since the opponent used two removal spells to trade with our one Angel of Sanctions.

So in terms of base stats, this card is brimming with card advantage and affects the battlefield in a major way. It demands a pair of removal spells to be dealt with or provides a sizeable flying body that also exiles the opponent's best permanent. It also is very flexible since it doesn't just exile creatures but can also exile planeswalkers, enchantments or artifacts. It is really a great deal for its cost!

So now that we know the card is good in a vacuum, how good is it in the current Standard metagame?

Angel of Sanctions in the Metagame – Dodging Removal

Let's start by considering the removal spells that are available and that see the most play in Standard and group them according to how effective they are against Angel of Sanctions:

These four common removal spells are straight-up bad against Angel of Sanctions. If you put enough counters on Walking Ballista you can deal with one half of our Angel and Fatal Push can kill the embalmed half, so in conjunction with another removal spell it can take it down, but really all four of these cards match up pretty horribly against Angel of Sanctions and yet they all see abundant play in Standard.

These removal spells are better, but are still bad because they only trade with half of the Angel. Ruinous Path can make for an okay trade if it turns a land into a 4/4; Fumigate can be okay if it also takes out another creature, and Unlicensed Disintegration will deal three damage; but really the player on the Angel side will come out ahead nearly every time against each of these removal spells, half of which see a ton of play in Standard while the others see a fringe amount of play.

These four removal spells are situationally good but can also be situationally bad, depending on the timing of each and what other cards are involved. For instance, Chandra can kill the Angel or the token with her -3 ability, but the Angel or the token can also exile Chandra – it really depends on which comes down first and what else is happening in the game. The same goes for Ob Nixilis Reignited.

Skysovereign, Consul Flagship won't kill the Angel or the token with its ability since it only deals three damage and Angel of Sanctions has four toughness, but it can also become a 6/5 flyer when crewed, which does match up well. But much like with the planeswalkers, if the Angel comes down second instead of first, it can exile the Flagship. If the Flagship is really a pressing problem, you can even chump block it with the Angel and then pay the embalm cost the following turn to make a token that exiles the Flagship. They would get the permanent back that was exiled by the Angel originally, but if it was another Flagship, the legend rule would cause one of them to die and then the token could exile the other one too!

Stasis Snare works in a similar fashion to these other three cards except that there is really no way to get ahead except in terms of mana since the Angel costs five mana and the Snare only costs three. It comes with the same liability in that if the Stasis Snare is already on the battlefield, Angel of Sanctions can exile it and release what was underneath it. Really, all four of these removal spells are better than everything else on the list at dealing with the Angel but will come out ahead only part of the time and will come out behind the other part of the time. So even these ones are not always great!

The one single removal spell that sees play in Standard that is actually good against Angel of Sanctions is Anguished Unmaking since it exiles instead of putting it into the graveyard, which means it cannot be embalmed for more value, and it does not leave behind a permanent that can be exiled by the Angel or its token (unlike Stasis Snare or the planeswalkers). That said, Anguished Unmaking really only sees play in Mardu sideboards. Things certainly may change, but as it stands, Angel of Sanctions matches up really well against nearly every removal spell being played in Standard.

Angel of Sanctions in the Metagame – Smiting Thee

So now that we know the Angel can dodge bullets, how does it match up as a removal spell against the other threats of the format? Grouped according to how effective Angel of Sanctions is against each, let's take a look at the most commonly played nonland permanents in current Standard:

Angel of Sanctions is exceptionally good against each of these cards. If you target Walking Ballista and then the Angel later dies, the construct will return with zero counters on it and immediately die. Scrapheap Scrounger can be brought back from the graveyard, so exiling it is especially good. Dynavolt Tower only does three damage, so not enough to kill Angel of Sanctions, and it is a convenient main deck answer to the Tower since it is basically a creature removal spell that is flexible enough to exile artifacts in matchups without creatures. Longtusk Cub has its counters reset and Greenbelt Rampager will cost its controller two energy when it returns. So Angel of Sanctions matches up really well against all five of these cards.

Angel of Sanctions does what it's intended to do against these cards. It's versatile in that it can exile a planeswalker (Gideon/Saheeli), an artifact ( Aetherworks Marvel), or a creature (Tireless Tracker/ Winding Constrictor). This versatility makes it good against creature-heavy decks or against creature-light decks and it provides a much-welcomed way to deal with artifacts or planeswalkers in the matchups that rely on such cards.

Against these cards it is only medium good and sometimes depends on the situation. Rogue Refiner, Whirler Rogue and Rishkar provide value when they come back, so in general you wouldn't want to target any of these three with the Angel's ability, but the body matches up well against each of them, so as long as there is another worthwhile target for the ability, it does in fact match up well against each of these three.

Angel of Sanctions can exile any of these three permanents for value, but all three can also be good at keeping Angel of Sanctions in check, depending on the board state. For instance, a flashed-in Avacyn can block Angel of Sanctions for decent value, although you can then just pay the embalm cost and exile the Avacyn with the token (or the permanent that came back, whichever is more important). Heart of Kiran and Aethersphere Harvester are easier to see coming since they are on-board tricks, but their size will keep the Angel from attacking for value.

These cards are all thus reasonable against Angel of Sanctions and you'll want to focus your other removal spells on being able to handle these threats – especially Archangel Avacyn at instant speed – if you're playing Angel of Sanctions in your deck.

The Gearhulks are really the only permanents that match up well against Angel of Sanctions. Targeting them is a liability since they produce a lot of extra value if they come back, and they each come with a body that is larger than the Angel's. Much like with Archangel Avaycn and the vehicles, as long as the removal spells you choose to complement the Angel with are good against the Gearhulks, Angel of Sanctions will pull its weight in all the other areas.

Given that it's still early in the spoiler season, I didn't want to produce a bunch of decklists that would quickly become obsolete as more cards get revealed. Rather I wanted to show you how the card itself matches up against all the most commonly played cards in current Standard. The exile effect is also especially good against other embalm tokens, so the Angel gets even better if people play cards with embalm. We also haven't even considered the value gained by putting the Angel into the graveyard by discarding it or milling yourself and thus being able to pay its embalm cost without ever casting it first.

In my estimation, Angel of Sanctions will be a major player in Standard. It is very flexible and its combination of abilities match up well against most of the cards that currently dominate Standard. Competing with Archangel Avacyn for a spot in the deck is a tall order, but it certainly has the stats to make it a close competition. And who knows, maybe there is room for both to coexist in the same deck? Oketra's Monument works great with both!