Wasteland and Force of Will were already announced as reprints in Eternal Masters, providing huge anticipation for the upcoming set, but apparently Wizards of the Coast didn't stop there. Today I'm excited to announce that after approximately twenty long years, one of my absolute favorite lands is finally getting reprinted—a legacy staple from Legends that somehow managed to dodge being placed on the Reserve List. I'm of course talking about Karakas! 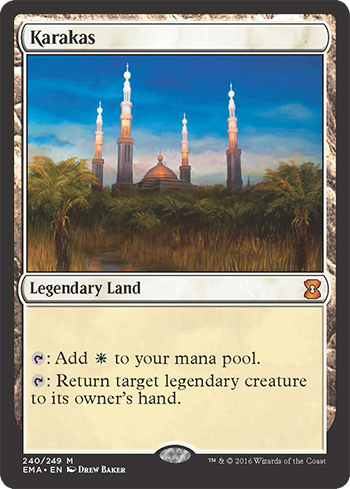 One of the main reasons Karakas is a Legacy mainstay is because it provides extremely efficient disruption to some of the format's most powerful strategies. It can bounce Emrakul, the Aeons Torn, Griselbrand, Iona, Shield of Emeria, or Elesh Norn, Grand Cenobite simply by tapping itself. It fits into so many decks because the cost to running it is so low. Many decks can afford to run at least a single copy of a legendary land that taps for mana, even decks that don't run white. For decks that run white spells, the colored mana is essentially an added bonus.

The two most popular strategies that are disrupted the most by Karakas are those based around reanimating huge legendary monsters from the graveyard and those using Show and Tell to put them onto the battlefield from hand.

The Reanimator deck uses Entomb and either Faithless Looting or Careful Study to get a huge creature into the graveyard. It then uses a reanimation spell such as Reanimate, Animate Dead, or Exhume to put that creature onto the battlefield from the graveyard.

Karakas is able to bounce Iona, Shield of Emeria, Elesh Norn, Grand Cenobite, or Griselbrand, without even being affected by a revealed Chancellor of the Annex. It won't bounce Sphinx of the Steel Wind or Grave Titan, but it will conveniently provide the white mana to cast Swords to Plowshares on either of those with its other ability.

While Karakas is great at disrupting the opponent by bouncing their large monsters, it can also be used to protect your own legendary creatures from opposing removal spells or saving your creature from losing a fight in combat.

Thalia, Guardian of the Thraben is one of the most disruptive creatures in Legacy for a lot of decks in the format. Storm decks can't win through it, Delver decks are slowed to a halt by it, and most any deck will want to remove Thalia from the battlefield in any way possible. Since Thalia is legendary, Karakas can conveniently tap to return Thalia safely to hand, protecting her from the removal spell. Then AEther Vial can return her back to the battlefield immediately, even before the spell that attempted to remove her is still on the stack waiting to fizzle.

In addition to saving your own creature or bouncing an opposing creature, some decks use Karakas to bounce their own creatures for value.

Vendilion Clique and Venser, Shaper Savant are legends with useful enters the battlefield abilities. Some Miracles lists run these creatures to continuously disrupt the opponent and thereby gain extra value from their Karakas, a card they were already running anyway for its disruptive capabilities.

Since Karakas provides so much utility, some decks run ways to search out the land, most notably Knight of the Reliquary.

Knight of the Reliquary, and sometimes Crop Rotation, use Karakas as part of a toolbox strategy that aims to search out a key land that disrupts the opponent's strategy, whether that land is Karakas against Emrakul, the Aeons Torn/Griselbrand, Bojuka Bog against graveyard-based decks, or simply a series of Wastelands to destroy all the opponent's lands. This particular deck runs Green Sun's Zenith which can find Knight of the Reliquary which can find Karakas. This makes the single copy of Karakas in the deck a reliable answer to opposing Reanimate or Show and Tell strategies.

Other decks not only use Knight of the Reliquary to find Karakas but also Life from the Loam to get it back in case it happens to get destroyed by an opposing Wasteland.

The Aggro Loam strategy aims to lock opponents out of the game. It uses Chalice of the Void, usually on 1, to slow down or in some cases essentially lock out the opponent. It also uses Green Sun's Zenith to find Gaddock Teeg, Scavenging Ooze, or Knight of the Reliquary. It then uses Knight of the Reliquary to find any of the following:

What separates this strategy from the previous Knight of the Reliquary deck is that it also runs Life from the Loam to get all those lands back from the graveyard, which works especially well with Verdant Catacombs, Wasteland and the cycling lands since each of these lands produce value by sacrificing or discarding. Life from the Loam can be dredged back, which puts even more lands into the graveyard to get back.

Whether you are protecting your own creatures (Thalia, Guardian of Thraben / Gaddock Teeg), bouncing your own legends for value (Vendilion Clique / Venser, Shaper Savant), or bouncing an opposing threat (Emrakul, the Aeons Torn, Griselbrand, Iona, Shield of Emeria, Elesh Norn, Grand Cenobite), Karakas does all this at the minimal cost of simply tapping, which is quite a strong rate considering its other ability taps for white mana. This is certainly a card you will want to open anytime you crack a pack of Eternal Masters!

I will now close with an ode to my beloved Karakas:

You work so hard and do so much,
But truth be told, you had me at
"Taps for white mana."