Depending on how many toes you have in the Magic waters, you might be familiar with Magic's Hall of Fame. You might even be aware that you, dear reader, currently have a vote in this year's Hall of Fame class, the ballot to which can be found here.

As much as we'd love to tell you to just vote for your favorite eligible TCGplayer columnists (cough, cough), instead, we're going to try and fill you in on the Pro Tour Hall of Fame, why we think it's sweet, and why you should want all the info before you vote.

So what is the Pro Tour Hall of Fame, anyway?

Taken directly from the official Pro Tour Hall of Fame page on the mothership:

tl;dr: If you do well enough at Magic over a long enough period of time, you get immortalized in the Hall of Fame.

Right now, there are 39 powerful wizards that make up the Hall of Fame.

Voting happens once a year, and it's normally limited to a select few people within the Magic community.

What do people in the Hall of Fame get?

Being a Hall of Famer objectively rules. As a member of the Hall, you get

· An invite to every Pro Tour forever and ever (They're hard to qualify for!)· $1500 appearance fee at every Pro Tour (Free money just for showing up!)· Three byes at every Grand Prix (Start out every Grand Prix with three free wins!)· The prestige of being in The Hall Of Fame (GRITTY INTANGIBLES!)· 15 QPs in every MOCS season (Magic Online stuff)

tl;dr: Folks in the Hall get a lot of awesome stuff. Not only that, but they also represent the game we love as ambassadors of play at the highest-possible level. For muggles, Hall of Famers are the starting reference point for Magic players. Because of all this, we should be real picky about whom we're voting in.

There are no specific requirements to be added to the Hall of Fame, but players have traditionally had a strong history of tournament performance. Ultimately, it's up to the voters to decide what statistics make a player worthy, so let's look at some data for current members, to give you a point of reference. 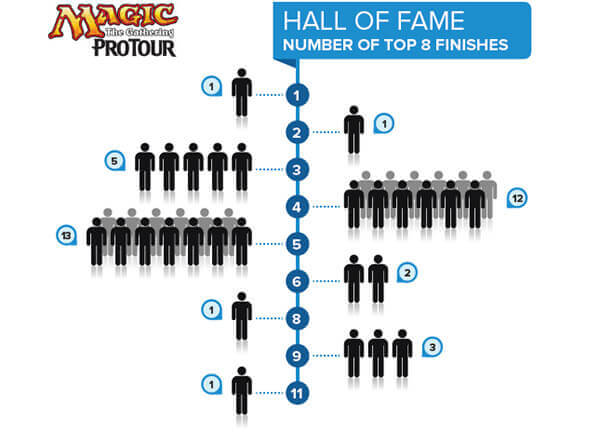 A quick note on the Pro Tour – just getting the opportunity to play in one is hard. There are only a few ways to qualify to play in one, and once you're there, you're playing against other people who had to undergo grueling processes themselves to qualify – you're playing against the best of the best. Maintaining a winning game percentage against the field over any period of time, let alone making Top 8 at all, is absurdly difficult. Magic is a hard game.

At this point, it's worth taking a look at the low-end exceptions and discussing how they got into the Hall of Fame. There are only two exceptions to what we'll call The Three-Four-Five Rule:

· Only one Top 8: Randy Buehler. Basically, Randy's career was cut short thanks to getting hired by Wizards of the Coast, but his contributions to the game are unrivaled and his median finish (which we'll get to) is virtually untouchable, with five Top 16s in 12 career Pro Tours.· Only two Top 8s: Raphael Levy. The current all-time leader in Pro Points by a healthy margin, Raph's stats are buoyed by his incredible longevity within the game. Levy also holds the record for most Pro Tour appearances, with 86 out of a possible 97.

It just now occurs to me that the first Pro Tour of the '16-'17 season will be the 100th Pro Tour. I wonder if Wizards of the Coast has anything planned for that. 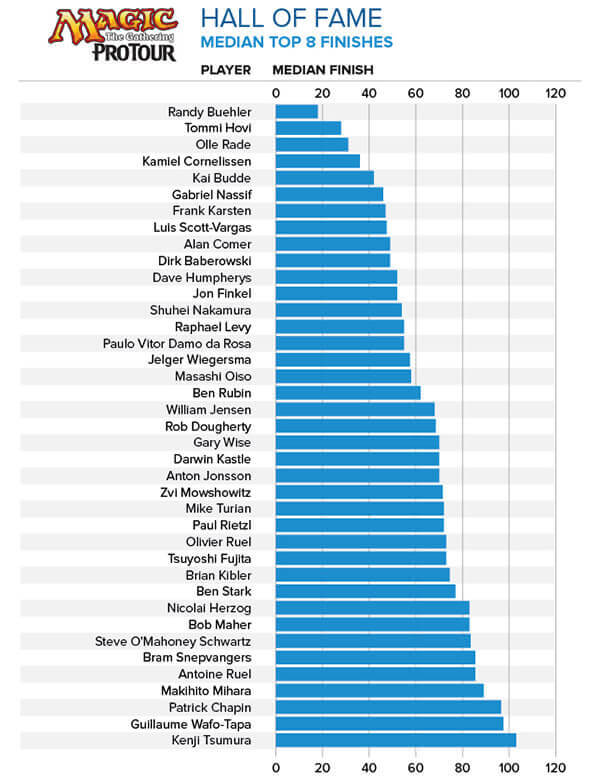 In this chart, the lower number is best, because it represents the best finish; you go into a tournament wanting to finish as number one, so 18 is better than 118, and so on. Most players with a good overall median either don't have many years on the Pro Tour (Tommi Hovi, Olle Rade) or are simply so good that they defy all logic and reason (Kai Budde, Gabriel Nassif).

Randy Buehler is more former than latter; 12 Pro Tours means his sample size is pretty small, but I think 12 Pro Tours (a little less than three years) is still a fine sample. Doing well at any tournament requires some luck, but a Top 32 median finish over 12 Pro Tours (Randy's median is actually 18) isn't all luck, and to assert otherwise is crazy.

There are more criteria to think about than just Pro Tour Top 8s and median finishes. Those are just the tip of the Iceberg, and we're giving them to you in order to try and get you thinking statistically as well as intuitively. Three-year median, career earnings, career Pro Points – the criteria you can use to evaluate players are endless. The Pro Tour Hall of Fame is a big deal to us, and we'd rather have you taking more into account when evaluating your ballot, instead of less.